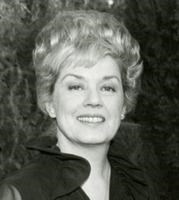 BORN
1930
DIED
2021
ABOUT
Northeast High School
FUNERAL HOME
Floral Hills Funeral Home and Floral Hills Cemetery
7000 BLUE RIDGE BLVD
Kansas City, MO
Vallera (Val) Clough Ross
June 4, 1930 - August 22, 2021
Olathe, Kansas - Vallera (Val) A. Clough Ross
Vallera A. Clough Ross, 91, a lifelong resident of Kansas City passed away August 22, 2021, at Santa Marta Assisted Living facility.
Val was born June 4, 1930, the only child of Everett and Clara Clough. She and her husband, John, enjoyed 33 years of marriage together. She graduated from Northeast High School in 1947 and went on to earn a bachelor's degree from Baker University. While at Baker University she became a lifelong active member of Zeta Tau Alpha Fraternity.
Val gave her heart and soul to Zeta Tau Alpha Fraternity. She was initiated at Sigma Chapter (Baker University) on Feb. 19, 1948. She served as Province President XII-A (Missouri and Kansas) from 1966 to 1972. From 1970 to 1972, she also held the role of Alternate Panhellenic Delegate I, before being appointed to serve as National Panhellenic Conference Delegate for the 1974 to 1976 and 1976 to 1978 biennia. In 1978, the position became an elected member of National Council, and Val was ZTA's first elected NPC Delegate. After retiring from National Council, she again served as Alternate Panhellenic Delegate I until 1987. In 1996, she joined the Foundation's Scholarship Committee, serving until 2008. She chaired the National Council Nominating Committee in 1974 and 1994.
Val received the Certificate of Merit in 1974, the Honor Ring of Zeta Tau Alpha at Convention 1970, and the Order of Shield, representing 50 years of membership, at Missouri-Kansas Zeta Day in 1998. In 1980, ZTA established the Vallera Clough Ross Panhellenic Award for a collegiate chapter in honor of Val's six years as NPC Delegate. In 1998, in honor of her 50 years of membership and the Fraternity's Centennial, Val established the Vallera Clough Ross Endowed Scholarship for a member of Sigma Chapter.
Val was preceded in death by her husband, John. She is survived by three cousins, Richard Clough, John Morthland and Marilyn Ragan. She will also be remembered by her lifelong friend Gary Lovell (Sherry) and the children of her lifelong friend Donna Cook Critchlow.
A graveside service will be held Saturday, September 25th at 11:00 am at Floral Hills Cemetery, 7000 Blue Ridge Blvd, Kansas City, MO, 64133. In lieu of flowers it is suggested that memorial contributions can be made to Zeta Tau Alpha fraternity (ZTA Foundation), 1036 S. Rangeline Road, Carmel, IN 46032, or Wayside Waifs of Kansas City, 3901 Martha Truman Road, KCMO, 64137