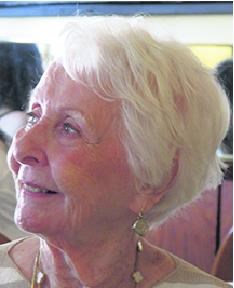 BORN
1926
DIED
2018
ABOUT
Hyde Park High School
Virginia L. Brown Virginia Lippert Brown, 92, quietly passed away on July 29, 2018. Virginia (Gini) was born on March 29, 1926 in Chicago, Illinois to Maurice and Frances Lippert and joined her older sister, Marjorie Lippert Callen. Virginia attended Hyde Park High School and went on to the University of Illinois, Urbana- Champaign where she was an English major. Virginia believed in and taught her children the value of volunteerism. She was a docent at the Nelson-Atkins Museum of Art and worked in Menorah Hospital coffee shop. Together with her then husband, Maynard H. Brown, she was a founding member of The New Reform Temple and on the board for many years. She was also on the board of Planned Parenthood, Main Stream Coalition, The League of Women Voters and The National Council of Jewish Women. Her greatest contribution was the founding, in 1997, of The Virginia Brown Community Orthodontic Partnership, now known as Smiles Change Lives. Teased as a child because of her crooked teeth, Virginia was determined that other adolescents would have the orthodontia she couldn't afford until she was in her 20s. The Virginia Brown Community Orthodontic Partnership was established as a community-based orthodontic program to help children from families who could not afford the full cost of braces. SCL has grown into a national organization with close to 750 orthodontists participating and nearly 10,000 children have received life-changing orthodontic treatment. This brought her tremendous joy. Virginia met Maynard H. Brown in college and moved to Kansas City. They had three children: Thomas C. Brown (Bet) and children with his first wife, Margaret Thomas are Alexander T. Brown (Kristin) and Andrea T. Brown; Andrew L. Brown (Pat) and their children Leslie B. Mische and Megan B. Bennett (Jesse); and Patricia B. Glenn (Michael J. Pronko, M.D) and children with her late husband, Christopher A. Glenn are Eliot A. Glenn and Virginia Glenn Conley (Jaimie). There are seven beloved great grandchildren. She also leaves her nephews, Dr. John Callen and Peter Callen, M.D. Virginia married the late Maurice L Brown with whom she traveled extensively and took up residence in both Palm Beach, Florida and Kansas City. Virginia was a life-long bridge player, golfer, a member of Four Arts Society, Governor's Club and Palm Beach Country Club. In Kansas City she was a member of Oakwood Country Club and Carriage Club. She was a voracious reader, loved a good political debate, had a wry sense of humor and loved her family. Virginia was a valuable woman to the community, to her causes, her friends and most of all, her family. She will be remembered in our hearts. Thank you to the caregivers who made her so comfortable and cared for her so much. A memorial service will be held at 1:00pm Friday, August 3, 2018 at Louis Memorial Chapel, 6830 Troost Ave, Kansas City, MO. Private family inurnment. In lieu of flowers, memorial contributions may be made to Smiles Change Lives, 2405 Grand Blvd, Suite 300, KCMO, 64108. Online condolences may be left at www.louismemorialchapel.com. (Arr: The Louis Memorial Chapel 816-361-5211)
To plant trees in memory, please visit our Sympathy Store.
Published by Kansas City Star on Aug. 1, 2018.
MEMORIAL EVENTS
Aug
3
Memorial service
1:00p.m.
Louis Memorial Chapel
6830 Troost Avenue, Kansas City, MO 64131
Funeral services provided by:
Louis Memorial Chapel
GUEST BOOK
Sponsored by Kansas City Star.
3 Entries
Here's to Gini. She had a will like no other. She will be remembered for her intelligence, taste and candor and she will be missed for her friendship.
Terri Henges
August 3, 2018
Our sincerest condolences to the family - what an amazing legacy she has left with her foundation...not just to the local community, but to kids nation-wide!