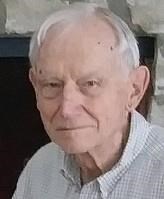 BORN
1927
DIED
2020
Webster E. Schott
September 8, 1927 - December 26, 2020
Lake Quivira, Kansas - Webster Schott, greeting card executive and writer, died at the age of 93 on December 26, 2020 at his Lake Quivira, KS home.
Webster began his career in advertising, working for Potts-Woodbury, Inc. and Roberts & Smith, Inc. in Kansas City. In 1959 he was hired by Joyce Hall at Hallmark Cards as Vice President, Executive Editor and Publisher. In 1972 he left Hallmark Cards and co-founded April House with his friend Herbert Jacobs. April House was a publisher and manufacturer of paper and wood gift products. From 1976 to 1979 he was Vice President of Creative, Research, and Product Analysis at American Greetings Corporation. From 1979 to his retirement in 1987 he was Vice President of Marketing and Creative Services at Gibson Greeting Cards in Cincinnati.
Webster was a freelance journalist, contributing book reviews and articles to New York Times Book Review, Washington Post Book World, Saturday Review, LIFE magazine, TIME magazine, New Republic, The Nation, Christian Science Monitor, St. Louis Post-Dispatch, Kansas City Star and others. He edited "Poetry for Pleasure" and "Imaginations," and wrote the introduction to Dean Walley's book "Out of Hannibal." He knew many literary figures including poets William Carlos Williams, W.H. Auden and Winfield Townley Scott, and author Evan S. Connell. He recently had the pleasure of sharing his insights and Connell's letters with Kansas City writer and editor Steve Paul who is completing a book about Connell.
Webster was born on September 8, 1927 in Belleville, Illinois. His father and mother were Adolf Webster Schott and Esther Christmann. He spoke often to his children about growing up in poverty with his brother Noel, his father's strong work ethic, his mother's compassion, and his uncle who was an avid reader and fostered his interest in books. As a young child with rheumatic fever and resulting bedrest, he became a voracious reader and lover of literature. The first family member to obtain a college degree, Webster graduated with a Bachelor of Journalism degree from the University of Missouri in Columbia in 1948. He met his wife, Naoma Jean Wachter, at the University of Missouri in 1945. They were married for 67 years until her death in 2016. He never stopped missing her.
Webster was proud of being a founding member of the ACLU in Kansas City. He was also proud of his literary coverage of the equality and civil rights movements. In 1967, two years before the Stonewall Riots, he wrote an article entitled "Civil Rights and the Homosexual: A 4-Million Minority Asks for Equal Rights" which was published in The New York Times. In the early 1970s he was a member of the Literary Advisory Panel of the National Endowment for the Arts.
Webster is survived by his three children (Marya, Romaine, and Eric), six grandchildren, four great grandchildren, his niece, his caregiver Lois Jones, and longtime friend Lewis Casson. Private funeral arrangements are pending. His family suggests contributions to Planned Parenthood of Great Plains, Kansas Advocates for Better Care and KCPT/KCPBS.
For more information and to leave condolences, visit: www.MtMoriah.net

To plant trees in memory, please visit our Sympathy Store.
Published by Kansas City Star on Jan. 10, 2021.
MEMORIAL EVENTS
No memorial events are currently scheduled.
To offer your sympathy during this difficult time, you can now have memorial trees planted in a National Forest in memory of your loved one.
GUEST BOOK
3 Entries
My closest and dearest friend for over 50 years, I am consumed with grief and bereft, We talked practically every day and never ran out of subjects to discuss with each other. What a lucky person I am to have had such a dear friend, I miss him dearly.
Lewis casson
Friend
February 12, 2021
So sorry to learn of Web's passing. He was a close friend of my parents and I remember many an evening with Web and Nan and my folks debating politics, art and world affairs. When I was young he intimidated me with his direct questions, but now looking back I appreciate his incisive intellect. Warm regards to the family.
David Price
January 21, 2021
Web was good friend, who was open to hearing anyone's ideas. He was a real gentlemen, he will be missed.
Dan Haake
January 11, 2021