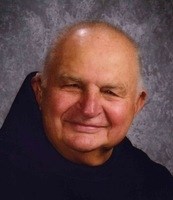 BORN
1931
DIED
2021
FUNERAL HOME
The Daleiden Mortuary
220 N. Lake Street
Aurora, IL
Bernard Schaefer, O.S.B.
Born: January 13, 1931 in Aurora, IL
Died: July 19, 2021 in Aurora, IL
Father Bernard Schaefer, OSB, age 90, a Benedictine monk of Marmion Abbey, Aurora, Illinois, died peacefully in the Lord on the nineteenth of July, 2021. Raised in a loving family with eight siblings, he is survived by members of his monastic family, his brother Raymond and his sisters Regina Esser and Anne Deutsch and many nieces and nephews. He was preceded in death by his parents, Jacob and Anna (Weigel) and by his siblings Albert, Katharine, Frederick, Barbara, Dolores and Mary Ann.
Father Bernard was born in Aurora, Illinois on January 13,1931. He was baptized with the name of John at St. Joseph Church in Aurora. He attended Marmion Military Academy for one year and then attended St. Meinrad Seminary, graduating in 1950, having completed the seminary's high school and 2 year philosophy programs. In 1950 he entered the newly established Marmion Abbey in Aurora and professed his first vows on August 6, 1951 and took the name of Bernard. After studies at St. Procopius Seminary, he was ordained to the priesthood on May 26, 1956. In the following years he earned a Master of Education degree and a Master of Arts degree in counseling.
In his final few years of declining health, Father Bernard was less active due to his physical limitations. Yet, he remained faithful as much as possible to daily prayer and to the abbey's community life. He loved his community and even with his failing health maintained a good spirit and sense of humor.
Father Bernard's body will be received by his monastic brothers and family on Thursday, July 22, at Marmion Abbey's Church of St. Augustine of Canterbury at 4:00 p.m. Visitation will be from 4:00 p.m. until 8:00 p.m. in the Abbey Church at 850 Butterfield Road, Aurora, Illinois. The Office of the Dead will be prayed at 6:30 p.m. Visitation will continue on Friday, July 23, from 9:00 a.m. until the Mass of Christian Burial at 10:30 a.m. Burial will follow in the Marmion Abbey Cemetery.
Arrangements were handled by The Daleiden Mortuary, 220 N. Lake St. Aurora, IL. 60506. For more informationor to sign the virtual guest book or leave condolences, please visit our website at daleidenmortuary.com
To plant trees in memory, please visit our Sympathy Store.
Published by Kane County Chronicle from Jul. 20 to Jul. 22, 2021.
MEMORIAL EVENTS
Jul
22
Visitation
4:00p.m. - 8:00p.m.
Marmion Abbey's Church of St. Augustine of Canterbury
850 Butterfield Road, Aurora, IL
Jul
23
Visitation
9:00a.m. - 10:30a.m.
Marmion Abbey's Church of St. Augustine of Canterbury
850 Butterfield Road, Aurora, IL
Jul
23
Mass of Christian Burial
10:30a.m.
Marmion Abbey's Church of St. Augustine of Canterbury
850 Butterfield Road, Aurora, IL
Funeral services provided by:
The Daleiden Mortuary
MAKE A DONATION
MEMORIES & CONDOLENCES
Sponsored by The Daleiden Mortuary.
0 Entries
Be the first to post a memory or condolences.