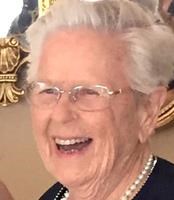 BORN
1927
DIED
2021
FUNERAL HOME
Moss Family Funeral Home - Batavia
209 South Batavia Avenue
Batavia, IL
Nancy Evans Carlson
Born: January 26, 1927 in Evanston, IL
Died: July 5, 2021 in St. Charles, IL
Nancy Ellen Evans Carlson, 94, of Marathon, Florida, formerly of Batavia, IL passed peacefully on July 5, 2021 at Inspirations Senior Care Home in St Charles IL.
Nancy was born in Evanston, IL, January 26,1927 to Esther (Carlson) and Nelson James Evans. At an early age she was a formidable Tennis and golf player and was allowed to tag along with her stepdad, Fred T. Greaves and warm up and shag balls with players at the Chicago Golf and Tennis Club. She was a graduate of Evanston High School in 1944 and she graduated with English and Chemistry degrees from Wellesley College in 1948 and a Master's Degree at Northwestern University in 1950. Where she was a member of Zeta Tau Alpha Sorority, Chapter Alpha Phi. She then taught English and Chemistry at Mooseheart. While living with family in the area she went to look for a car in Aurora and the salesman was impressed and passed her number on to his best friend from Batavia- Arvid Carlson. She took the date. They built a house on McKee St, expanded their family from 2 to 5 and their years together were filled with Shared Birthdays, Master Bridge games, Batavia Dance Club, Gourmet Dinner Club, Fishing trips to Minnesota. She obtained her pilot licenses and flew extensively with her husband Arvid who had been an Army ATC Pilot in WWII.
Nancy had a great commitment to the Batavia community. She was a 4-H Leader for the Batavia Belles and involved in Zonta and Panhellenic as well as being a 15- year member of the Batavia Library Board, DuPage Library Board and the State Library Board and was proud in making the Batavia Library one of the best in the state. Long winter visits starting in 1975 became permanent when they moved to Marathon, Fla., in 1982.
This started a love affair with Tropical breezes, Boating and Deep-Sea Fishing on their Boat the CAN DO. She and Arvid were 30 plus year members of the Marathon Yacht Club, Marathon, FL. July 12, 2021, would have marked their 69- year anniversary. They are again together on the dance floor. Nancy was a 70-year plus member of P.E.O. Sisterhood, with 50- Plus years of that being a member of PEO Chapter E.A. in Batavia, IL and a most recent member of the Florida Keys P.E.O. Group in Marathon, Florida. She was a Mom Carlson to several and a loving Mother and Grandmother. She was adored by everyone who knew her.
She is survived by her 3 children Kermit (Caron) Carlson, Bonnie (John) Higgins and Connie (Kelly) O'Brien, 7 Grandchildren -Kristen (David) Coghlan, Barbie Carlson, Brittany (Vince) Coyle, John (Melanie) Higgins, Kyle (Sarah) O'Brien, Cooper O'Brien and Carter O' Brien and 2 step grandchildren, Ronald (Melody) Modesto and William (Erin) Modesto and 6 great grandchildren and several nieces, grad- nieces and nephew.
She is preceded in death by her Father- James Nelson Evans, Mother-Esther C. Evans Greaves, Stepfather- Fredrick T. Greaves, Aunts -Ellen O. Carlson and Ruth E. Carlson, Brother- Thomas M Evans, Sister-in-law- Anne Evans, Brother-in-law- Verner Carlson.
In lieu of flowers, donations can be sent to Bethany Lutheran Church, Batavia, IL, Batavia Library Batavia, IL or a charity of your choice. Interment was private; A celebration of life will be held at a later date. Arrangements entrusted to Moss Family Funeral Home, Batavia, IL (630) 879-7900 or www.mossfuneral.com

To plant trees in memory, please visit our Sympathy Store.
Published by Kane County Chronicle from Jul. 8 to Jul. 15, 2021.
MEMORIAL EVENTS
No memorial events are currently scheduled.
To offer your sympathy during this difficult time, you can now have memorial trees planted in a National Forest in memory of your loved one.
Funeral services provided by:
Moss Family Funeral Home - Batavia
MAKE A DONATION
Please consider a donation as requested by the family.
MEMORIES & CONDOLENCES
Sponsored by Moss Family Funeral Home - Batavia.
2 Entries
So many, many memories......Batavia, Burntside, picking leaves for a school project at her mother's, and more. I loved her and I will miss her.
Claire Taylor
July 10, 2021
Our thoughts and prayers to Kermit and his family during this difficult time. Dean & Tamie
Dean Holste
July 9, 2021
Showing 1 - 2 of 2 results