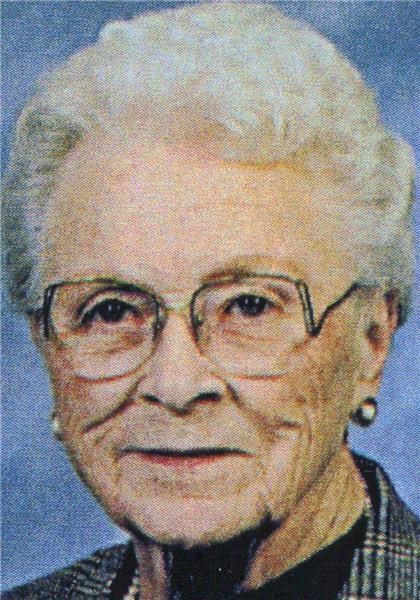 FUNERAL HOME
Horner Lieske McBride & Kuhl Funeral Home
2421 Ave. A
Kearney, NE
KEARNEY - Dorothy M. Bond, 100, of Kearney died Saturday, Nov. 20, 2021, at Mother Hull Home in Kearney.
Funeral services will be 2 p.m. Wednesday at Horner Lieske McBride & Kuhl Funeral and Cremation Services with the Rev. Dean Pofahl officiating.
Burial will follow the service at Kearney Cemetery.
Visitation will be one hour prior to the service.
--
Dorothy was born July 27, 1921, on a farm north of Odessa to Adolph and May (More) Holoubeck.
Dorothy went to a one-room schoolhouse through the eighth grade. The district then closed the school because of low population of children. Her brother, Archie, drove the kids to Odessa until he graduated; then Dorothy drove the kids of the closed district to school. She attended Odessa High School for the rest of her schooling.
On Sept. 5, 1939, she married Bernard Bond. The next day after their wedding, they left for Nampa, Idaho, where work was available. They lived there for two and a half years and then came back to Nebraska. Bernard began farming in the Kearney area and Dorothy helped with the livestock business. She also raised chickens and had a large garden. She always canned a volume of vegetables from the garden, fruit and meat and all jars were full at the end of the growing season.
Dorothy was a 4-H leader for several years; teaching cooking and sewing to the local children. She always felt that 4-H is a good program for the young folks.
In 1972 the Bonds bought another farm and quit the livestock business and went to row crop farming. She helped in the fields at that time, running a tractor and helped getting the corn out of the field in the fall.
Because of Bernard's failing health, they retired from the farm in 1977 and built their home in Kearney. They "wintered" in Mesa, Arizona, for 10 years. Bernard passed away Jan. 19, 1987.
Dorothy became a Methodist when she married Bernard and belonged to the First United Methodist Church, United Methodist Women and Together Sunday School Class. She belonged to Elizabeth Valley Kensington and Kearney China Painters Club. She loved painting her beautiful china. Other hobbies were gardening, lawn work, playing cards, square dancing and ballroom dancing. She enjoyed being with her family.
Survivors include her daughter, Marie and Irv Reiter of Kearney; grandchildren, Linda and Ray Manfull of Valley Center, Kansas, Lori Reiter of Kearney, Paula and Lannie Marzolf of Kearney; great-grandchildren, Taylor Manfull and fiancé Brian Dukes of Wichita, Kansas, Steven Manfull and fiancée Rachel Lydon of Overland Park, Kansas, and Jenna Marzolf of Axtell.
Dorothy was preceded in death by her husband, Bernard Bond; daughter, Donna Day; grandson, Larry Day; sisters, June Harpham, Emily McCan and Esther Reynolds; and brother, Archie Holoubeck Sr.
Memorials are suggested to Mother Hull Home, where Dorothy had lived for the past five years.
Visit hlmkfuneral.com to leave condolences.
Published by Kearney Hub on Nov. 24, 2021.
To plant trees in memory, please visit the Sympathy Store.
MEMORIAL EVENTS
Nov
24
Funeral service
2:00p.m.
Horner Lieske McBride & Kuhl
2421 Avenue A, Kearney, NE
Funeral services provided by:
Horner Lieske McBride & Kuhl Funeral Home
MAKE A DONATION
MEMORIES & CONDOLENCES
Sponsored by Horner Lieske McBride & Kuhl Funeral Home.
0 Entries
Be the first to post a memory or condolences.