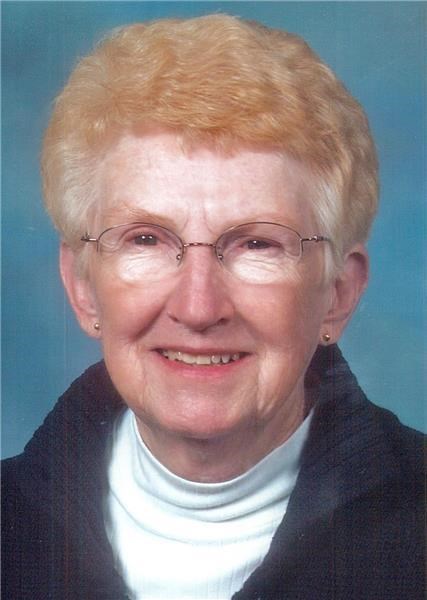 Mass of Christian burial is 10 a.m. today at St. Bernadette Catholic Church in Bellevue. Burial will be at Calvary Cemetery.

Bethany Funeral Home in La Vista is in charge of arrangements.

Mary Catherine (Murphy) McMahon was born June 20, 1930, in Council Bluffs, Iowa, to parents Joe and Ann Murphy. Mary and her sister, Rose Ann grew up in Perry, Iowa, until she moved to Omaha to attend St. Catherine's School of Nursing.

Mary Catherine married her husband, Jerry, on Sept. 17, 1950, at Holy Name Church. As Jerry went off to serve in the Korean War, Mary Catherine moved back to Perry to live with her mom and her sister. Soon after moving back, she discovered she was pregnant. It was while she was working at Kings Daughter Hospital in Perry, that she found out she'd be having twins, Mary Liz and little Jerry. Reunited with her husband, Mary and Jerry had five more children which they raised in Omaha where they were members of Holy Name Parish.

Mary Catherine and her family formed lasting friendships with the 45th Avenue gang and stayed in contact with the remaining members of the cherished group. The family of nine later moved south to Greene Avenue where they became members of St. Bernadette Parish. Mary Catherine lived there for almost 50 years before moving to Papillion Manor and then to Kearney to live with Kurt and Colleen.

Mary Catherine went back to school and earned her master's degree in 1983. Working as a nurse at Bergan Mercy Hospital brought her great joy in her 45-year career. Setting an example of service and compassion for her family, Mary Catherine won the Spirit of Mercy Award in 2001, which was a distinguished honor, that was repeated by her daughter Mary Liz in later years. After retiring from nursing, she later went back to volunteer as a receptionist in the surgery center at Bergan Mercy where she often was recognized by many doctors and fellow nurses who had known her from her long tenure there.

Mary's life was filled with faith, family and friends. From having Masses celebrated for others to doing countless loads of laundry for family or playing bunco with the ladies, Mary was always a source of strength and comfort for others. You would never find Mary Catherine in the spotlight, not just because she despised having her picture taken, but because she was always putting others first. She was a woman of few words, but the ones that were spoken, although gentle, were always straightforward and right to the point.

Mary Catherine loved being with her family whether it was traveling to see them, driving them to various appointments, visiting at big family dinners, or just riding along to the grocery store. Some of the best times with her were just sitting quietly on her back porch, not talking, but just enjoying her presence and the sounds of nature.

Her faith in God was a driving force in her life as she started and ended her days in prayer, right up until Jesus welcomed her home into his loving arms. Mary Catherine McMahon passed away on the afternoon of Nov. 16, 2020, surrounded by her loving family. The Mary circle is now complete.

She was preceded in death by her parents, Ann and Joe Murphy, her husband, Jerome John McMahon, her son Michael, her daughters Ann and Mary Liz and her granddaughter Mary Claire.

Daughter, sister, wife, mother, godmother, aunt, grandma, great-grandmother, friend, nurse and neighbor ... are just a few of the many roles played by Mary Catherine in the past 90 years.

To plant trees in memory, please visit our Sympathy Store.
Published by Kearney Hub from Nov. 20 to Nov. 21, 2020.
MEMORIAL EVENTS
Nov
19
Vigil
Bethany Funeral Home - La Vista
8201 Harrison St., La Vista, NE 68128
Nov
19
Visitation
5:00p.m. - 7:00p.m.
Bethany Funeral Home - La Vista
8201 Harrison St., La Vista, NE 68128
Nov
20
Mass of Christian Burial
10:00a.m.
St. Bernadette Catholic Church
7600 So. 42nd St, Bellevue, Nebraska
Funeral services provided by:
Bethany Funeral Home - La Vista
GUEST BOOK
6 Entries
I enjoyed working with Mary at Bergan Mercy Hospital. She was a nice lady. God Rest her soul
Gina Halbur
Coworker
November 22, 2020
I remember Mary as a hard working RN at Bergan Mercy 4South orthopedic nurse station where I was the floor pharmacy tech from 1990-1993 & assisted Dave Reisbig RP. She will be missed by her family and friends. God Rest her soul
Gina Halbur
November 22, 2020
Mrs. McMahon was a lovely, kind woman. A little bit feisty but mostly just sweet. She raised an amazing family; so many of you that I have come to know and love. I can only guess what the reunion was like in heaven. Oh the joy!! May God rest her dear soul and may He comfort you with the many happy memories you hold in your hearts.
Joyce Stranglen
November 21, 2020
Mary was indeed such a woman of few words but the ones she did share were exceedingly kind. When she left Papillion Manor, we were all happy that she would be amongst family, but heart broken to see her go. My heart is hurting for your family, I'm so sorry for your lost.
Cecilia Marek
November 20, 2020
I will always remember her as a gentle and fair boss as well as a kind person. Sorry for your loss.
dianne pavelka
November 19, 2020
Mary McMahon, one if the finest ladies I have ever met. The greatest grandmother any child could have dreamed of having. One of my greatest honors was knowing her. I look forward to seeing her in heaven. My heart goes out to her family. May Jesus bless and comfort you all at this time.
Russ Ward
November 19, 2020