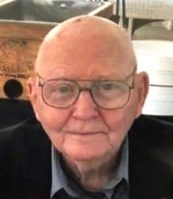 BORN
1934
DIED
2021
FUNERAL HOME
Larson-Nelson Funeral Home
1617 North Bridge Street
Yorkville, IL
Donald Gordon Walters
Born: July 3, 1934
Died: May 12, 2021
Donald Gordon Walters, 86 of Yorkville, IL, died May 12, 2021. Born on July 3, 1934, in Aurora, IL to Donald Grey and Margaret Mary (Halpin) Walters.
Don attended elementary school in Aurora until the family moved to a farm in Neillsville, WI, in the mid 1940's. Here, he learned to work hard on his family's fields and enjoyed working with the animals. He often reminisced about his time on the farm and never failed to remind his children about the long walk to his rural school while going uphill both ways! During his sophomore year, the family moved to Malta, IL, and Don graduated from Shabbona High School in 1952.
After graduation, Don worked at Equipto manufacturing plant in Aurora. He married his high school sweetheart, Gwen Thompson, in 1955. He was a PFC in the Army stationed in Anchorage, Alaska from 1957-1959. Don served as a firefighter during his time in the Army. He was the driver of a four man engine company. His family discovered later that he had been struck by lightning during training!
Upon discharge, he returned to Equipto and remained there for 44 years. Don valued time with his family above all else, and made sure to attend every sports game and school program for his kids. He enjoyed woodworking, volunteering for Meals On Wheels, Publishers Clearinghouse, and eating hot fudge sundaes. He was a deeply spiritual member of St. Patrick Catholic Church since 1968, serving as lector, usher, and eucharistic minister. He offered to hear confessions several times but was never taken up on the offer. He was a third degree knight in Knights of Columbus. He will be dearly missed.
Don was preceded in death by his sister, Mar Mae McBroom, brothers, James and Jack Walters, and his grandson, Emory Walters. Survivors include his wife Gwen, his children Steve (Lisa) Walters of Sugar Grove, Kim (Todd) Pierson of Oswego, Aimee (Rodger) Long of Oswego, Kellie Vanderlei of Yorkville, and Joshua Walters of Yorkville; his grandchildren, Katie (Tyler) Tourt of Sandwich, Morgan (Sammy) Gafford of Oswego, Leah and Brooke Pierson of Oswego, Chloe Vanderlei of Yorkville, and Julia, Mitchell, and Lucas Walters of Yorkville; his brother, Tom Walters of North Carolina; siblings-in-law Judy Jacobson of Sheridan, IL, Tom (Rita) Thompson of Rochelle, IL, and several nieces and nephews. In Don's own words "and so on and so forth."
The wake service, Friday, May 14 at Nelson Funeral Home, 1617 N. Bridge Street, Yorkville, starts with a saying of the rosary at 3:30 with the visitation following from 4pm-8pm. Funeral Mass will be at 10 am on Saturday, May 15 at St. Patrick Catholic Church, 406 Walnut Street, Yorkville with a luncheon following at Lakeview Grille, 604 W. Veterans Parkway, Yorkville.
Those who wish to remember Don in a special way may make gifts in his memory to the CFCA (Catholic Foundation for Children) or Childrens International.
Arrangements by Nelson Funeral Homes & Crematory, www.NelsonFuneralHomes.com or 630-553-7611.

Published by Kendall County Now from May 13 to May 20, 2021.
To plant trees in memory, please visit the Sympathy Store.
MEMORIAL EVENTS
May
14
Rosary
3:30p.m.
Larson-Nelson Funeral Home
1617 North Bridge Street, Yorkville, IL
May
14
Visitation
4:00p.m. - 8:00p.m.
Larson-Nelson Funeral Home
1617 North Bridge Street, Yorkville, IL
May
15
Funeral Mass
10:00a.m.
St. Patrick Catholic Church
406 Walnut Street, Yorkville, IL
Funeral services provided by:
Larson-Nelson Funeral Home
MAKE A DONATION
MEMORIES & CONDOLENCES
Sponsored by Larson-Nelson Funeral Home.
2 Entries
Wally, your Dad must have gone to the same school as mine did! I am sorry to hear of your loss my Brother. Peace to all of you. Love, C.D.
Christopher M Darling
May 15, 2021
Don was a faithful loving follower of Jesus and Mother Mary. He was an inspiration to many of us who witnessed his devotion to the teachings of our Catholic Church. May he be quickly welcomed into the heavenly realms. God bless his beautiful family as they mourn his loss.
Barb and Dennis Donnellan
May 14, 2021
Showing 1 - 2 of 2 results