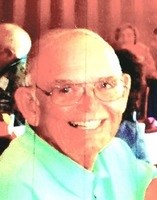 BORN
1934
DIED
2021
James E. Wilhelm
Born: March 1, 1934 in Sandwich, IL
Died: April 8, 2021 in Sandwich, IL
James (Jim) E. Wilhelm, 87, of Sandwich Illinois passed away at home with his family at his side on Thursday, April 8, 2021. Jim was born on March 1, 1934 in Sandwich Illinois to James P. and Dorothy E. Wilhelm. Jim was raised in the Sandwich area and graduated from Sandwich High School in 1953. After High School Jim entered the United States Air Force as a Communication Central Specialist. Once he was discharged from the Air Force, he returned to Sandwich to live. He then met his wife to be and the love of his life, Carol Hauri. They were married on August 16, 1958 and would live the rest of their lives in Sandwich.
Jim was proceeded by death by his Father, James P. Wilhelm and Dorothy E. (Browning). He is survived by his wife Carol (Hauri), son Jeff (Rhonda) Wilhelm (Sheridan, IL) and daughter Jackie Wilhelm (Sugar Grove, IL), granddaughters Christina (Chris Brown), Melissa Wilhelm and three grandsons, Aiden Brown, Bryson Brown and Cameron Brown "Big Jim" spent most of his career in the retail, bar and Hotel business. He purchased and Managed the Fairway Inn Tavern and Hotel in Sandwich Illinois in 1968. Jim sold the business in 1982 but continued to bartend at the Sandwich Moose Lodge until he retired. Jim enjoyed fishing, hunting, spending time at the cabin in Wisconsin, patronizing local businesses on the weekends and the Chicago Cubs and Bears.
A Celebration of life will be held for "Big Jim" on Sunday, May 2, 2021 from 2:00 pm to 5:00 pm at the Sandwich Moose Lodge #1016 located at 1002 East Church Street (Rt. 34). Please wear a piece of attire (hat, button, t-shirt) supporting Jim's hobbies. Hunting or fishing, camo., Chicago Cubs or Bears
Donations may be made directly to the following:
Meals on Wheels Senior Luncheon Program, DeKalb County or Sandwich VFW #1486, 713 South Main Sandwich, IL.