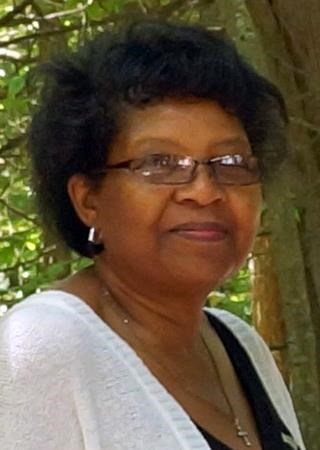 Charity Cooks, age 77, passed away on Saturday, July 17, 2021 at Aurora Hospital in Burlington, WI. She was born on July 10, 1944 in Macon, Mississippi to Levi and Rosie Spann. At the age of three, her family moved to Helena, AR where Charity remained until graduating high school. Upon graduation, Charity moved to Kenosha.

It was in Kenosha that she met Robert B. Cooks, and was united in marriage on June 21, 1963. Charity began art classes at technical school. After the birth of her sons, she became a full time homemaker until beginning a career at Sears in the cafe. Charity continued her education by earning a Clerical Certificate. She then transitioned to sales clerk at Sears eventually becoming a Customer Service Agent. Charity continued her career at Snap On where she eventually retired.

After retiring, Charity had time to spend on her many hobbies including painting, boating, fishing, gardening, and volunteering as a foster grandparent. She was a member of Coleman Chapel AME Church where she served on the Steward Board, Trustee Board, Missionary Society and sang in the choir. Charity loved her time at the Senior Center socializing, taking classes, and volunteering.

Charity and Robert were blessed with 45 years of marriage until his passing in 2008. They were also blessed with their three sons, Robert Cooks (Nellie Rivera), Richard (Kim) Cooks, and Ryan (Aimee) Cooks. Charity is also survived by her grandchildren, Britni Moses, Rebecca Cooks, Kyale Cooks, Janelle Cooks, Cassie Cooks, and Savannah Cooks; by her step-grandchildren, Garrett Olson and Nathan Olson, and by a great-grandchild Ava Simone Shirly.

Charity is survived by a myriad of nieces and nephews including Rita Conley, who she considered a daughter and her God-daughter, Alante Wallace. She was preceded in death by a step-grandson, Brandon Wilson.

The family would like to thank the paramedics and staff at Aurora Burlington Hospital who worked hard to keep Charity alive. Ultimately, it was Charity's time to meet her Creator.

Published by Kenosha News on Jul. 21, 2021.
To plant trees in memory, please visit our Sympathy Store.
MEMORIAL EVENTS
Jul
24
Visitation
10:00a.m. - 12:00p.m.
Piasecki Funeral Home
3720 39th Avenue, Kenosha, WI
Jul
24
Service
12:00p.m.
Piasecki Funeral Home
3720 39th Avenue, Kenosha, WI
Funeral services provided by:
Piasecki Funeral Home
MAKE A DONATION
MEMORIES & CONDOLENCES
2 Entries
Mrs. Cooks was a lovely women. I had spoken to her more than once at McDonald's on 30th ave while on my way to work. We often spoke about her son Robert in a hopeful way. Again, a lovely..lovely women... Ed DeLuisa
Edwin De Luisa
July 24, 2021
Sympathy to the family my friend will be truly missed God bless and take care . God will be with you at all times
Marva Dancy
Friend
July 24, 2021
Showing 1 - 2 of 2 results