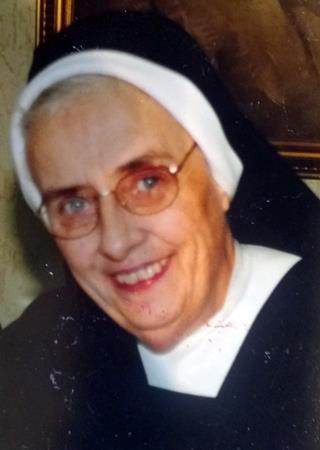 Sister Mary Petra, born as Frances Quintus in North Dakota to devout Catholic parents; she was the youngest of three children. Prior to entering Carmel DCJ, she worked as an accountant for a jewelry store in Iowa where her family had settled. This position would stand her in good stead throughout her life since she worked with figures in each of her assigned ministries for our Carmel DCJ.

Sister was older when she entered. Her six postulant companions referred to her as "mom" since she had reached the advanced age of thirty-one years! She had a deep voice and thus singing "on key" was difficult, but she had a unique faculty to truly enjoy other sisters' talents. She always had a ready smile and word of encouragement for their efforts in areas where she herself could not participate. Our Blessed Mother remained her great companion throughout her youth and religious life; thus evidenced in her choice of title. Sr. Mary Petra had a great devotion to her Rosary and promised her fellow novices that she would say "three" Hail Mary's for them all the days of her life. . . I followed up on this many times. . . and she really did! Her name "Peter" was chosen after her Father – but it proved to be a perfect fit for Sister. During the tumultuous years following Vatican II when consecrated life was challenged with radical twists, Sister Mary Petra, true to form, was a "Rock." She stood firm in her beliefs and fidelity to her Lord, as did St. Peter of old: "Lord, to whom shall we go?"

Sister served our congregation in our ministries with children and youth all her years in Carmel. She worked with our boys in Wauwatosa, served as superior and administrator in East Chicago for three years, returned to Wauwatosa to manage the boys – with a pause as Provincial Superior of the North Province. She then moved on to our boys in Hammond, and finally ended her apostolic service in her original home in Wauwatosa. Sister Mary Petra was devoted to the children and worked hand in hand with Sr. M. Regina to raise the status of our home from a group-level facility into a certified residential treatment center – thereby preserving it for many years from closure.

As she aged, Sr. Mary Petra suffered much from arthritic pain. She pulled through her surgeries very well, but age took its toll on both her mental and physical faculties. She accepted her transfer to Kenosha and became a much-loved resident by all the sisters and staff who cared for her. As her dementia deepened, she required total care, but this condition only caused her to be more loved. Sister was taken to holy Mass each day in her chair, and she amazingly was able to follow along, saying the prayers and receiving Our Lord in Holy Communion. Sister Anne Marie once mentioned that she would miss her greatly after her death. . . "I cannot imagine life around here without her!"

Sister was hospitalized on June 10th and was diagnosed with pneumonia and dehydration. She was treated and returned home on June 11, 2021. Sister Mary Emmanuel said that she was doing well and praying along with the sisters in her room. However, Our Lord had His own plans for her final transfer. On June 14, 2021, at 12:30 P.M., a staff from our Home was taking her blood pressure, when she suddenly opened her eyes briefly, and with no struggle, closed them again as she began her passage into the arms of Jesus and His Mother whom she served with fidelity for these past 54 years.

Thank you for your Holy Mass and prayers for our dear Sister Mary Petra.

To plant trees in memory, please visit our Sympathy Store.
Published by Kenosha News on Jun. 18, 2021.
MEMORIAL EVENTS
No memorial events are currently scheduled.
To offer your sympathy during this difficult time, you can now have memorial trees planted in a National Forest in memory of your loved one.
Funeral services provided by:
Piasecki Funeral Home
MAKE A DONATION
MEMORIES & CONDOLENCES
0 Entries
Be the first to post a memory or condolences.