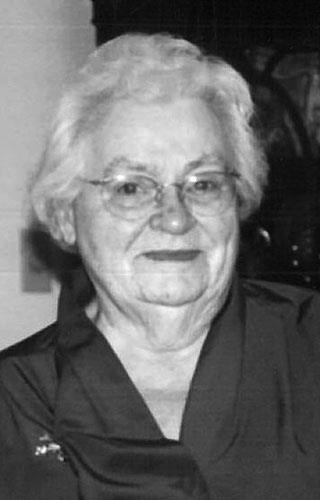 Born in Highland Park, IL on February 8, 1924, Regina was the daughter of the late John and Sophia (Zahnle) Klemp. She was a graduate of Highland Park High School.

On May 4, 1946 at Holy Cross Catholic Church in Deerfield, IL Regina was united in marriage to Frank Willems. Together they showed their four daughters the value of faith, personal integrity and hard work.

Regina was employed by Piggly Wiggly for over 30 years. Previously she worked for Northwestern Draperies and Kenosha Metal Products.

She was a member of the retired retail clerks' group, former choir member of St. Mark's for over 30 years and formally active in scouting, parish and school activities. Regina liked to cook, travel, fish and sew. She and Frank enjoyed many fishing trips and travel to National and State parks. Regina loved spending time with and cooking for family and friends.

In addition to her parents, Regina was preceded in death by her loving husband Frank; her daughter, Barbara Willems Severs; her great grandson, Jordon Kuzik and her brothers, John, Matthias, Earl and Richard Klemp.

Funeral services honoring the life of Regina were held privately. Interment was held in St. George Cemetery. In lieu of flowers, memorial remembrances to Our Lady of Mount Carmel Catholic Church, 1919 54th Street, Kenosha, WI 53140 or to Carmelite Sisters of the Divine Heart @ The Legacy at St. Josephs, 9244 29th Avenue, Kenosha, WI 53143 would be appreciated by the family.

Published by Kenosha News on Dec. 6, 2020.
To plant trees in memory, please visit the Sympathy Store.
MEMORIAL EVENTS
To offer your sympathy during this difficult time, you can now have memorial trees planted in a National Forest in memory of your loved one.
Funeral services provided by:
Piasecki Funeral Home
MAKE A DONATION
MEMORIES & CONDOLENCES
2 Entries
Patsy,Diana,Christine: This is Dave Klemp-Earl Klemp's oldest son and the cousin you have not seen in 30-40 years. First of all my heartfelt prayers and condolences go out to you! So,So sorry for your loss! This loss really hits hard since basically your Mom was the next to last living member of my father's (your Uncle Earl) immediate family. Although my memory is vague...I do remember Aunt Sis-Regina-Your Mom as being an amazing woman with the typical Klemp attributes-strong willed, adventurous, work hard, enjoy life, and take care of family! I also remember her as being a pretty good cook and baker bringing delicious treats to family picnics in the 1950's and 1960's at Grandpa and Grandma Klemps on Ridge road. You all were lucky to have her as a Mom. With deep regret I mourn her passing and again offer healing prayers and sympathy! God Bless!
David L Klemp
December 7, 2020
Hi Pat! I´m so sorry to hear about your Mom. I remember we would have some good laughs when she would drive us to/ from school. Nice memories!! She was fun! Please call or email me when you have time. 2627635001
Peggy Dosemagen
December 6, 2020
Showing 1 - 2 of 2 results