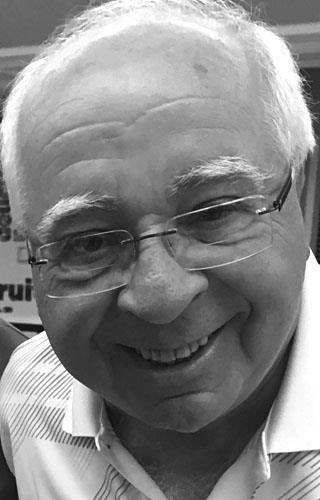 Roger Allen Andreoli, lifelong Kenosha resident and force of nature, died peacefully and prematurely after his battle with Covid-19 on November 28, 2020.

The son of the late Frank Andreoli and Divina (Fortino) Andreoli, Roger was born on July 28, 1942 into a large Italian family. He spent hours playing in Columbus Park with his siblings and neighbors and serving as an altar boy at Mount Carmel Catholic Church. He often recalled how the priests would walk over and come right into his house to pull him out of bed in the morning to help with services.

He attended Kenosha public schools and graduated from Mary D. Bradford High School. There he spent many happy hours in the symphonic band playing tuba, and in a dance band playing string bass. A proud member of the class of 1960, Roger spent the rest of his life actively working on the reunion committee.

Roger graduated from the University of Wisconsin-Whitewater with an education degree and began his professional career at Roosevelt Elementary teaching sixth grade. Throughout his life he shared countless stories of all the fun he had with his students, particularly his first class. He received his graduate degree in special education from Cardinal Stritch University while teaching full-time. While at Stritch, Roger began lifelong friendships with many of the brilliant sisters who were national leaders in education.

It was Roger's move to teaching special education that led him to meet his wife and best friend of 50 years, Sharon (Smith) Andreoli, a speech therapist employed by Kenosha Unified. When Sharon decided that she was going to make a change and accept a position in Los Angeles, California, Roger said, "No, you aren't. You are going to stay here and marry me!" They were married several months later on August 1, 1970.

Roger and Sharon had three children together. He had as much fun with them as with his students, always participating in and attending their activities. As a family, they loved to travel on road trips in their big van, attend sporting and musical events, and laugh as much as possible. Sharon and Roger could not have been a better parenting team and also supported each other professionally. Their daughter fondly remembers waking up on school mornings to find her parents sitting at the kitchen table, drinking coffee and talking through their upcoming days, discussing their students, and sharing ideas.

As wonderful of a father as Roger was, he was an even more amazing grandfather. His two granddaughters were the lights of his life.

Roger's professional life was one of service. He served others as a special education teacher, a Director of the Kenosha Achievement Center, the Director of the Kenosha County Comprehensive Mental Health Board, and the coach of more youth sports teams than can be counted. Roger liked to say, "We meet people where they are, with respect, and we help them take the next step they can." Dad ended his career at Wilmot High School. While there, he created a successful work program for his students, insuring that individuals with intellectual disabilities could establish careers with local businesses and enjoy the pride that comes with work and connection to others.

Roger's happy place was on the golf course. Roger and Sharon spent their retirement splitting time between Kenosha and The Villages, Florida, where he got plenty of opportunity to work on his short game. Roger met wonderful people in Florida and enjoyed all of its activities and sunshine. He also loved traveling and took many trips both nationally and internationally. He believed that one of the best ways to learn was to explore different places and to get to know people from different cultures.

Roger's exuberance for life was infectious. It would be impossible to list all of the organizations in which he participated; he jumped into living with both feet. He will be remembered for his terrific (and sometimes inappropriate) sense of humor, his goofy accents, his incredible handmade carpentry creations, and his catch phrases like, "If it's free, it's for me," "Don't buy that, I can make it," and "You ask for nothing, you get nothing!" His colorful fashion choices and his giant smile will be especially missed.

Roger is survived by his wife, Sharon; his children Kori (Mike) Lusignan, Allan (Julie) Andreoli, and Joseph (Melissa) Andreoli; his two beloved granddaughters, Ellerie Lusignan and Georgia Andreoli; his brother, Don Andreoli, his sister, Jean Smith, and his twin sister, Rosalyn Deardorf; dozens of devoted nieces and nephews; and his best friend in life, Lee Aiello. He was preceded in death by his parents and siblings Salvatore, Robert, Betty, Frank, and Albert.

Roger's family will not be holding services at this time in order to spare other families the trauma they experienced with Covid-19. When this pandemic is over, Roger's life will be celebrated in the way he loved living: with music, laughter, and food. Until then, please wear a mask, stay socially distanced, and take care of others.

Should you wish to honor Roger's life with a charitable donation, the Kenosha Achievement Center (KAC) was near and dear to his heart.

To plant trees in memory, please visit our Sympathy Store.
Published by Kenosha News on Dec. 3, 2020.
MEMORIAL EVENTS
No memorial events are currently scheduled.
To offer your sympathy during this difficult time, you can now have memorial trees planted in a National Forest in memory of your loved one.
GUEST BOOK
21 Entries
I never had the opportunity to meet Roger, but after my father (his Bradford '60 classmate) Donald Neau passed in April 2020, Roger shared some fond memories of their time in various Bradford bands together which was of great comfort to me. I wish I'd had the chance to meet him in person, but I'm grateful for the kindness he shared towards me with his recollections, and I hope the Andreoli family takes comfort in their wonderful memories with him. My sincerest condolences to you all.
Victoria Neau
January 1, 2021
While I never met Roger, I do know his beautiful daughter Kori, and through her, I feel I know a bit of him. She has shared many stories of both her youth and the present, of him helping her perfectly outfit a closet storage system, sharing great food, and laughs. Keep making him proud Kori -- proud to call you a friend & colleague.
Ben Brooks
December 15, 2020
Great man! Love and sympathy to his wonderful family!
Kathy McNamara Conmey
December 5, 2020
I worked for Roger when he was the Director at the Dept of Community Programs. He was an excellent boss to work for. And yes, he made me laugh all the time. It was my pleasure to have known him.
Michael Giese
December 4, 2020
My sincere condolences to Sharon and the Andreoli family. Roger's was a familiar face at music events in the Kenosha schools for years, and I doubt that as a proud father he ever missed a concert at Tremper H.S.during the years when Kori was one of the the school's outstanding young musicians. Music was certainly a large part of Roger's life and was a value he passed on to the family. I'm sure those shared musical experiences will be the source of treasured memories for his family for years to come. Please accept my deepest sympathy.
Larry Simons
December 4, 2020
You have my sincere deepest sympathy. He was such a great guy and one of the best Andreoli boys. He will be missed by all that knew him. What a wonderful obituary One of the best that I have ever read. By it showing what a man he was. God bless you Roger!
Robert Pozza
December 4, 2020
My deepest Sympathy. Such a great loss to your family and the Kenosha community. Roger was a great asset to everyone he came in contact with. Many fond memories. RIP Roger, from one Columbus Park Alum to another.
Bob Oldani
December 4, 2020
A NY Times writer shared Mr. Andreoli's obituary on Twitter today and I wanted to say though I did not know him or the family, he was someone whose path I wish crossed mine when I lived in SE WI. My sympathy to his family and "bravo" for a life well-lived.
C. Engelmann
December 4, 2020 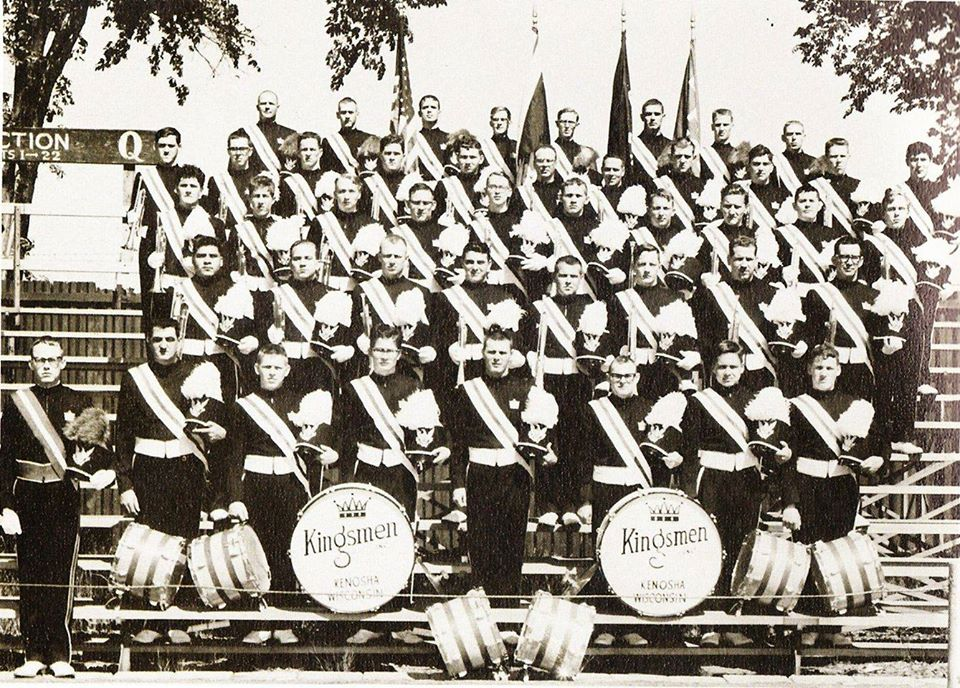 Roger was a good musician. We marched in the Kingsmen. Always had a joke to tell.
Lou Rugani
December 4, 2020
It was with great sadness that I read the news of Roger´s passing. The obituary captured his beautiful zest for life and his love for family and people. I am sending my sincere sympathy and prayers for comfort and peace in the days ahead for Sharon and family.
Royanne Cruthers-Moon
December 4, 2020
We are very sorry to hear about Roger´s passing. We remember all the Andreoli gatherings and Roger was always fun to be with. He will be missed by all of us. Bob and Mary Ann
Bob and Mary Ann Broesch
December 3, 2020
Sending love to Joe and the Andreoli family. So sorry to hear this news.
Paul Bothe
December 3, 2020
Roger was a best friend since High School and always a pleasure to catch up with at reunions. We shared many wonderful memories as members of the MDBHS Band. So sad to hear he was a victim of this terrible viris. Prayers to his wife and family for comfort at their tragic loss. Roger will be joining our other band members in heaven performing wonderful concerts. My dad had been the principal at Columbus Elementary for many years but think he had gone to administration before Roger started teaching there but feel he was a student there when Dad was there. RIP Roger, you will be missed my many.
Jerry Fenske
December 3, 2020
I offer my sincere condolences over the loss of your husband/father/grandfather, Roger Andreoli. Although, I didn't know him personally, I am originally from Kenosha, and I do know one of his nieces, Barbara. I do know how generous and wonderful is the entire Andreoli family! It is truly a family who lives to serve! Roger did a wonderful job educating the children of Kenosha, and serving his community as Director of the Kenosha Achievement Center! The entire community is experiencing this loss, but none more painfully than his own family. Now, you all must take comfort in your memories with him. With sincere sympathy! Susan Johnson
Susan Johnson
December 3, 2020
Sharon, I was saddened to read the news of Roger's passing. My thoughts and prayers are with you and your family.
Marcie McDevitt
December 3, 2020
I am so sorry to hear of Mr Andreoli's passing. I am honored to have been his student and have always considered him to be the most influential to me. Kaye Kronholm Roosevelt class of 1965
Kaye Kronholm Weis
December 3, 2020
Sharon, I am so very sorry about Roger's passing. My thoughts and prayers are with you and your family.
Karen Christensen
December 3, 2020
Our thoughts and prayers are with you guys. Every memory I have of your dad- from the soccer fields to lakeside players- is one where he´s making me laugh.
Gabriel Llanas
December 3, 2020
We are so sorry to hear of Rogers passing I´m shocked because I was fortunate enough to speak to him as I was coming up the hill and he was leaving his home We chatted for a while I am blessed to have been able to do this Again so sorry, we will miss his smile
Mike and Anna Downey
December 3, 2020
Almighty GOD, welcome Roger into you heavenly kingdom. A friend and Columbus Park playmate. Gene Ruffalo Tucson, AZ
Gene Ruffalo
December 3, 2020
Iknow how hard it is to lose a loved one. My thoughts andprayers are with you.
Richard KruseI
December 3, 2020