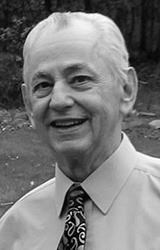 Born on August 27, 1937, in Kenosha, Wisconsin, he was the son of John and Bessie (nee Paasch) Condrad Sr. He grew up in Burlington, where he graduated from Burlington High School in 1955. Roger was united in marriage to LaVonne Bartelson on March 27, 1971 in Burlington. Following marriage, they resided in Southeastern Wisconsin and the suburbs of St. Paul, Minnesota.

Roger followed in the family landscaping business, and was the owner of Condrad Landscaping. He was a member of St. John's Evangelical Lutheran Church in Burlington. He volunteered at the Waterford Library doing landscaping for the last 5 years and had a life-long passion for gardening, planting and feeding the birds.

In lieu of flowers, memorial contributions may be made to Waterford Public Library.

He will be laid to rest at Burlington Cemetery.

To plant trees in memory, please visit our Sympathy Store.
Published by Kenosha News on Jan. 12, 2021.
MEMORIAL EVENTS
No memorial events are currently scheduled.
To offer your sympathy during this difficult time, you can now have memorial trees planted in a National Forest in memory of your loved one.
Funeral services provided by:
Schuette-Daniels Funeral Home & Browns Lake Crematory
GUEST BOOK
1 Entry
Please accept our deepest sympathy on Roger´s passing. He was a sweet, gentle soul. We will miss seeing him doing his gardening. I told him your yard was "the showplace" of the neighborhood.
Ron & Jan Carlson
January 14, 2021