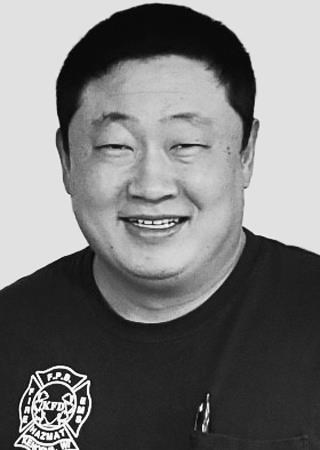 KENOSHA / MADISON - Samuel T. Wenger passed away at his home on April 25, 2021, at the age of 39 years. Sam was born near Seoul, South Korea, and on his sixth birthday he was left at the orphanage of the Eastern Child Welfare Society by his widowed mother who could not afford to care for him. Six months later, he was adopted by the family of his loving mother, Diana; father, Bill; and brother, John. We first saw him at O'Hare International Airport in Chicago and his adventure began. He passed through the Middleton school system as a good student, athlete and friend to his classmates. Tirelessly fishing whenever and wherever he could, his smile was always warming to whomever he encountered. After high school he enlisted in the U.S. Marine Corps and served for six years on active and reserve duty. During the later four years of that time, he attended the University of Wisconsin-Whitewater and graduated with honors in Safety. He then joined the Kenosha Fire Department, where he made many good friends and served admirably.

The family has chosen to have a private service at this time. A memorial service will be held at a later date. For online condolences visit www.gundersonfh.com

To plant trees in memory, please visit our Sympathy Store.
Published by Kenosha News on May 2, 2021.
MEMORIAL EVENTS
No memorial events are currently scheduled.
To offer your sympathy during this difficult time, you can now have memorial trees planted in a National Forest in memory of your loved one.
Funeral services provided by:
Gunderson Funeral Home - Madison
MEMORIES & CONDOLENCES
1 Entry
I only knew Sam a short time. He was a fellow Marine and Firefighter. We were together at the IAFF COE. I'm very sorry for your loss. He was nice to me when I needed it most.
William R Henry
May 3, 2021