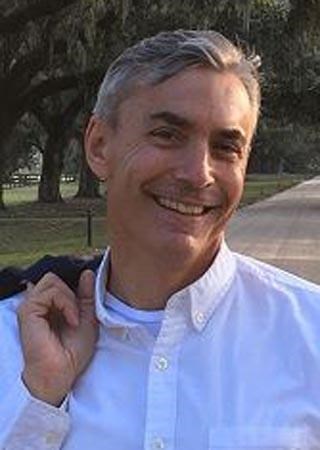 KENOSHA - Steve passed away unexpectedly in Charleston S.C. on May 24, 2021 after a valiant 5 year battle with Mantle Cell Lymphoma.

He was born in Kenosha, WI, the first child of Jackson Neil and Catherine Ellen (Angelo) Ludke on January 23, 1959. He was born long before SNL meant (Saturday Night Live).

He and his younger sister Amy were raised in Kenosha with both sets of grandparents and many aunts, uncles, and cousins. He attended public schools, the First Methodist Sunday Schools, (MYF) Youth Fellowship, many church camps, and was confirmed in the church.

In 1975 his father's job took the family to Richmond, IN. He graduated from Richmond High School in 1977, then attended Indiana University Bloomington graduating in 1981 with a BS degree in Transportation and Utilities.

He started his sales career in Houston, TX in the shipping industry, moved to United Airlines in Atlanta during which he traveled extensively throughout the U.S. and the world. He then switched to the moving industry and to Executive Sales with AT&T and Century Link before he became ill.

He was very energetic and enjoyed running, hiking, swimming, tennis, skiing, Ping Pong (especially vs his sister), and online chess. He easily made each stranger a new friend, he had a big heart and a positive outlook. He had an adventurous spirit, a positive outlook, and a great love for family and friends, many who stepped in to help with their time, travel, love, and prayers during his cancer battle. The family cannot thank everyone enough, it was a tremendous effort. We hope you all know who you are and what you meant to Steve and to us.

His faith was an extremely important part of his life, and he appreciated the love and continued support of Pastor Susan Leonard and the church members of the Bethel United Methodist Church, Charleston, S.C.

Steve was preceded in death by cousins: Harold Lubecke and Joan Sandall; and his beloved dog Bo Thai.

Steve will be dearly missed but his unwavering faith in God continues to bring comfort to his loved ones. Rest now, your fight is over.

Memorial services will be held in several locations at a later date.

Even during his illness Steve continued to contribute to saving our environment and supporting our democracy. Memorial contributions to Greenpeace, United to Protect Democracy, or World Wildlife Fund would be appreciated, and the world will be a better place for it.

Published by Kenosha News on Jun. 6, 2021.
To plant trees in memory, please visit the Sympathy Store.
MEMORIAL EVENTS
To offer your sympathy during this difficult time, you can now have memorial trees planted in a National Forest in memory of your loved one.
MAKE A DONATION
MEMORIES & CONDOLENCES
1 Entry
Mr. & Mrs Ludke,
I hope you remember me. I’m Mike your old postal carrier. I am very sorry to read about your sons passing. My heart felt sympathy goes out to you & your family.
Michael Markley
Friend
June 6, 2021
Showing 1 - 1 of 1 results