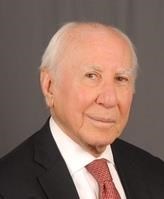 BORN
1935
DIED
2021
FUNERAL HOME
Lakes Funeral Home
203 North Dogwood Dr
Berea, KY
Dr. Abed Harim Rifai
January 12, 1935 - October 10, 2021
Berea, Kentucky - Abed ("Abdul") Harim Rifai passed away of natural causes at his home on October 10, 2021. "Ab" was born January 12, 1935, in Baalbek, Lebanon, the son of Rifai al-Rifai and Fahmiyah al Sukkar. He attended the The American University of Beirut (A.B., 1958), Indiana University (M.A., 1960) and The American University (Ph.D., 1966), where he met the love of his life, Lucretia ("Maggie") Davenport, whom he subsequently married.
They came to Berea in 1966, at the invitation of President Francis Hutchins, who desired Ab to build the political science curriculum in what was at the time the Department of History and Political Science. This he did so well that, by the early 1980s, the Department of Political Science became a separate entity, and remains, by his example, committed to excellence in teaching and scholarship, and to the Great Commitments of Berea College.
He was deeply committed to the Kentucky Political Science Association, serving as its president in 1986, and encouraged it on its way to becoming one of the most active and innovative state associations in the discipline. As part of that effort, he induced the KPSA to encourage undergraduate students to present their research, something almost unheard of at the time. The effort was so successful that, by 1990, the Abdul H. Rifai Award for Best Undergraduate Paper was established. Nothing delighted him more than the fact that more than a dozen of his own students won that award. In 2008, the KPSA designated him as a "Distinguished Political Scientist," one of only fifteen in the history of the organization.
Ab remained at Berea College for half a century, inspiring, cajoling and comforting countless students and colleagues, with wisdom, wit and elan. Before he retired in 2016, he completed one last revision to his cherished "Lexicon of International Politics" (https://tinyurl.com/yvfswhr4), which he had worked on over the years with many students. He will be greatly missed.
He was preceded in death by Maggie, and is survived by beloved nieces, great-nieces and a great-nephew, all in Lebanon, and by innumerable friends, students and peers.
Due to COVID restrictions, the funeral will be a private one, and his interment will return him to Maggie in Alabama. A public celebration of Ab's life will be planned once restrictions are sufficiently lifted.

Published by Lexington Herald-Leader on Oct. 22, 2021.
To plant trees in memory, please visit the Sympathy Store.
MEMORIAL EVENTS
To offer your sympathy during this difficult time, you can now have memorial trees planted in a National Forest in memory of your loved one.
Funeral services provided by:
Lakes Funeral Home
MAKE A DONATION
MEMORIES & CONDOLENCES
Sponsored by Lexington Herald-Leader.
3 Entries
I am still a cynic. You were an excellent teacher. Rest easy.
Sarah Firebaugh
December 29, 2021
I met Mr. Rifai through and agency and I took care of his wife and after her passing I stayed on to take care of him and his house. I could never have found such a remarkable man and friend if I tried. He gave new meaning to what a friend is. I will miss him so much! Rest high on the mountain my good friend.
Mary Richardson
Friend
November 1, 2021
RIP my friend..I always enjoyed our conversations over 15 yrs about politics, and local news while I cut your hair. Take your rest Dr. Rifai.
Jane Yates
October 22, 2021
Showing 1 - 3 of 3 results