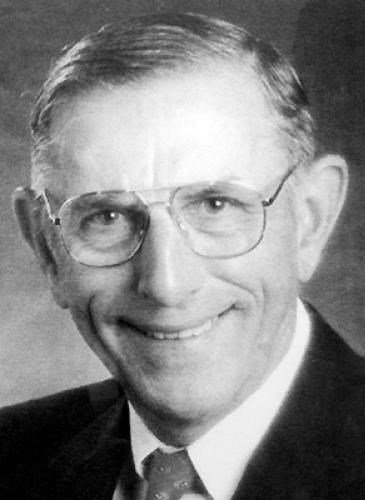 BORN
1929
DIED
2017
FUNERAL HOME
Milward Funeral Directors
159 North Broadway
Lexington, KY
STEVENS David Bruce, M.D., 87, of Lexington, passed away suddenly of natural causes Feb 6, 2017, at his home. Born July 11, 1929, in Louisville, son of Albert Clyde and Sue Schan Stevens. He was predeceased in 2014 by his college sweetheart and wife of 61 years, Sally Ann Symon Stevens. Raised in Louisville, he fell in love with golf, a lifelong passion, and worked as a caddy. One of his favorite stories was how he shagged balls for a not yet famous Army sergeant, named Ben Hogan. After graduating from Louisville Male High School, he worked his way through DePauw University, where he was a member of Sigma Nu fraternity. Sally and Dave were married shortly after college, and moved to Chicago to complete his medical school training at Northwestern School of Medicine. They then moved to Ann Arbor, where he completed a residency in orthopaedic surgery at the University of Michigan. In 1960, they moved to Lexington, and never left. He enjoyed a 20-year private practice career in orthopaedic surgery, seeing patients at St. Joseph, Central Baptist, and Good Samaritan hospitals. He was then appointed Chief of Staff at the Lexington Shriners Hospital, where he practiced for the next 20 years, and joined the faculty at the University of Kentucky College of Medicine. He was very active in organized medicine at the local, state, and national levels. He had a passion for the medical care of patients young and old, and was respected and loved by people from all aspects of healthcare. He was held in high regard for his genuine interest and concern for all those with whom he came in contact. He was an amateur pilot, and logged thousands of miles in his beloved Cessna, "7439-er Tango", often with Sally as his companion on his flights. He was a creative athlete, and in the winter could be spotted jogging the golf course while he carried four clubs, playing a game he nicknamed "rolf". He also loved to sail, and spent many happy summers with family and friends on Lake Charlevoix in Michigan. He was a civic leader, and was known for his ability to build consensus and negotiate compromise to improve the Lexington community. In 1974, he served on the committee that crafted the Fayette County merger with the city of Lexington, to form the Lexington-Fayette Urban County Government. He also championed the successful indoor smoking ban for Lexington in 2003, at a time when smoking bans in Kentucky were a radical concept. He had a kind and gentle spirit, and was always generous with his time and talents. Sally and Dave widely practiced philanthropy, which included the establishment of endowed scholarships at DePauw University, Northwestern School of Medicine, and the University of Kentucky College Of Medicine. He never stopped giving back. He is survived by his two children, Dr. Scott (Julia) Stevens of Lexington, and Patty Stevens (Samuel) Ardery of Bloomington, IN, and his brother Donald (Wendy) Stevens of Camarillo, CA, and sister, Alice Sparks of Ft. Mitchell, KY. He was blessed with 7 grandchildren: Carolyn (Ian) Duggan of Newport News, VA; Rachel (Ben) Iler of Indianapolis, IN; Laura Stevens of Woods Hole, MA; Grace Ardery of Chicago, IL; Sarah (Michael) Berro of Durham, NC; Mary Ardery of Asheville, NC; and David Lane Stevens of Lexington/New Haven, CT. He was also blessed with one great grandchild, Lane Jerome Duggan of Newport News, VA. He was predeceased by his brother, Michael Stevens, and his cherished grand nephew, Joseph Alexander Zdolshek. He is survived by nephews and nieces and their spouses and children, including John Sparks, Sally (Dale) Zdolshek, Dana Zdolshek, Isabella Zdolshek, Adam (Elizabeth) Stevens, Thomas (Dhana) Stevens, Cameron Stevens, Kyra Stevens, and Brenda Stevens. He is also survived by multiple other special relatives and friends, including but by no means limited to, Bruce and Katy Estes, Bill (Kay) Symon, Kelly (Jeff) Martin, Juanita Warner, Steven (Susan) Caller, Joe (Fayetta) Singleton, and by Sally and Dave's last dog, Annie. If he could speak to us now, he would say: "Live by the Golden Rule, and never give up". Visitation this Fri, Feb 10, 2017, 4-7pm, Milward-Broadway with Masonic Services at 6:30pm conducted by Lexington Lodge #1 F&AM. Visitation this Sat, Feb 11, 2017, 10am, Crestwood Christian Church, followed by a funeral service at 11am. Reception to follow. In lieu of flowers, please consider memorial donations to Shriners Hospital, 1900 Richmond Rd, Lexington, 40502; or the Lexington Rotary Club Endowment Fund, 401 West Main St, Suite 305, Lexington, 40507; or the charity of your choice. www.milwardfuneral.com
Published by Lexington Herald-Leader on Feb. 9, 2017.
To plant trees in memory, please visit the Sympathy Store.
MEMORIAL EVENTS
Feb
10
Visitation
4:00p.m. - 7:00p.m.
Milward Funeral Directors
159 North Broadway, Lexington, KY
Feb
10
Service
6:30p.m.
Milward Funeral Directors
159 North Broadway, Lexington, KY
Feb
11
Visitation
10:00a.m.
Crestwood Christian Church
KY
Feb
11
Funeral service
11:00a.m.
Crestwood Christian Church
KY
Funeral services provided by:
Milward Funeral Directors
MAKE A DONATION
Please consider a donation as requested by the family.
MEMORIES & CONDOLENCES
Sponsored by Lexington Herald-Leader.
4 Entries
I am very sorry to hear about your loss. He had a very funny sense of humor at Shriners and was such a nice man!
December 2, 2017
I trained at the University of Kentucky in the Division of Orthopedics and Dr. Stevens was one of my favorite attending physicians. My wife, a UK nursing graduate, and I both spent time at the Shriner's Hospital and he enhanced our learning experience immensely. I flew with him to Crippled Children's Clinics in West Virginia and went on to get a pilot's license myself and fly regularly to this day. As an athlete myself, I most enjoyed his competitive nature and playing "rolf" with him at Idle Hour. He always managed to beat me!!!
Leo Ludwig
February 26, 2017
David was so generous with many valuable contributions to our community.

Sally and David loved the house that I built and they enhanced.

It was a joy to have known them.Please
accept my sincere contolencces.
Doris Shouse Nemore
February 10, 2017
I worked with Dr. Stevens at St. Joseph Hospital in the early 60s. He was a wonderful man.
Then after I married I had a child who was crippled and Dr. was the one at Shriner's who got him braces.
Son's life expectancy was 9 yrs. He is now 48! Thanks Dr. Stevens!
Missy McGurk Doyle-Simminger
February 10, 2017
Showing 1 - 4 of 4 results