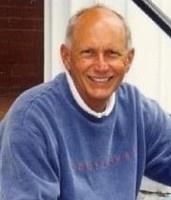 BORN
1947
DIED
2021
UPCOMING SERVICE
Celebration of Life
Dec, 1 2021
The Club at Spindletop Hall
Send Flowers
Jack Hughson Ballard II
August 16, 1947 - November 15, 2021
Lexington, Kentucky - Jack Hughson Ballard, II formerly of Lexington, KY, passed away peacefully on November 15, at his home in Cincinnati, OH. He was born in Barbourville, KY August 16, 1947, the son of the late Jack Hughson Ballard, Sr and Marylee (nee Dixon) Ballard.
Jack attended school in Barbourville until his high school graduation when he went to the University of Kentucky College of Architecture. Upon his graduation from UK he went to work at CMW Architects and Engineers, where he had held internships for several years before. He continued to work at CMW throughout his career, eventually making partner and then president of the company. By the time of his retirement in 2019, he had been at CMW for fifty years.
Some of the notable Lexington landmarks that he designed and worked on are The Kentucky Horse Park, the Chapel at the First Presbyterian Church, Gainsborough Farm, The Fayette County Jail, St. Joseph Hospital - East Woman's Center, The Gill Heart Institute at the UK Medical Center, and The Charles T. Wethington Building at UK, designed in association with Robert A.M. Stern architects of New York.
He served on several professional boards and committees. He was president of the Kentucky Chapter of the American Institute of Architects. He was an active member of the National Council of Architectural Registration Boards in Washington, DC. He served on the LFUCG Board of Architectural Review, and Kentucky Registration Board.
Jack was involved with many organizations in Lexington. He was long time president of the Lexington Shakespeare Festival, the Club at Spindletop Hall, and the South Hill Neighborhood Association.
He is survived by his sister, Marsha Beth Ballard of Lexington, KY, and his spouse Robert C. Magrish of Cincinnati, OH.
A memorial service will be held on December 1, 2021, at 11:00am at the Mount Horeb Presbyterian Church (2793 Iron Works Pike. Lexington, KY 40511). A reception celebrating his life will follow the service at The Club at Spindletop Hall (3414 Iron Works Pike, Lexington, KY 40511)
Memorial contributions in his honor may be made to the University of Kentucky, College of Design, or The Spindletop Hall Restoration Fund.
Online condolences may be made at www.springgrove.org

Published by Lexington Herald-Leader on Nov. 26, 2021.
To plant trees in memory, please visit the Sympathy Store.
MEMORIAL EVENTS
Dec
1
Celebration of Life
The Club at Spindletop Hall
3414 Iron Works Pike, Lexington, KY
Dec
1
Memorial service
11:00a.m.
Mount Horeb Presbyterian Church
2793 Iron Works Pike, Lexington, KY
MAKE A DONATION
MEMORIES & CONDOLENCES
Sponsored by Lexington Herald-Leader.
2 Entries
Hello to all of the Ballard family. My sincere condolences for your loss. Jack was a great business person, friend and humanitarian. He will be missed tremendously. Thank you, Bill Demarcus President/ CEO Bluegrass Office Systems, INC
Bill Demarcus
November 29, 2021
I was Jack's neighbor at Griffin Gate. I really liked Jack and hated to see him leave Griffin Gate. I also attended Mt Horeb Presbyterian Church with him and missed seeing him there as well. I am so sorry to hear of his passing.
Teresa Branham
November 29, 2021
Showing 1 - 2 of 2 results