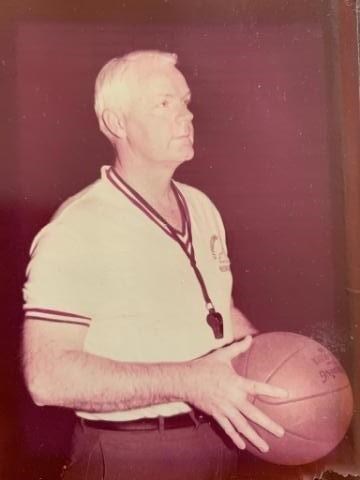 BORN
1926
DIED
2020
ABOUT
Bourbon County High SchoolBryan Station High SchoolScott County High School
FUNERAL HOME
Tucker, Yocum, & Wilson Funeral Home
320 West Main Street
Georgetown, KY
John Robert (Bobby) Barlow – 2-26-1926 to 4-19-2020 Bobby was born in Akron, Ohio to John Henry and Grace Daniels Lancaster who preceded him in death. He was, also, preceded in death by his brothers, Charles T. Barlow and James L. Barlow. Bobby grew up in Georgetown, KY, where he graduated from Garth High School. He started his working career when in early elementary due to his father’s passing. Upon graduating high school, he volunteered to serve in the Navy during World War II in the Pacific Ocean off the coast of Japan. Upon returning from the war, he returned to receive his masters from Georgetown College. He was a member of the Pi Kappa Alpha fraternity. During his college years, he coached the 5th – 8th grade boys in basketball and girls high basketball teams for Garth School. In 1972, he received the Georgetown College Alumni Achievement Award. He implemented the parks and recreations in Georgetown. Including starting the public playground, Little League, Pony League and Church Softball Leagues during this time. He ran the Suffoletta Public Swimming Pool for its first 9 years. He taught Mathematics, Physical Education and Driver’s Education for over 30 years at Great Crossings, Oxford, Scott County High School, Bourbon County High School and Bryan Station High School in Lexington. He was Athletic Director, Principal and coach of all sports at Nicholas County High School. During his coaching career, we won 528 out of 740 games as head coach. He won 12 district, 5 regional, 3 Louisville Invitation Tournaments, 4 Fayette County Tournaments and 1 Ashland Tournament. He took his teams to the Kentucky State Basketball Tournament 5 times, got to the quarter finals 3 times and semi-finals once. During his last year of coaching, his team was ranked 4th in the nation. He was voted Coach of the Year in the state of Kentucky three times. After retiring from the school systems, he worked as a Superintendent for Barlow Homes. He retired in his late 80’s. Bobby attended Georgetown Baptist Church several times a week. He taught Sunday school and served as a deacon since his 20’s. He loved the Lord with all of his being. He lived a life of service to God. He was married to Joy Carol Lewis, a teacher in the Scott County and Bourbon County school systems for 66 years. He had two children, Dr Robb (Karen) Barlow of Shelbyville, Indiana and Laurel Marie Barlow of Georgetown Kentucky and Chandler, Arizona. He had eight grandchildren, Christen (Chase) Allen, Robbyn (Cody) Everette, Lance (Tori) Fortney, Adam (Allie) Barlow, Kari (Jordan) Justice, Emily Fortney, Tessa Lingol and Stephanie Lingol. He had 12 great-grandchildren. We will be holding a Celebration of Life service later in the year when it is safe for everyone to participate. In lieu of flowers, please, send donations to the Amen House of Georgetown; 319 E Main Street, Suite 8; Georgetown, KY 40324. Tucker, Yocum, & Wilson Funeral Home is in charge of arrangements.
Published by Lexington Herald-Leader on Apr. 24, 2020.
To plant trees in memory, please visit the Sympathy Store.
MEMORIAL EVENTS
To offer your sympathy during this difficult time, you can now have memorial trees planted in a National Forest in memory of your loved one.
Funeral services provided by:
Tucker, Yocum, & Wilson Funeral Home
MAKE A DONATION
MEMORIES & CONDOLENCES
Sponsored by Lexington Herald-Leader.
0 Entries
Be the first to post a memory or condolences.