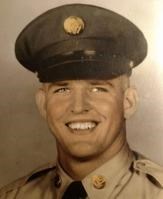 BORN
1939
DIED
2021
John Corder Greene
July 14, 1939 - June 27, 2021
Georgetown, Kentucky - John Corder Greene, devoted and beloved husband of Joie (nee Bettye Jo Guthrie) passed away at his home in Georgetown, KY Sunday, June 27th. He was born in Somerset, KY July 14, 1939 to the late Wanda Corder and John C. "Charlie" Greene; and grew up in Richmond, KY.
His athletic prowess showed early and he played all sports in the former Madison-Model athletic program during the mid-fifties. Excelling in football, he won many awards; was named to both conference and all-state teams. He was recruited by several colleges before choosing Indiana University. After the school's Big Ten suspension in 1957, John left gridiron glory days behind and transferred to U.K.
He then had a brief though successful stint selling new Edsels at Cronin Ford in Cincinnati before Uncle Sam came calling his draft number. He volunteered for three years ("best thing I ever did"). After basic training, he qualified for further schooling, becoming a cryptographer, assigned to (then) Army Security Agency in Frankfort, Germany with Top Secret clearance throughout the Cold War. He was on duty at the height of Russian aggression when the Berlin Wall was erected in 1961. He was honorably discharged the following year; then alerted to "standby" during the October Cuban Missile Crisis.
John returned home and enrolled at now Eastern KY University to finish his business/marketing degrees, thereby meeting his soulmate, Joie. They married August 16, 1963.
Following graduation, he joined Ashland Oil and Refining Company as a buyer in the purchasing department, before managing corporate relocations. He was named Director of Human Resources for Ashland Chemical in Columbus, OH. Has last assignment was as Director of Executive Meetings and Events within Community Relations. This was a varied and stimulating position from board meetings around the country, the KY Derby and the 1996 Summer Olympics in Atlanta for the entire event. He served as a consultant following retirement in 1998.
John was active in various civic, national and professional organizations. He served as member, president and chairman of the board for E.R.C. in Washington, D.C., a world-wide organization focusing on relocation needs of employees, major companies and realtor services.
John was an ordained PCUSA deacon and elder, serving on church boards in Ashland, KY, Columbus, OH and at Second Presbyterian, Lexington, KY.
He was instrumental in starting an A.S.A. Frankfurt group which has held reunions since 2001 in various cities and abroad. The bonds shared Army buddies have grown tighter years after proud service to their country.
John was a member of B.S.F. for 8 years; worked hard to blend Great Banquet members at Second with 'Walk to Emmaus' community. He was a faithful Friday morning Brother of a Fourth Day men's prayer group each Friday morning before joining the Lunch Bunch (an Ashland retiree group).
The Greenes' favorite place to relax and enjoy special occasions with family and friends was The Greenbrier in White Sulphur Springs, WV. They traveled by boat, train or plane throughout the U.S., Alaska, Canada, the Caribbean, Europe, Australia, New Zealand and East Africa.
He was a good man, kind to all with a strong love and commitment to family. He is remembered best to his dear son, John Guthrie Greene (Shelly Stahl Greene) as Dad; while as Grandad to William Charlton Greene with whom he shared memory-making fun times in the company of "Chip," the "best grand-dog ever."
John and Joie loved sharing their Mallard Point lake home where he was always ready for patio dining, boat cruises and fishing.
Also surviving are brothers, Jerry and David Greene of Richmond; cousins, Jo Brown Leone of Lexington and Andrea Woltersdorf of Battleground, WA; and Joie's extended family with whom he had close ties.
There will be a Celebration of Life on August 14th, 11:00 a.m. at Second Presbyterian Church, 460 E. Main, Lexington.
Donations may be made in his memory to his church (https://www.2preslex.org/), the ALS Association, KY Chapter (http://webky.alsa.org/site/PageServer/?pagename=KY_homepage) or the charity of your choice.
www.milwardfuneral.com

Published by Lexington Herald-Leader on Jul. 4, 2021.
To plant trees in memory, please visit the Sympathy Store.
MEMORIAL EVENTS
Aug
14
Celebration of Life
11:00a.m.
Second Presbyterian Church
460 E. Main, Lexington, KY
MAKE A DONATION
Please consider a donation as requested by the family.
MEMORIES & CONDOLENCES
Sponsored by Lexington Herald-Leader.
3 Entries
John & Jo have been Friends since the "60,s" There are no better people that I have had in my life Will miss John with all my heart, RIP my friend, will miss our laughs Love you "
Marilyn Frick
Friend
July 4, 2021
John was a good man and a good friend. My condolences.
Bob Mueller
July 4, 2021
Joie, I remember John from knowing him at Ashland but my best memories were the times we sat together at the Ashland Retirees Christmas Luncheon in 2017, 2018 and 2019. Those were more relaxed times to talk and share memories. So sorry to hear this sad news. He was so respected by everyone.
Linda Elam
Work
July 1, 2021
Showing 1 - 3 of 3 results