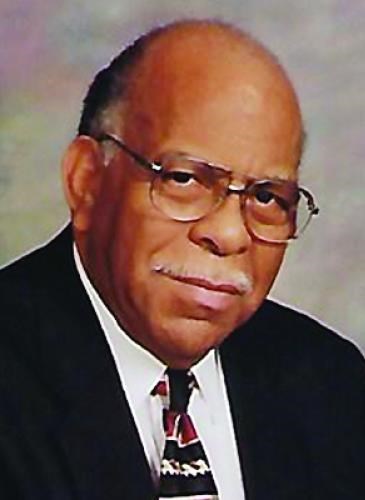 FUNERAL HOME
Fender Funeral Directors
1593 Russell Cave Rd.
Lexington, KY
JOHNSON John H. Jr., 88 father of Norma J. Johnson, and Dr. Eric C. Johnson (Karen) died Sat, April 8, 2017 at Kentucky One Saint Joseph Hospital after a brief illness. He was the son of the late John H. Johnson Sr. and Hattie Ingram Johnson. John graduated from Paul Lawrence Dunbar High School where he played football and did well academically. He retired from the Fayette County Police Department after 29 years of service. He was a lifelong and faithful member and trustee of Consolidated Baptist Church. He was preceded in death by his son James R. "JJ" Johnson, one grandson Antonio Jackson, two brothers James and Arather Johnson, two sisters Corine Darneal and Hattie Brinson. He leaves to cherish his memory his children, 3 grandsons, 3 granddaughters, 1 great-great grandson, 2 great-grandaughters and a host of nieces and nephews. Visitation Thurs Apr 13, 2017 from 6-8pm and Fri Apr 14, 2017 from 12pm-1pm with the funeral immediately following all at Consolidated Baptist Church. The family can be reached at 859-299-6711 or 859-619-8197. Arrangements Fender Funeral Directors.
To plant trees in memory, please visit our Sympathy Store.
Published by Lexington Herald-Leader on Apr. 13, 2017.
MEMORIAL EVENTS
Apr
13
Visitation
6:00p.m. - 8:00p.m.
Consolidated Baptist Church
, KY
Apr
14
Visitation
12:00p.m. - 1:00p.m.
Fender Funeral Directors
1593 Russell Cave Rd., Lexington, KY
Apr
14
Funeral
1:00p.m.
Consolidated Baptist Church
, KY
Funeral services provided by:
Fender Funeral Directors
MEMORIES & CONDOLENCES
Sponsored by Lexington Herald-Leader.
6 Entries
Pastor Johnson, sorry for the loss of your dad. Prayers to you and the family.
Ronald Claybourne
April 14, 2017
Prayers to the family as you go through this difficult moment. However be mindful that there is no more pain,suffering, or stumbling blocks, nothing but joy and peace for your father/brother/uncle/grandpa. God Bless
Alicia Doran
April 14, 2017
Narma and Eric I am very sorry for the loss of your father.
Dale Bumpase
April 13, 2017
Our prayers go out to you and your family in this time of bereavement . Just know that he is in a better place and God will get you through these difficult times.

Love Janet and ALYCIA and family
Janet Gordon
April 13, 2017
As the days and weeks pass, and as you return to life's routine, may you continue to feel comforted by the love and support of family and friends.
Frankie, Valorie Turner
April 13, 2017
Eric, Norma & Family,
I want to express my deepest sympathy to you all. May God's peace and comfort be with you during this difficult time.
Ruthie Beckham
April 13, 2017
Showing 1 - 6 of 6 results