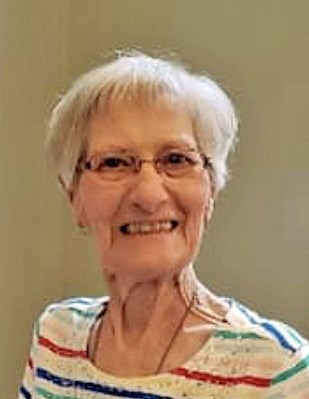 Ann graduated as Valedictorian from Moreland High School in 1954. She married her best forever friend and love, Chuck Clark, in 1956 and enjoyed almost 50 years of marriage before his death in 2006. A piece of her heart died that day too and she missed him every day for the past fifteen years.

Ann and Chuck lived in seven cities when their family was young, leaving the flat plains of Kansas in 1966 and eventually settling for good along the shores of Lake Michigan in Kewaunee. Ann made friends easily and hugged freely, welcomed people into her home, and brought sunshine and laughter wherever she went. Many people who knew Ann will remember her amazing sewing skills and beautiful flower gardens. Ann enjoyed countless hours as a volunteer at Holy Rosary Parish and the Kewaunee Clothes Closet.

One brother, Tony (Sarah) Herman, and one sister, Freda (Jim) Myers, also mourn her death. Ann remained close to her siblings despite the distance between Kansas and Wisconsin. When Ann joined the Clark family, she was embraced by nine new siblings, including surviving in-laws Marles Miller, Shirley Hilburn, Billye Yowell, Patty (Verlan) Covalt, and John (Carol) Clark. She was aunt to 60 nieces and nephews.

The family would like to thank the neighbors who helped Ann when she lived alone in her house, especially Joanie, Lisa and John, Teal, and Ann. Thank you to the staff at Emerald Bay Retirement Community and Memory Care who have treated her like family these past three years. Thanks to her Unity Hospice Team (Tara, Lori, Jessica and Kang) for their tenderness and compassion during the past five months.

Visitation will be at Holy Rosary Church, Kewaunee, on Saturday, April 24 from 10:00 a.m. until the funeral service at 11:00 a.m. Please visit www.holyrosarykewaunee.com for live streaming of the service. Buchanan Funeral Home is assisting the family and expressions of sympathy may be sent to their website www.buchananfh.com. Memorials may be made to Unity Hospice or the charity of your choice.

Please observe Covid protocols if you choose to attend the funeral service. We appreciate your prayers and sympathies and respect your decisions as you mourn Ann's death in-person or in the safety of your home.