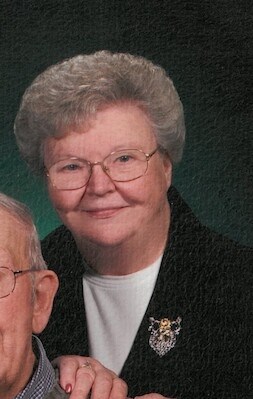 De Pere - Phyllis M. Benz, 83, formerly from Luxemburg, died Saturday afternoon, April 24, 2021, after a short battle with acute leukemia. She was born in Green Bay on September 1, 1937 to the late Richard and Helen (Powell) Garot. On May 20, 1967, she married Ronald J. Benz at Annunciation Church in Green Bay. She met Ronald when they both worked at Spence McCord Drug Company. He preceded her in death on December 20, 2017.

She served on the Luxemburg-Casco School District Board from 1975 to 1983. She served on the Kewaunee County Board of Supervisors from 2008-2010. She was involved with the Brown County Chapter of the American Business Women's Association, the League of Women Voters and was active in the Kewaunee County Democratic Party. She served as president of the Christian Mothers of St. Mary Church in Luxemburg. She enjoyed playing bingo, following the Packers, visits to the casino and spending time with her many friends and family, especially her grandchildren.

Phyllis was preceded in death by her husband Ronald, her parents; two sisters in law, Audrey Benz and Jean Jossart; two brothers in law, Kenneth Schuldes and Al Mathu; one nephew David Schuldes; and one niece Meredith Verrier.

A special thank you is extended by the Benz Family in appreciation and support provided to them by Unity Hospice and Woodside Manor Assisted Living in Green Bay.

Published by Kewaunee County Star-News from Apr. 25 to May 1, 2021.
To plant trees in memory, please visit the Sympathy Store.
MEMORIAL EVENTS
May
1
Calling hours
9:00a.m. - 10:45a.m.
St. Mary Church
Luxemburg, WI
May
1
Funeral
11:00a.m.
St. Mary Church
Luxemburg, WI
Funeral services provided by:
Mc Mahon Funeral Home - Luxemburg
MAKE A DONATION
MEMORIES & CONDOLENCES
Sponsored by Mc Mahon Funeral Home - Luxemburg.
6 Entries
My deepest condolences to Richard and the entire Benz family. I remember Phyllis always having a very positive, caring, and active presence at St. Mary's. May she rest in peace.
Lance Du Chateau
May 7, 2021
Phyllis and I worked together at Jones Transfer for several years. She was
Good friend. I just talked with Her on the phone and we talked of surprising the guys at Jones with pizza, but couldn't make it happen. I will miss her chats on the phone. I just found out about her passing 5 minutes before her funeral. I will have a mass said for her here in my own church, I will surely miss you, my old friend. My sincere condolences to her children and grandchildren.
Jeanne Maricque
Coworker
May 1, 2021
My deepest sympathy. We knew Phyllis when the Garots moved to our neighborhood. Phyllis actually became a part of our family--she spent many hours with us...great friends. She was so special in so many ways. She had such a loving spirit and spent time with Jeannette as the years went on. Her love and knowing just what would be appropriate meant she was there when needed...even seemed to know when that was necessary. She was one of those special persons that nothing was too much if it meant caring and reaching out. We loved her and will always remember her. May her sweet soul now know the Peace she deserves.
S. Marilyn Peot, Steve Peot and Jeannette Schaut.
Friend
May 1, 2021
One of the best friends I ever had. Was the big sister I never had. We laughed all the time. Phyllis was the glue that kept the group together. I'm so lucky to have met her. I will miss her forever.
Marilyn Stephens
Friend
April 29, 2021
Old friend...would like to talk to daughter....please call...1-715-759-5398 ...cannot attend funeral...live up north....Amberg, Wi....
Sue Collins
Friend
April 28, 2021
Janet, Nancy & Richard,
My deepest sympathy to you and your families for your loss. Sending thoughts, hugs, and prayers of strength to get through this difficult time. Your mother was a blessing to many.
Take care!
Kim (Kulis) Nimmer
Neighbor
April 28, 2021
Showing 1 - 6 of 6 results