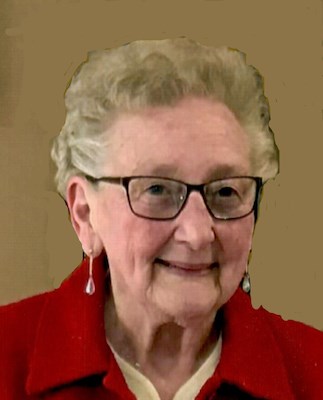 Rita graduated from the Washington Grace School and stayed on the farm to help her parents. Later the family bought a different farm in the Town of Lincoln area. When she was a few years older she worked at Bultman's Bar outside of Algoma for a few years.

She met and married Fred Clark on May 25, 1946 at St. Odile Church in Thiry Daems. They moved to Ellison Bay for two years, then moved to Algoma where she worked at the Algoma Hospital and later at the Algoma Hardwoods where she retired from in 1988.

Rita enjoyed the time she spent with all of her family, enjoyed baking, sewing and crocheting. She was a member of the American Legion Auxiliary and the Hospital Auxiliary.

Family and friends may gather at St. Mary Catholic Church, Algoma, Friday, June 18th, 2021 from 9:00 AM until the Mass of Christian Burial at 11:00 AM with Rev. Tony Birdsall officiating. Entombment at the Shrine of the Good Shepherd Mausoleum.

The SCHINDERLE FUNERAL HOME, Algoma, was entrusted with the arrangements.

Express your sympathy, memories and pictures on Rita's tribute page at www.schinderle.com