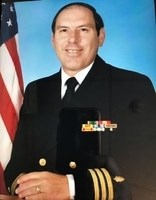 Seattle - Dr. Dennis Marvin Gilmore, DO, Captain USN, Ret passed away April 10, 2021 at Harborview Medical Center, Seattle. While covid protocols prohibited visits, he was supported by and was appreciative of the world-class medical environment and staff.

Dennis was born January 29, 1943 in Detroit to father Marvin Gilmore and mother Theresa Szymanski. His brother Gordon also preceded him in death. He is survived by his wife Marianne Stillings Gilmore, step daughters Rebecca Turpin and Katie Allaire, first spouse Susan Boyce O'Toole and their son Michael Gilmore, as well as numerous nephews, nieces, cousins and their families. He leaves behind innumerable former patients whom he served as their physician-a role he cherished.

Following his retirement from active duty, Dennis joined the medical staff of Group Health Permanente, Silverdale, caring for patients until a final retirement in 2002. While Dennis could no longer participate in sports himself, he found joy thereafter in donating his time, reading historical works, and avidly following his Michigan State Spartans and the Seattle Seahawks. He is and will be missed.


Published by Kitsap Sun from May 11 to May 12, 2021.
To plant trees in memory, please visit the Sympathy Store.
MEMORIAL EVENTS
To offer your sympathy during this difficult time, you can now have memorial trees planted in a National Forest in memory of your loved one.
MAKE A DONATION
MEMORIES & CONDOLENCES
2 Entries
We only knew each other a short time Denny and I´m saddened that the opportunity to get to know you better has been lost. You made my cousin very happy. You are reunited with your family and the many pups you held in your sweet care. God speed.
Denise Hutson
Family
November 14, 2021
Thank you for your service to our country, and the wonderful care you have given to your patients.
Mark DeSantis, DO
Acquaintance
May 27, 2021
Showing 1 - 2 of 2 results