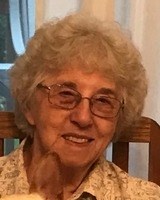 Elizabeth M. (Schantz) Pearce went home to the Lord, Dec. 9, 2020 after a long battle with Alzheimer's and Cancer. She was born May 8, 1932 to Gabriel and Rose Schantz, the seventh of nine children. She was raised on their wheat and dairy farm in North Dakota until the age of 16 when they sold it; they moved to Seattle, where she graduated from Franklin High School. In 1952 she met her future husband and the love of her life, David R. Pearce, S-Sgt US Army. A year later she followed him to Ft Richardson, Alaska and they married December 12, 1953. Three years later they were blessed with the first of five children, Diane (Steve Jennings), followed by Sandra (Glen Reite, deceased) Linda (deceased; Jim Steffen), Susan (Robert Corcell) and David M. (Kristen).

She loved taking cruises to Alaska, Tahiti and the Caribbean with family and friends. Their first Alaskan cruise in 1998 was to celebrate their 45th wedding anniversary. By pure chance she was able to walk down the aisle of the small chapel where they were married a week before it was torn down and replaced. She enjoyed selling real estate, and all the people she met and helped along the way. She enjoyed large family gatherings, trips to Reno, Vegas or just a weekend away. She was especially fond of their beautiful Benson Lake summer home that husband David built for her on the land they bought as a bare lot in 1955. Elizabeth was a lifelong Catholic, and a member of Holy Trinity Parish, Bremerton, since its founding. She was active in the St. Bernadette Guild and taught catechism for several years. In the community, she taught 4H sewing, played baseball, and cheered her children and grandchildren on in sports. Elizabeth loved life, her family and friends. She is so terribly missed.

In addition to her husband and children, Elizabeth leaves behind 11 beloved grandchildren, 4 great grandchildren, her sister Alvina Ballinger of Bremerton, numerous nieces and nephews, and Chico, her favorite chihuahua. A private funeral was held at Holy Trinity Parish on December 21. It is available for viewing at www.htcbremerton.org. If COVID restrictions allow, a celebration of life is planned for the spring of 2021 on her birthday. See her tribute at the Miller Woodlawn Funeral Home website.


Published by Kitsap Sun from Dec. 19, 2020 to Jan. 8, 2021.
To plant trees in memory, please visit the Sympathy Store.
MEMORIAL EVENTS
To offer your sympathy during this difficult time, you can now have memorial trees planted in a National Forest in memory of your loved one.
Funeral services provided by:
Miller-Woodlawn Funeral Home
MAKE A DONATION
MEMORIES & CONDOLENCES
Sponsored by Miller-Woodlawn Funeral Home.
0 Entries
Be the first to post a memory or condolences.