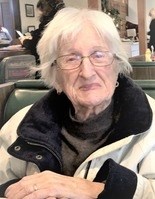 She is now at home with the love of her life, husband Joe Stark, who died four years ago. They were married 64 years.

She was also preceded in death by her parents, Yugoslavian immigrants Anna and John Vucina, and brothers John and Mike Vucina. She is survived by her son and daughter-in-law Chuck and Colleen Stark; grandson Spencer Stark and his wife, Abby, and granddaughters Elliot and Lucille.

Katie and Joe met at the Rainbow Café in Monterey, CA, where she worked as a waitress. Joe was stationed at the Naval Air Station. Katie and Joe devoted their life to helping family, friends, neighbors and people in need. They moved to Bremerton in 1966.

Katie was born in Monterey on Dec. 21, 1924, and learned the necessity of being resourceful while growing up in the Great Depression. She went without luxuries of any kind as a kid and later in life she rarely bought anything for herself, preferring to dote on her husband, son and grandson. She called herself "a stubborn Yugoslav," and wasn't shy about saying what was on her mind. Charles Barkley was among her favorite athletes.

She was a long-time member of the Altar Society at Star of the Sea Catholic Church in Bremerton, worked in the food bank at St. Vincent's and taught Sunday school for a while.

Katie was in her element in her kitchen. She made custard for people who were sick, fed Chuck's high-school friends hamburgers and homemade pizza, made clam chowder for the neighbors across the street, and kept eggnog on hand for the 3-year-old next-door neighbor. She produced countless Christmas breads during the holidays, pink-frosted sugar cookies for Valentine's Day and popcorn balls for Halloween. If you were in her favor, you'd get a call before your birthday, asking what kind of cake you'd like. "January is my busiest month," she once said. "I have 17 cakes to make."

In recent years, even as her short-term memory failed, she could still remember every vivid detail of her life's journey. She continued to entertain us with her captivating stories.

Because of her dementia, she lost her love of cooking the last few years. We are comforted knowing Katie will once again be making fried oysters for Joe.

(Because of COVID, a private mass will be held at Star of the Sea on December 10. She will be interred next to her husband at Tahoma National Cemetery in Kent.)


To plant trees in memory, please visit our Sympathy Store.
Published by Kitsap Sun from Dec. 3 to Dec. 5, 2020.
MEMORIAL EVENTS
Dec
10
Funeral Mass
Star of the Sea (Private Se4rvice)
MEMORIES & CONDOLENCES
1 Entry
I’m so grateful I had the privilege of meeting Katie. She was a spirited lady whose love for her family was obvious. She will be long remembered by those who knew and loved her. Prayers for comfort to her family.
Jean M. Brazell
Friend
December 6, 2020