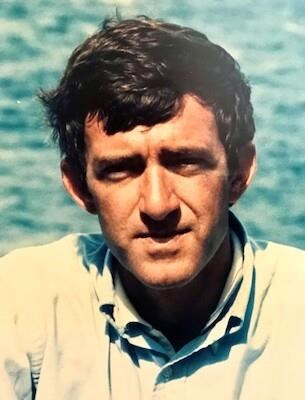 Knoxville - George Cranwell "Cran" Montgomery, who died June 14 at age 76, built a career in foreign policy while never losing hold of his East Tennessee roots. The son of Knoxville lawyer, George D. Montgomery and Mary Elizabeth "Mary Beth" Cranwell Montgomery of Pikeville, TN, "Cran" graduated from the Webb School of Knoxville, class of 1962. After graduating from the University of Virginia in 1966, "Cran" was commissioned as an ensign and spent the next six years as an active duty officer in the United States Navy. As a young officer in Vietnam, "Cran" excelled at working with Vietnamese liaisons in joint efforts to intercept arms shipments from the North Vietnamese. This early experience in diplomacy set the stage for a career focused on international relations. Gifted with high intelligence, a quiet temperament and a skill for listening, foreign policy was a natural fit. After graduating from Vanderbilt Law School in 1975, "Cran" and his first wife, Sally Hogeboom, moved to Washington, DC and welcomed their daughter, Erynn Elizabeth. "Cran" joined the staff of Senator Howard Baker as a foreign policy advisor, and began developing a focus on the Middle East. While working in the Senate "Cran" made deep ties with individuals of both his own party and across the aisle. He respected anyone who approached issues with intellectual honesty and rigor even when they did not agree. In 1985, "Cran" was appointed to be US Ambassador to Oman, a position he held for four years. While in Oman, he met Carol Lanfear, a British artist living and working there. The two married in 1991 in her home town of Sedbergh, in the Yorkshire Dales of England. In 1989, "Cran" returned to Washington, DC and joined Baker Donelson to practice inter-national law. He was a member of the Council on Foreign Relations, and served on the boards of the Georgetown School of Foreign Service and the Howard H. Baker Center for Public Policy at the University of Tennessee. In 1994 he retired from the Navy Reserve with the rank of Captain. Throughout his personal life and all phases of his career, words mattered to "Cran" Montgomery. He absorbed them in copious amounts of books, newspapers, magazines and word puzzles. He used them with conscientious care, speaking and writing with a style that was drily humorous and self-effacing. He had the remarkable skill of being able to say exactly what he meant without excess. His future son-in-law once observed that "Cran" possessed "that heavy quiet that com-mands," borrowing a line from the author John le Carré. However, the often quiet exterior belied a charm and humor that could put people at ease. In the early 2000s, 'Cran" and Carol returned to East Tennessee, making their home in Concord. After years of working in Washington and traveling abroad, he had never lost his love for Tennessee and the desire to return. This afforded them more time with family and friends. "Cran" was able to work on his tennis game, and spend endless hours on his boat, Morning Watch. Cruelly, several years ago, dementia began to rob him of those things he loved most. Besides his many friends scattered near and far across the globe, "Cran" leaves behind his beloved family: his wife, Carol Lanfear Montgomery; his daughter and son-in-law, Mr. and Mrs. Thomas M. Scollard; and granddaughter, Mary Elizabeth "Mary Beth" Scollard. A memorial is being planned for the end of the summer. In lieu of flowers, please send donations in memory of "Cran" to Ducks Unlimited (www.ducks.org) or the Navy-Marine Corps Relief Society (www.nmcrs.org). Arrangements by Rose Funeral and Cremation - Mann. Online condolences may be made at www.rosefuneraltn.com. The ferry is waiting, and you're late. Your family and friends love you and will wave and blow kisses to you from the shore. Someday we will join you on the other side. Enjoy the ferry ride. The ferryman tells great stories.


Published by Knoxville News Sentinel from Jun. 16 to Jun. 20, 2021.
To plant trees in memory, please visit the Sympathy Store.
MEMORIAL EVENTS
To offer your sympathy during this difficult time, you can now have memorial trees planted in a National Forest in memory of your loved one.
Funeral services provided by:
Rose Funeral & Cremation - Mann
MAKE A DONATION
MEMORIES & CONDOLENCES
Sponsored by Rose Funeral & Cremation - Mann.
3 Entries
Following 1956 graduation, I went to work as a legal secretary for Donelson, Montgomery, and Kennerly and knew Cran as a student. A perfect gentleman, more like his grandfather, Frank, than his mischievous father, Geroge. So sad about the disease that ended his life, but every day until that time was filled with family and his many and varied professions. He was truly a credit to all of us, from Tennessee and elsewhere.
Carole Whited (Mrs. Jack)
Friend
June 21, 2021
I had the honor and privilege of caring for Cran for the last three years. He was special, one of a kind, a true gentleman, even though this horrible disease was taking him it never took his spirit. He was loved by so many of us and will be so greatly missed.
Diane M Nelson
Friend
June 18, 2021
Cran was like an uncle to me. I was so luck to have met him while working as a caregiver. He was sweet and overprotective of me. From what little time me had together I always tried to put a smile on his face. We would dance a little and make each other laugh. I'm really going to miss him.
LeAnndra Smith
Friend
June 17, 2021
Showing 1 - 3 of 3 results