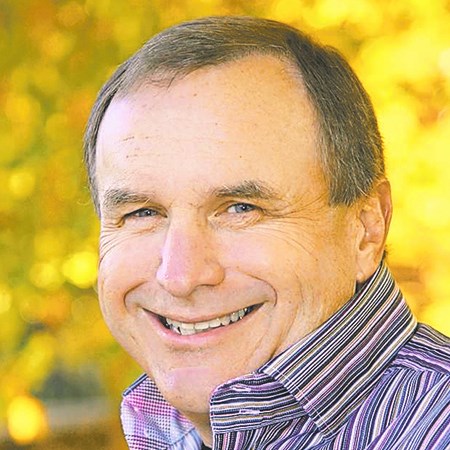 Jeff Jacoby, a local sports announcer and radio personality, passed away Christmas Morning at his home in Knoxville after a long bout with cancer. He was 61. Jeff was born in Toledo, Ohio and later relocated with his parents to Cincinnati, Ohio where he graduated from Finneytown High School. Jeff received a scholarship to play football for the Golden Eagles of Tennessee Tech University in Cookeville, Tennessee where he played inside linebacker from 1973 to 1976 and helped the Eagles win the Ohio Valley Conference Championship in 1975. He graduated in 1977 with a double major in English/Journalism. Jeff's love of football and sports of all kind followed into his professional life. After college Jeff hosted "The Golden Eagle Football Review" and did play-by-play for Tennessee Tech football and basketball including the Eaglettes. He started his career with WHUB-Radio in Cookeville as a play-by-play announcer and advertising representative. He became a sports announcer for WCTE-TV and wrote "SportsTalk" for the Herald-Citizen in Cookeville.

Jeff moved to Knoxville in the early 80's to become an account executive at WMYU Radio and kicked off his Knoxville sports career in 1983. He was a fixture on the Knoxville airwaves and known to Knoxville sports fans for 34 years. He joined the Vol Network in 1985. Before leaving WMYU and WWST radio stations in 1998, Jeff worked as the station's General Sales Manager then Vice President and General Manager and was elected to the Journal Broadcast Group Board of Directors. In January 2000, Jeff joined the Dick Broadcasting Group (now Cumulus Media), parent company of stations WIVK, WOKI and WNML as Morning Sports Reporter and Account Executive. In 2005, the SportsAnimal went on air and Jeff kicked off the new station as a co-host in AM drive which became the now famous "Doc, Jeff and Heather Show". Over the years, Jeff received numerous sales awards and recognition, culminating in his most treasured honor - The "Bobby Denton Employee of the Year Award," a coveted honor awarded by his peers. Jeff was a 2005 inductee of the Finneytown Hall of Fame. Jeff's greatest passion, besides his beloved family, was his love for making memories through his devotion to photography and videography. Many hearts of gratitude – too many to name – have poured out sentiments to his family for his enormous photographic contribution and generosity to sports fanatics, spirit squads, and families across the country.

Jeff is survived by his wife of 27 years, Sheree Lay Jacoby; mother, Nina Jacoby; brother, Doug Jacoby; daughters, Angie Jacoby Merrick (Jim) and Kristi Kromer Fisher (Ted); sons, Brad Jacoby and Chase Kromer; grandsons, Hunter and Jake Merrick; and granddaughters, Lydia, Isabelle, and Julianna Fisher; as well as many nieces and nephews. Jeff was predeceased by his beloved father, George Jacoby, an Ohio State Buckeye Co-Captain in the mid1950s, who inspired Jeff's love for football. That inspiration carried Jeff to Tennessee Tech and on to his love for both Ohio State and UT sports for decades.

The celebration of life service will be held Thursday, December 29, 2016 at 5:00 p.m., at Cokesbury United Methodist Church in the main sanctuary, 9908 Kingston Pike, Knoxville. In lieu of flowers, the family requests donations be given to "Game On Against Cancer", c/o Thompson Cancer Survival Center Foundation, 1915 White Avenue, Knoxville, Tennessee 37916. Philanthropic by nature, Jeff was an integral part in making the annual "Game On Against Cancer" event a success for the last 5 years. It was a cause very close to his heart before he was diagnosed. Click Funeral Home and Cremations 9020 Middlebrook Pike is serving the Jacoby family. www.clickfh.com

Published by Knoxville News Sentinel on Dec. 27, 2016.
To plant trees in memory, please visit the Sympathy Store.
MEMORIAL EVENTS
Dec
29
Celebration of Life
5:00p.m.
Cokesbury United Methodist Church
9908 Kingston Pike, Knoxville, TN
Funeral services provided by:
Click Funeral Home & Cremations
MAKE A DONATION
MEMORIES & CONDOLENCES
Sponsored by Click Funeral Home & Cremations.
21 Entries
Thank you Jeff Jacoby
Jason Kendall
February 14, 2017
My condolences, I just learned. I loved Jeff's graceful and insightful presence on sports radio in the morning.
Matthew Jordan
January 11, 2017
Met Jeff a couple of times at UT baseball games and was honored he took his photo with me. Such a great guy and sadly missed.
Judi Peffley
January 6, 2017
R.I.P. Jeff. Will miss you lots.
Jon Ferguson
January 3, 2017
While I haven't seen Jeff Jacoby since we both graduated from Finneytown High School in Cincinnati in 1973, I was able follow his life on Facebook and the people he touched over the years.

Jeff certainly battled his terrible disease with courage and grace and taught us all how to live life, touch people with his kindness and respect and leave memories we will never forget.

Jeff's family and friends should live in comfort knowing that his memory will always be there and will overcome the sadness of losing a loved one.

I know Jeff will continue to live on through his family and all who continue to hold such fond memories of his life. He certainly touched mine.
Mike Walsh
December 30, 2016
I know Jeff is truly home and celebrating, as he looks down on his family!! Will keep all of you in thoughts and prayers!!
Brad Bishop
December 30, 2016
Sheree & family my condolences are with you. Jeff was an all-around great guy! No matter what the circumstance, always a smile and a great attitude.
Much love at a difficult time!
Mickey
(Radiation Therapist)
Michelle Huddleston
December 30, 2016
My thoughts and prayers are with Sheree and the entire Jacoby family during this difficult time. I will always remember meeting Jeff and hearing stories about his love for football and family. I feel very blessed to have known such a wonderful man. Rest In Peace Jeff!
Laura Yarberry
December 29, 2016
Sheree and Family, I know today was "Jeff's Day." We here in MN had our hearts with you. I am glad we had the time we did in November to sit with Jeff, go through the Cruise Album together, to know that electric blanket was keeping him comfortable. Through your daughter we met a very inspiring person. The lives he touched seemed to mushroom from all of the comments read. May your memories shine upon you and bless you in the days to come. Hug those Grand Daughters for me. Gail and Al
December 29, 2016
I am truly sorry to learn of Jeff's passing. I feel very fortunate and grateful to have known him for over 50 years, from our first Communion together at Faith Lutheran Church, through our years at Finneytown HS playing sports, to our HS reunions and periodic visits down through the years. He was always bigger than life (and if you met him at the line of scrimmage it hurt!) although was as personable and altruistic a person I have ever known. God Bless Sheree and the entire Jacoby family. I pray they take comfort in knowing Jeff touched so many people during his life and made them all better for it. Rest in peace my friend.
Steve Olsen
December 29, 2016 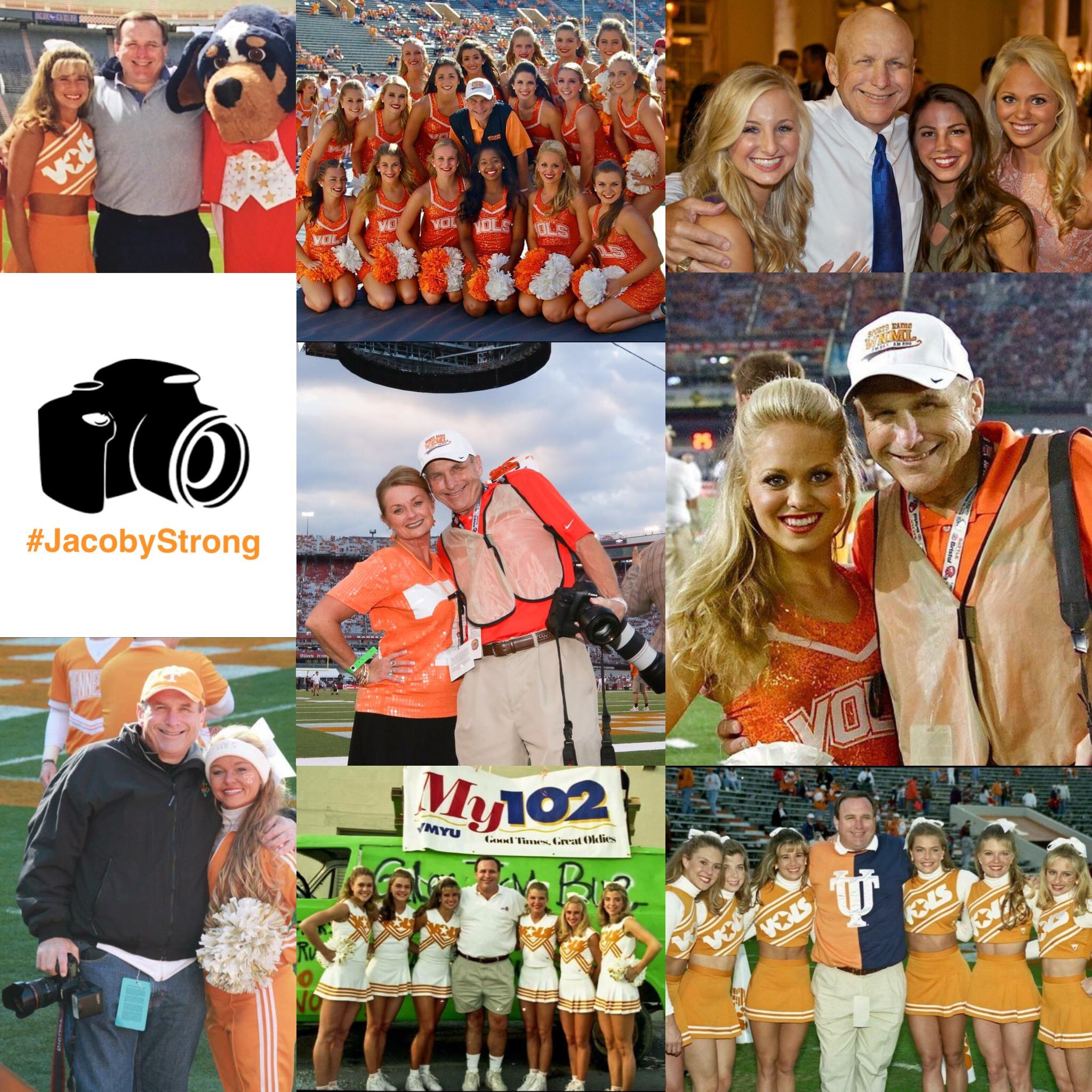 Karl Lagerfeld states that what he likes about photographs is that they capture a moment that's gone forever .....
The UT Spirit Program and I will be forever grateful for the countless moments that Jeff Jacoby captured for the spirit members and me personally. His photography will continue to bring joy to spirit members and their families for many generations. Words could never express my personal gratitude for his passion and dedication to ensure that spirit moms many miles away were blessed by his photos. More importantly, I had the honor to coach Jeff's daughter Angie as well as Kristi. These opportunities afforded me the privilege to witness his genuine love for Sheree and his family first hand. So, please know we are thinking of you during this time of sorrow and to express our sincere sympathy, the spirit members will honor Jeff by wearing a purple ribbon during the upcoming Music City Bowl.

With Heartfelt Sympathy,
Joy M. Postell-Gee
University of Tennessee Spirit
Joy Postell-Gee
December 29, 2016
What a special man! He was the one who was always doing something special for others! I will never ever forget him and his beautiful heart! This world has truly lost a good one but heaven sure gained a special angel! Our family will always treasure our memories of Jeff and feel so blessed to have called him friend! Prayers for his family and many friends during this difficult time. We love you big guy!

Pam Rohde and family
pam rohde
December 29, 2016
It was an honor and a pleasure to have known Jeff as an athlete, student, and an amazing young man at Finneytown High School. He taught this former teacher & coach about courage.

Steve Elliott
Steve Elliott
December 29, 2016
I never met Jeff but got to know him on Facebook and he was so human and so sincere,,big smile and always a positive attitude, he will be missed by many and believe he is in a better place and does not hurt any more..An Angel watching over his family and friends and of course UT, play your hearts out boys give this one to Jeff...God Bless and take care...Carole Steckley
Carole Steckley
December 29, 2016
We have lost one of Knoxville's best. Just thankful for all the years we had with him. So many fun times. Praying for you and your beautiful family, Sheree.
Jim & Kay McIntosh
December 28, 2016
We lost the Coach but his players still have his teachings Doug Mooney
Doug Mooney
December 28, 2016
My deepest condolences to the entire Jacoby family. Jeff and I had some great times at Tech and I regret not staying in closer touch over the years. What I will remember is what a GREAT guy he was and how devoted he was to his family and friends. Rest in peace my friend and see if "Augie" can put a word in to Woody Hayes for you, maybe you can get a gig as the Ohio State play by play man up there.
Shawn McDonnell
December 28, 2016
Thoughts for the family and all who loved Jeff. Enjoyed listening to him for years. He left a wonderful personal and professional legacy. 1st Corinthians 13
k c
December 28, 2016
Sheree, So sorry to read about the passing of Jeff. Our deepest sympathy to you, family and friends. Our thoughts and prayers are with you in your time of sorrow. Remember Jesus' loving invitation at Matt. 11:28-30.
Uly & Lula
December 28, 2016
My sincere condolences to the Jacoby family. Knoxville and E. TN have lost one of the best and most colorful sports enthusiasts ever.
Lee Miracle
December 27, 2016
Sherry,I am so sorry for you and your families loss of Jeff.Andrea and I are praying for you and your family and that GOD will give you comfort during this stressful time. R H
December 27, 2016
Showing 1 - 21 of 21 results