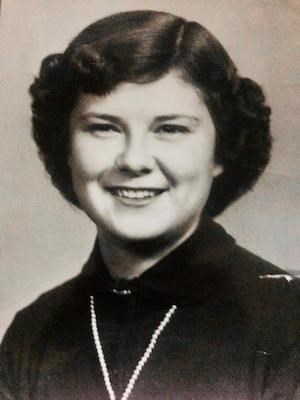 Knoxville - Joan Elaine Smith, age 83, passed away peacefully in her sleep on Sunday, September 20, 2020, after a hard-fought battle with Alzheimer's and dementia.

Joan was born to Frank Byrd and Joanna Lane Byrd on September 26, 1936 in Sevierville, Tennessee. As a child, Joan excelled in school, but enjoyed nothing more than living and playing on her family's farm. In 1955, Joan graduated from Sevier County High School and was honored by students and faculty with the Daughters of the American Revolution Good Citizen Award. This award was given to a student who exemplified citizenship, leadership, and patriotism. After high school, Joan attended Draughon Junior College of Business in Knoxville, Tennessee and ultimately took a position at Mutual Insurance Agency, where she worked for over 30 years until her retirement.

Joan was a devoted wife, mother, and grandmother. She was also an avid sewer and enjoyed making and giving away hand-stitched quilts for many years.

Family and friends will gather 11am Saturday at Piney Grove Cemetery for graveside service.

In lieu of flowers, donations may be made in memory of Joan E. Smith to St. Jude Children's Research Hospital.


Published by Knoxville News Sentinel from Sep. 22 to Sep. 23, 2020.
To plant trees in memory, please visit the Sympathy Store.
MEMORIAL EVENTS
To offer your sympathy during this difficult time, you can now have memorial trees planted in a National Forest in memory of your loved one.
MAKE A DONATION
Please consider a donation as requested by the family.
MEMORIES & CONDOLENCES
0 Entries
Be the first to post a memory or condolences.