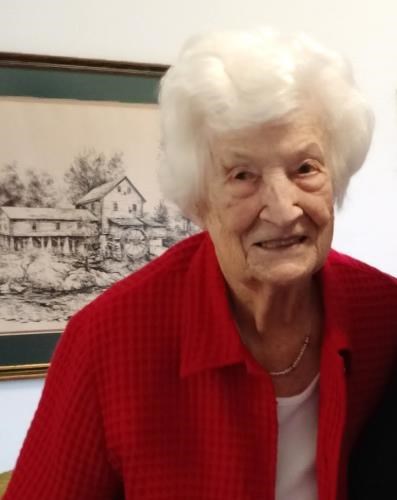 She was dearly loved and respected by her immediate and extended families because of her loving service to others, perseverance over a lifetime of challenges, including the Great Depression and World War II, and her irrepressible strength of character.

She was born in Pigeon Forge, TN to Ellen Walker Davis and Joseph Emert Davis on February 11, 1920. She was preceded in death by her parents and 4 siblings: Martha (Ray), Dan Davis, Kathryn (Shepherd) and Frances (Wynn).

Mary Emert graduated from Sevier County High School and left Pigeon Forge in 1938 when she rode the bus to Athens, TN to attend Tennessee Wesleyan College. At TWC she played basketball, was a beautiful May Queen and studied a secretarial curriculum which eventually landed her a job at Athens Plow Company. There she met her future husband, William P. (Bill) Willson, whom she married in 1944. Bill preceded her in death in 1996 after 51 years of marriage.

Mary Emert and Bill were married on Coronado Island, CA while Bill was on leave from the Navy. She rode the train to California with her future in-laws, Lucy and E.L. Willson, and returned to Athens with them when Bill was shipped out to the Pacific shortly after their wedding. After Bill's return from WWII, they began their family and had 4 children, all who survive them: Bud (Janice) Willson of Liberty, SC, Joellen (Richard) Dickey-Dyer of Chattanooga, TN, Sandy (Allison) Willson of Memphis, TN, and Julia Anderson of Dolores, CO.

As a child, Mary Emert was taught the saving gospel of Christ in her tiny Methodist Church in Pigeon Forge. She died believing that same gospel. In her adult years she was a member of the First Baptist Churches of Athens and Niota,TN, where she served as organist for over 40 years up to the age of 90.

The family will receive friends on Friday, March 30th from 1:00-3:00 pm at Smith Funeral Home in Athens, TN. A Celebration of Life service will follow in the chapel, led by Sandy Willson. Burial will follow the service at Cedar Grove Cemetery in Athens.

If you are unable to attend this service or visitation you may sign the guest register at www.smithfuneralandcremationservicesofathens.com.