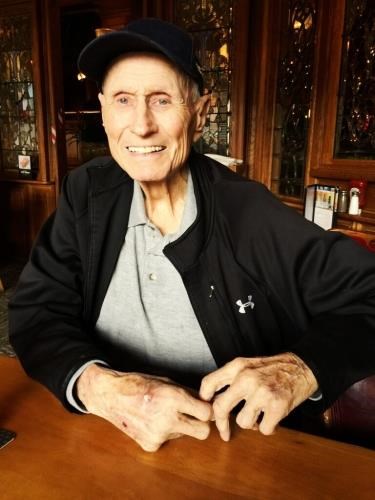 husband, Phil had enough charisma for 20 men and the heart to match. All-State in football and basketball at Young High School, and All-American at bulls----ing on the streets of South Knoxville and the MacAnally Flats, Phil was the

center of attention of whatever room he

commanded. Armed with a searing intelligence and a creative, mischievous eye, the only thing he loved more than his family and friends was riling them up through the recounting of embarrassing stories (of which he would invariably embellish) at their expense, or by outright pranking them. Everyone was fair game, but his employees at Clapp Tire Company probably received the worst (read: best) of it. He wasn't afraid to serve a delicious ex-lax milkshake to his employees (unbeknownst to them of course), mail fake letters from the 'V.D. Clinic' to their homes, or scare them halfway to Huntsville by staging a

gunfight at the company Christmas party between two men armed with blank cartridges. His energy and sense of humor will of course be missed, and his love and spirited sense of friendship and family, although irreplaceable, will forever endure. He often said, "The greatest thing you can have in this life is friends," and Phil Clapp had many. Preceded in death by parents John Boston and Sara Jane Clapp; wife of 61-years Lemoyne Clapp; sister-in-law Marjorie Clapp; brother-in-law Bob Wade; and father and mother-in-law John and Nora (Billie) Houck. Phil is survived by brother Dr. Johnny Clapp and wife Betty; daughters Lynne and husband Ronnie Draughon, Krisden and husband Danny Parrott; son PJ and wife Naomi Clapp; grandchildren Dusty, Krisden, and Ronnie Draughon, Brandon Parrott, Madison, Rocko, and Arlo Clapp; great-grandchildren Dylan and Devyn Draughon, Londyn Crawford; sister-in-law Phyllis Wade; half-brother-in-law Johnny Houck; niece Rhonda Whitt; nephews Robbie, Roger, and Richie Wade. The family will have a graveside service Saturday, November 3rd, at 11am at Woodlawn Cemetery, 4500 Woodlawn Pike, Knoxville, Tennessee 37920. Rev. Don Wilson will officiate. Condolences may be offered at www.berryfuneralhome.com.
Published by Knoxville News Sentinel from Nov. 2 to Nov. 3, 2018.
To plant trees in memory, please visit the Sympathy Store.
MEMORIAL EVENTS
Nov
3
Graveside service
11:00a.m.
Woodlawn Cemetery
4500 Woodlawn Pike, Knoxville, TN
Funeral services provided by:
Berry Funeral Home
MAKE A DONATION
MEMORIES & CONDOLENCES
Sponsored by Berry Funeral Home.
32 Entries
South Knoxville will never be the same without Phil andLemoyne! So sorry we lost them. Missed and loved by so many people!
Charlotte Frye
Friend
October 27, 2021
Prayers for your family.
Jeannie Rhodes
November 7, 2018
I'm so sorry about your loss , I really loved your Mom and Dad, they was like our family, at the Lunch. We saw them every day for years. They will be sadly missed.
William Collier Jr.
November 5, 2018
So sorry the losses keep piling up on you guys.
We enjoyed your mom and dad so much when they drove down for sister Norma's 80th birthday.

Steve & Betty Halsey
Steve Halsey
November 5, 2018
PJ & Family I'm so sorry for your loss, once again heaven has gained another angel Ik Phil & Lemonyne from Lunch House served them many years & always diced Phil's onion for his beans! He always made my day with his pranks or funny jokes!!!
Sheila Eldridge-Upton
November 4, 2018
Have known Phil for many years. Friendship as long. My condolence to his family.
God bless. He was a wonderful man.
Herman Goddard
Friend
November 4, 2018
While Standing in line at the bank , a very nice man asked if I knew Of Johnny Knoxville, I said yes , and he proudly talked of his son Sorry for our loss
K J
November 4, 2018
Lynne, Krisden, P.J. and Johnny...You have my deepest sympathy. I have lost my friend of 67 years. We shared great memories, fun and laughs over the years. May God comfort each of you with his love. Kermit & Marie Fox
Kermit Fox
November 3, 2018
Kermit Fox
November 3, 2018
That has to be the most accurate obituary I've ever read. Phil was one of a kind for sure. He will be greatly missed, but never forgotten. RIP my friend.
Rob Foust
November 3, 2018
Thinking of you during your time of loss. Sending my deepest sympathies. I thinks so much of your family.
Dot King.

Phil and Lemoyne were very special friends of mine, since childhood. They will always remain close to my heart. Yes, Phil will always be remembered as the number one prankster.
My heart goes out to each of you. May God bless and comfort you during this time.
Ellie Lowery
November 2, 2018
May God bless you and your family in this time of sorrow.
Benny Glover
November 2, 2018
PJ, Krisden, Lynne, I am so sorry for your loss. Praying for you all at this difficult time, for God's comfort and peace .
Jerry Stover
November 2, 2018
To the Clapp Family, I am so saddened to hear of Phil's passing. You are in my thoughts and prayers. Phil was one in a million and will be missed by all who knew him. Norman and I were on the receiving end of some of your Dad's joke and that will never be forgotten, neither will Phil and Lemoyne! Love you all. Paralee
Charlotte Frye
November 2, 2018
Lynne, Krisden and PJ sorry to hear the passing of your father. You all don't remember me but my father was Leroy Dixon who worked for your grandfather and father at Clapp Tire Company for many years. I remember when all three of you were born and I remember your mother also she was a very sweet lady. Praying for you all doing this time. May God comfort and keep you in his care. Your dad was a wonderful man he will be missed very much.
Thelma (Dixon) Baxter
November 2, 2018
Showing 1 - 32 of 32 results