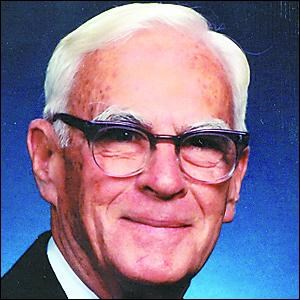 Ross Barnes Summitt, age 99, of Sevierville, died peacefully at home Saturday October 24, 2015. He was a member of First United Methodist Church in Sevierville. Ross was born on July 24, 1916 and raised in Monroe County, Tennessee, the eldest of five children. His early years helping on the farm developed his life-long work ethic, self-discipline, and love of being outdoors. His stories of rising early to milk, hauling it and various family and locals to town, going to school, and then gathering everything and everyone up (you were left if tardy) to return home to milking, chores, and homework evidenced his early acceptance of responsibility. The difficult times of the Great Depression left their mark and ingrained his conservative values of thrift and of maintaining your land, equipment, and assets, especially those for present and future family. He continued to help farm, but after high school graduation he began working in community banking in Sweetwater until he volunteered for the U.S. Navy in late October of 1941. Without returning home for four years, he served his country all over the world, ferrying planes as navigator, and then hunting submarines in the PBY "flying boat" primarily in the North African theater. He worked his way up to the rank of Chief Petty Officer and was honorably discharged on October 19, 1945. After WWII he continued his education, graduating from business college while working in banking in Sweetwater, then Kingston and Cleveland before being hired at Sevier County Bank, July 1, 1949; the year became even more special when he married Mae Kimbrough on November 25, 1949 and brought her to Sevier County where they enjoyed a wonderful life together for 60 years.

His total banking career stretched nearly 80 years with over 60 with Sevier County Bank where he served as Cashier, EVP, President, Director and Chairman of the Board. Under his leadership SCB installed the first night-depository, drive-thru teller window, and the first fully networked and encrypted ATMs in Sevier County. He held various positions and received a number of awards from the Tennessee and Independent Bankers Associations. The stories of his vision and intelligence in lending are too numerous to tell but two examples are the total financing of three miles of sidewalks in Pigeon Forge in the 1970s and being the only local bank to participate in the large funding syndication of the 1982 World's Fair because he believed it would benefit Sevier County. He led the formation of Sevier County Bancshares, Inc (SVRH) in 1984 and presided over it for over 25 years. He was integral in the property acquisition, planning, design, construction, and opening of the Sevier County Bank headquarters in May 2006, making sure "his" customers and employees were secure, well served and had plenty of free parking. The Summitt Board Room on the 4th Floor was named (without his knowledge) in his honor. He retired as President in 2009 and as a Director of Sevier County Bank and Bancshares in 2012; however, he always kept up with the Bank, banking and especially his long-time customers.

Banking was his occupation and farming his passion; he loved Tennessee Walking Horses and was owner and breeder for many years with a life-time achievement of seeing his TN Walker, Midnight Copy J, ridden by his daughter Mary, win an Amateur World Grand Championship and then circle Neyland Stadium for UT's Homecoming in 1981. He was very active in anything he did whether chairing the building committee for the new First United Methodist Church sanctuary, being treasurer for the Sevierville Lions Club & Smoky Bowl, charter member and treasurer of the Sevierville Chamber of Commerce, Charter shareholder of Sevier Farmers Cooperative, a long-time member of American Legion Post 104 or as trustee and treasurer of Shiloh Memorial Cemetery. Ross and Mae Summitt have surely left a significant legacy that shall endure.

In lieu of flowers, the family requests friends to consider a donation be made to Shiloh Memorial Cemetery, c/o Lanning Wynn, 113 Joy St., Sevierville, TN 37862 or First United Methodist Church of Sevierville, 214 Cedar St., Sevierville, TN 37862. The family will receive friends from 4:00-6:30 PM, Tuesday with funeral service to follow at 7:00 PM at First United Methodist Church in Sevierville with Rev. Bruce Galyon and Rev. Jeff Lambert officiating. Eulogy provided by Gary Wade. Family and friends will gather 10:00 AM, Wednesday at Shiloh Cemetery for graveside service and interment with military honors provided by American Legion Post #104. Arrangements by Atchley Funeral Home, Sevierville. Online condolences may be made at www.atchleyfuneralhome.com.

Published by Knoxville News Sentinel from Oct. 26 to Oct. 27, 2015.
To plant trees in memory, please visit the Sympathy Store.
MEMORIAL EVENTS
To offer your sympathy during this difficult time, you can now have memorial trees planted in a National Forest in memory of your loved one.
Funeral services provided by:
Atchley Funeral Home
MAKE A DONATION
MEMORIES & CONDOLENCES
7 Entries
we are so sorry david and karen dyer sutters mill apts
October 28, 2015
Heartfelt sorrow for the loss of our friend and banker who encouraged our success as newcomers in 1982. Thank you for your legacy of alertness and devotion. This town is a richer place thanks to your leadership. Best of all the twinkle in your eye talking horses. Our condolences to the family
Tifton and janice, kendra and kelsey Haynes
October 28, 2015
RB,
Your father was all a community banker should be. He had a dedication to his faith, his family, his community, his customers, and his bank. An example for us all. My condolences to you and all family in his passing.
Tom Tuck
October 28, 2015

So sorry to hear about your Dad's passing. We are out of town but we are thinking of you. He was admired by many.
Jack & Polly Teague
October 27, 2015
What a gentleman....what a friend to our family....what an incredible legacy....this community has lost an institution....our heartfelt prayers are with you....what a life to celebrate
Geoff Hill
October 26, 2015
R.B.and Liz,
My thoughts and prayers are with you and your family in the coming days.