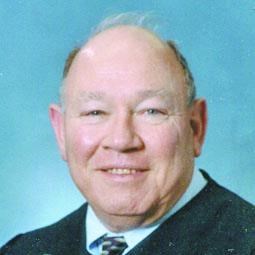 Robert Thomas Stinnett was born February 29, 1944, Nashville, TN; and died August 23, 2016, Chattanooga, TN. Tom graduated from Nashville East High School, the University of Tennessee and the University of Tennessee Law School. He was a member of Phi Gamma Delta fraternity and ROTC. He was past president of the Chattanooga Civitan Club. He was a member of St. John's Lutheran Church for over 30 years. Upon graduation from UT he was commissioned into the U.S. Army as a second lieutenant. After serving the U.S. Army in Naples, Italy, Tom returned to Tennessee to attend UT Law School. Following graduation he clerked for his father-in-law, James Parrott, Tennessee Court of Appeals and practiced law in Knoxville for 20 years at Stone and Hinds. In 1994, he was appointed U.S. Bankruptcy Judge for the 6th district and relocated to Chattanooga where he served as Judge for 16 years before retiring in 2010. In Tennessee, he loved spending time with his children and grandchildren, bridge at the Chattanooga Bridge Center and being with both new and lifelong friends. Tom loved the warmth and sunshine of winters in Mexico and the camaraderie of friends and neighbors he met there. He spent many hours "holding court" at the pool, winning at poker and bridge and hosting many house guests. Wherever he was on February 29, he always had fun on his leap year birthday and delighted in reminding you that this year was only his 18th birthday. Tom loved life, never met a stranger and relished every new day.

The family will receive friends and celebrate his life Friday, August 26 at the Mountain City Club, 729 Chestnut Street, Chattanooga, from 4:00–6:00 PM. Funeral service will be Monday, August 29 at 4:00 with burial following in the columbarium at St. John's Lutheran Church, 544 N. Broadway, Knoxville. Friends and family will gather in the fellowship hall following the service to celebrate and share memories of Tom's life. In lieu of flowers, please remember Tom with a memorial to St. John's Lutheran Church, 544 N. Broadway, Knoxville, TN 37917; Chattanooga Civitan Club, P. O. Box 746, Chattanooga, TN 337401 for the new Chattanooga Children's Hospital or UT College Fund for Law, Attn: Development Office, 1505 W. Cumberland Avenue, suite 248, Knoxville, TN 37996. Arrangements are by the North Chapel of Chattanooga Funeral Home, Crematory and Florist, 5401 Highway 153, Hixson. Please share your thoughts and memories at www.chattanooganorthchapel.com.
To plant trees in memory, please visit our Sympathy Store.
Published by Knoxville News Sentinel from Aug. 25 to Aug. 28, 2016.
MEMORIAL EVENTS
No memorial events are currently scheduled.
To offer your sympathy during this difficult time, you can now have memorial trees planted in a National Forest in memory of your loved one.
Funeral services provided by:
Chattanooga Funeral Home
MAKE A DONATION
MEMORIES & CONDOLENCES
11 Entries
There were so many qualities that made Tom unique--his ability to make everyone feel that their thoughts mattered, his knack for making a friend of everyone he met, his upbeat appraisal of all situations, his capacity for assessing complex problems. It was a gift to have known him.
Al and Linda Jones
September 21, 2016
Annabelle and George Gaffney
His friendly demeanor and good conversation made friends of us all .He will be much missed by so many .Rest well , dear man .
September 20, 2016
Always enjoyed this man's smiling face and positive attitude toward life. He lived it to the fullest. Your Punta Esmeralda friends will miss you at poker and poolside get togethers. Our thoughts are with you and the family Libby. Rick and Wendy Wallace (Nautilus 2 Punta Esmeralda)
September 19, 2016
Tom was a wonderful neighbour and friend, he was always smiling and happy. A joy to have as part of our lives. He will be sadly missed at 4 o clock pool side .
colleen alderliesten
August 31, 2016
Rob and Jay,
So sorry to hear about the loss of your father. My thoughts and prayers are with you during this time. What a lovely man! Still have fond memories of him watching Rob and I play on Dave Dodson's team at Farragut and wonderful memories of him supporting us at Webb.
Andrew Clark
August 30, 2016
Rob & Jay,

My sincere condolences on the passing of your dad. Thinking of you during this most difficult time. May your fondest memories bring you comfort.
Kim Isenberg
August 27, 2016
Tom was a fraternity brother of mine since 1966. I join all the members of Phi Gamma Delta in saying "we will meet again". Our thoughts are with his family. Bud Sherrod
August 26, 2016
Thinking of the family at this time.
Pam Kirthlink
August 25, 2016
The warmth and cheer that were so much a part of Tom have been greatly appreciated by all who came to know him in Mexico. Just chatting with Tom had a way of making the day happier. The pool and poker night will miss his joyful spirit. Our hearts are with you.
Steve and Joyce Scott
August 25, 2016
Bob & Betty Calman
August 25, 2016
We will all miss Tom's love of life and his great smile. He will surely be missed by many of us at Punta Esmeralda. Our thoughts and prayers to his Family
Bob & Betty (Nautilus1) Calman
August 25, 2016
Showing 1 - 11 of 11 results