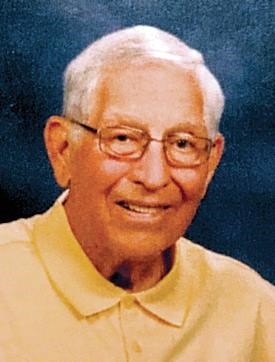 FUNERAL HOME
Feller & Clark Funeral Homes
1860 Center St
Auburn, IN
BUTLER — Duard C. Bellamy, age 85, of Butler passed away on Sunday, October 23, 2016 at Laurels of DeKalb Nursing Home in Butler.
Mr. Bellamy was born on March 30, 1931 in Butler to Raymond and Frances (Clark) Bellamy.
He married Grace Robison on November 4, 1950 in Butler. She preceded him in death on August 6, 2013.
Mr. Bellamy honorably served his country in the United States Navy Reserve.
He worked for 30 years at Edon Machine in Edon, Ohio before retiring in 1992. During his time at Edon Machine he served as president of both the local and national workers union. Prior to working at Edon Machine Duard worked for Federal Fertilizer in Butler and also as a mail carrier in Butler for the United States Postal Service.
Mr. Bellamy was a member of the Butler United Methodist Church and the Butler Lions Club. He also served on the Butler City Council and the Butler Planning Board. He enjoyed bowling in leagues in Butler for many years and he was very active in Butler Little League Baseball. He and his wife had always enjoyed putting puzzles together. After Grace passed away he continued the tradition completing nearly 150 puzzles since 2013. Duard was an avid lifetime Chicago Cubs fan and was excited when the Cubs recently clinched the National League Central Division title.
He was always a loving and attentive spouse, father and grandpa. His faith was of utmost importance in the examples he set for his family and others who knew him well.
Survivors include a son and daughter-in-law, Stephen and Linda Bellamy of Bloomington; two daughters and sons-in-law, Teresa and Stephen Sweeney of Auburn and Jewell and Tom Yoder of Auburn; six grandchildren, Chris and Stacey Sweeney, Bob and Laura Sweeney, Tami and Chris Vaughan, John and Amy Yoder, Sarah and Todd Savage and Nick and Holly Bellamy; 12 great-grandchildren, Aliviah Sweeney, Gage Sweeney, Brooklynn Sweeney, Katelyn Sweeney, Emma Sweeney, Joshua Sweeney, Sarah Sweeney, Devin Sheets, Blake Sheets, Jensen Yoder, Avey Yoder and Allen Joseph (A.J.) Savage; and a sister and brother-in-law, Gail and Thurlow Hay of Auburn.
He was preceded in death by his parents; his wife, Grace; a grandson; Stephen Bellamy II; and four brothers, Harold Bellamy, Dorsey Bellamy, Bill Bellamy and Gene Bellamy.
Funeral services will be held on Thursday, October 27, 2016 at 11 a.m. at the Butler United Methodist Church, 501 West Green Street in Butler.
Visitation will be held on Wednesday, October 26, 2016 from 4-8 p.m. at the Butler United Methodist Church. Visitation will also be held one hour prior to the funeral service on Thursday from 10-11 a.m.
Officiating the funeral service will be Rev. Kevin Marsh.
Burial will be in the Butler Cemetery.
Memorials may be directed to the Eastside High School Athletic Department, 603 E. Green St., Butler, Indiana 46721.
Condolences may be sent to the family at www.fellerandclark.com.
Arrangements have been entrusted to Feller and Clark Funeral Home in Auburn.

Published by KPCNews on Oct. 25, 2016.
To plant trees in memory, please visit the Sympathy Store.
MEMORIAL EVENTS
To offer your sympathy during this difficult time, you can now have memorial trees planted in a National Forest in memory of your loved one.
Funeral services provided by:
Feller & Clark Funeral Homes
MAKE A DONATION
MEMORIES & CONDOLENCES
2 Entries
Teresa, Jewell and Stephan, Sorry to hear of your dad's passing. Just heard of it tonight 11/1. Your dad and mom were always such nice people....Must be where you all get that quality! Thinking of you and your families during this tough transition.
Dalene Armstrong-Pfefferkorn
November 1, 2016
Duard was such a nice man, always enjoyed talking with him at work. Rest in peace....
Becky Tompkins
October 25, 2016
Showing 1 - 2 of 2 results