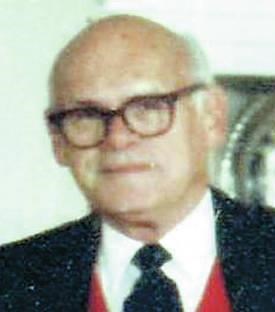 FUNERAL HOME
Hite Funeral Home
403 S Main St
Kendallville, IN
AVILLA — Russell Baker, age 91, of Avilla, died Sunday, June 11, 2017 at Brookdale in Marion, Indiana.
Mr. Baker was born in Albion, Michigan, on April 27, 1926, to the late Warren R. Baker and Naomi J. (Kimmer) Baker. He graduated from Albion High School in 1944 and entered the United States Navy proudly serving his country for two years during World War II. On June 12, 1948, he married Betty Jean Daniels in Albion, Michigan. Russell graduated from the General Motors Institute, Kettering University in Flint, Michigan in 1951 and began working with Central Foundry, a division of General Motors, in Saginaw, Michigan. He moved to Albion, Michigan, and joined Albion Malleable Iron Company where he rose to engineering manager. In 1969, he was promoted to division manager with Malleable Iron and moved to Tiffin, Ohio. In 1975, he joined Amcast in Cochranton, Pennsylvania and in 1977 moved to Sunbury, Ohio with Amcast. In 1985, he moved to Kendallville and was employed with Newnam Foundry until he retired in 1994.
He founded the Mid-America Windmill Museum in Kendallville in 1992 and worked tirelessly for many years to make the museum what it is today. He was also an adult leader in the Boy Scouts of America and he led four of his scouts in one year to earn their Eagle award. He was a member of the American Foundryman's Society, the Society of Automotive Engineers, the American Society of Testing Materials, and the Methodist Church. He also served as board president of the Concord High School in Michigan.
Survivors include a son, Scott and Ann Baker of Newburg, Indiana; a daughter, Rebecca and Pete Lawrence of Ward, Colorado; three grandchildren, Kyle and Teresa Baker of Cedar Falls, Iowa, Holly Baker of Indianapolis and Deleana Baker of Boulder, Colorado; and one great-grandson, Elijah Baker.
He was preceded in death by his wife, Betty, in 2008 and his sister, Janet Perdue.
Visitation will be held Thursday, June 15, 2017 from 1-6 p.m. at Hite Funeral Home in Kendallville.
Funeral services with military honors will be held Friday, June 16, 2017 at 9 a.m. at Hite Funeral Home with Pastor Shalimar Holderly officiating.
Burial will follow at Maple Grove Cemetery in Concord, Michigan.
Memorial donations may be made to Mid-America Windmill Museum.
Arrangements are entrusted to Hite Funeral Home of Kendallville.

Published by KPCNews on Jun. 14, 2017.
To plant trees in memory, please visit the Sympathy Store.
MEMORIAL EVENTS
To offer your sympathy during this difficult time, you can now have memorial trees planted in a National Forest in memory of your loved one.
Funeral services provided by:
Hite Funeral Home
MAKE A DONATION
MEMORIES & CONDOLENCES
0 Entries
Be the first to post a memory or condolences.