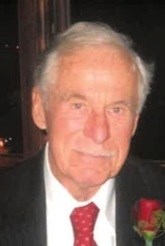 Charles was born, May 25, 1927, in Mindoro, to George and Violet Herrmann. He attended school and graduated from Onalaska High School. He met the love of his life, Flora, at the Galesville Fair. They were united in marriage July 28, 1947. From this union came six children, Carol, Jim, Bill, Sandra, John and David. Charles and Flora enjoyed 71 years together.

Charles responded to many names throughout his life. Some called him Charles, Flora called him "Chas," his friends referred to him as "Charlie," and to his family he was "father, dad and grandpa."

Charles lived an adventurous and full life, in which he wore many hats. He started driving truck for Herrmann Trucking, his family's business, at the age of 15. In his senior year of high school, he enlisted in the U.S. Navy and later in life, he was able to experience the Freedom Honor Flight. After his service in the Navy, he resumed his work at Herrmann Trucking. Charles and Flora also owned and operated the Snow White Laundromat for 29 years. He was a proud member of the Onalaska American Legion Post 336, for 55 years. He served on the Onalaska Fire Department, was a member of the Onalaska Rotary Club and belonged to several motorcycle organizations.

Motorcycles were a passion for him and he owned many. Whether it was traveling with Flora or his many motorcycle friends, thousands of miles were traveled across the U.S. After retirement, Charles and Flora enjoyed spending time in Texas, during the winter months. He also loved to camp and take his sons out West on memorable hunting trips.

Family was a priority for Charles and Flora, and it was in caring for and entertaining their grandchildren and great-grandchildren that brought them such joy. The grandchildren will remember camping trips, bicycle rides, pool parties, rummage sales, motorcycle rides and candy filled piñatas.

He left us all with many cherished memories! We will miss him dearly!

He was preceded in death by his wife, Flora; son, John; daughter, Sandra; his parents; brother, Phillip; and sister-in-law, Charlene.

On behalf of the family, we would like to extend a warm and sincere thank you to the staff at the Onalaska Care Center. Your care and compassion went over and beyond and we are so grateful.

There will be a celebration of life and remembrance gathering at a later date. Condolences can be left at www.couleecremation.com.

Donations in remembrance can be mailed to family members, the Onalaska American Legion Post 336, or the Onalaska Fire Department.

To plant trees in memory, please visit our Sympathy Store.
Published by La Crosse Tribune on Oct. 18, 2020.
MEMORIAL EVENTS
No memorial events are currently scheduled.
To offer your sympathy during this difficult time, you can now have memorial trees planted in a National Forest in memory of your loved one.
Funeral services provided by:
Coulee Region Cremation Group
GUEST BOOK
2 Entries
The Ramey family has a heavy heart for the losses you have endured this month. I will always remember riding on Saturday mornings with Charlie on the breakfast rides with the group. Hope time will heal your pain.
Don Ramey
October 19, 2020
Dear Carol, Jim & all family members, I was saddened to hear that your father passed away as well as your brother, John. I have fond memories of Charlie, always friendly & fun-loving. My thoughts are with you and wishing you comfort during this difficult time.
Carol (Amann-Olson) Reichhoff
October 18, 2020