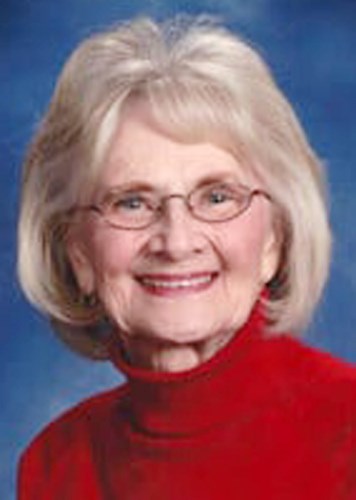 MONDOVI - Our beloved mother, Arlene, age 90, of Mondovi, WI went peacefully and quietly to be with our Lord on the morning of May 19, 2021. Arlene was born August 11, 1930 to parents Herbert and Stella (Torkelson) Anderson in LaCrosse, WI. She grew up on her Grandpa and Grandma's farm in Rockland, WI where she attended a one-room school through eighth grade. She graduated from Logan High School in LaCrosse in 1948, and married Richard Johnson in June of 1949. They were blessed with six children and made their home in Onalaska, WI. The family moved to Mondovi the summer of 1964. She worked for Northern Investment Company and retired after thirty-four years.

Arlene's greatest joys in life were her family and friends. She became a teacher of life just by how she lived her Christian values of faith, hope, and love. These values guided her and gave her the strength, fortitude, and courage to be the perfect Mom and Grandma Andy to her children and grandchildren. She was known for her kindness, listening ear, and energetic personality. Baking, cooking, sewing, crafting, decorating for holidays, and managing a household were all in her repertoire. She was a lady of many talents. Arlene was a card player her whole life and enjoyed a good game of bridge and solitaire. Putting puzzles together, listening to her music, and enjoying a good cup of coffee made her day. Andy had a classy sense of style and an eye for fashion; she was perhaps a bit of a trendsetter. And to the end, she cheered on her favorite football teams, the Blugolds, Badgers, and Packers.

Andy was always very sociable and had a genuine love of people. As an active member of Central Lutheran Church, she served as Secretary on their Council and was a Communion Deacon. She decorated church Christmas trees and baked and served coffee for many functions. She loved her Rebekah Circle ladies and they loved her. Her church family was an important part of her life. Andy also worked at the voting polls, was a garden club member, and a Big Blue Booster Club supporter. She was a member of the American Lutheran Home Auxiliary and served as honorary chair for the American Cancer Society's Relay for Life for Buffalo County. She touched the lives of many through her quiet strength, her compassion, her words of encouragement, her wisdom and humor, her charm, and her beautiful smile.

We will celebrate Arlene's life on Saturday, June 12, 2021 at Central Lutheran Church, Mondovi at 12 noon. Visitation will be at the church from 10 a.m. until time of service at 12 noon. Interment at Onalaska Cemetery, Onalaska. Kindly direct memorials to Central Lutheran Church, Mondovi. Talbot's Family Funeral Home will be assisting the family with arrangements. Online condolences/obituary at talbotfuneralhomes.com.

To plant trees in memory, please visit our Sympathy Store.
Published by La Crosse Tribune on Jun. 10, 2021.
MEMORIAL EVENTS
Jun
12
Memorial Gathering
10:00a.m. - 12:00p.m.
Central Lutheran Church
221 W Main St, Mondovi, Wisconsin 54755
Funeral services provided by:
Talbot Family Funeral Homes Inc
MEMORIES & CONDOLENCES
Sponsored by Talbot Family Funeral Homes Inc.
3 Entries
Love you Aunt Arlene and all my great cousins and relatives. Gods joy and peace!
Danny
June 11, 2021
I mourn the loss of a dear friend. Andy was a wonderful person and will be missed by all who were lucky enough to call her "friend"!
Marilyn Fox
Friend
May 29, 2021
Please accept my condolences on the loss of your beloved family member. She was a kind, loving, caring person. Now she rests at peace, and her memory lives on in the hearts and minds of those who knew and loved her. My first memory of Arlene was at her wedding when I was the flower girl. She was a lovely bride and her beauty endured.
Ann Fenney Horswill
May 29, 2021