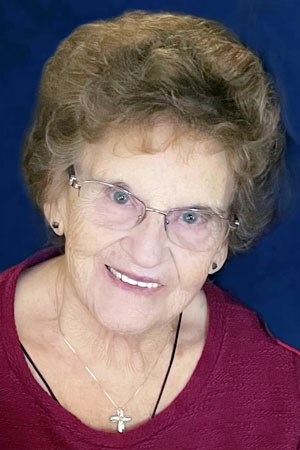 She was born March 23, 1931 in Petersburg, WA, to Richard and Bessy (Hayes) Kidd. She graduated from Boscobel High School in 1948. After graduation, Betty worked for Warner Bros. Co. in Minneapolis, MN, Madison Beauty Supply, and St Mary's Hospital in Madison, WI. This is where Betty met and married her husband of 58 years, John W. Parshall. After marriage, Betty and John took over operations of her father's cheese factory in Mt. Zion, WI. In 1974 they moved to Coon Valley. She finished out her career after working for 35 years at the Villa St. Joseph Nursing home on St. Joseph's Ridge.

Betty's character was one of great strength, warmth, and love. She enjoyed being out in the sunshine, the occasional trips to the casino, pontoon rides, shopping, going out to eat and was an avid Packers fan. More than anything, she loved spending special time with her family and friends (including her faithful "Kitty" Sadie).

A Mass of Christian Burial will be held in Betty's honor at 11:00 a.m. on Saturday, November 27 at St. Mary's Catholic Church in Coon Valley. Friends and family are invited to a visitation at the church starting at 10:00 a.m. Burial will be held at Mormon Coulee Memorial Park. The Seland Funeral Home in Coon Valley is assisting the family. Condolences may be sent to selandsfuneralhome.com.