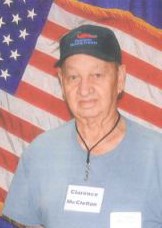 Clarence J. "Mac" McClellan, 90, of Stoddard, passed away on Saturday, July 24, 2021, at the Veterans Affairs Medical Center in Tomah, WI.

He was born in La Crescent, MN, on June 16, 1931, to Marion and Bernice (Hart) McClellan. He married Alice Seidel on March 7, 1953, at the parsonage at First. Ev. Lutheran Church in La Crosse by Pastor Fritz Miller.

Mac entered the U.S. Marine Corps in June of 1948 and served in the Korean War. He was wounded in action and was awarded the Purple Heart in 1950. He was a member of the Disabled American Veterans Chapter 12 of La Crosse. A recent highlight of Mac's life was being able to go on the Freedom Honor Flight to Washington, D.C.

During his work career, Mac worked at different jobs including mechanic, truck driver, delivery driver, along with several others before he retired. In his free time, he enjoyed long walks, being on the river and fishing, playing cribbage and cards, and was known to be a "mean" poker player. He had many friends and was willing to strike up a conversation with anyone he met. His greatest joy was spending time with his grandkids and great grandkids.

Mac is survived by his wife, Alice; his children: Larry (Sandy) McClellan of Genoa, Deb (Gaylord) Elliott of Cross Plains, WI, Linda McClellan of Haslett, MI, Perry (Michelle) McClellan of West Salem, Lori Furman of La Crosse, and Brian (Amy) McClellan of Stoddard; several grandchildren and great grandchildren; two brothers: Bernard of Genoa and Stanley of Sacramento, CA; a sister, Anna Mae, of Great Falls, MT; and nieces and nephews. He was preceded in death by his parents, Marion and Bernice; a grandson, Michael Elliott; a brother, Richard, who died in infancy; and two sisters: Pete and Mary.

Private family services and military honors will be held at the Chapel of Devotion Mausoleum in Woodlawn Cemetery, La Crosse. Schumacher-Kish Funeral and Cremation Services of La Crosse assisting the family. Online condolences may be submitted at www.schumacher-kish.com.

Published by La Crosse Tribune on Jul. 28, 2021.
To plant trees in memory, please visit the Sympathy Store.
MEMORIAL EVENTS
To offer your sympathy during this difficult time, you can now have memorial trees planted in a National Forest in memory of your loved one.
Funeral services provided by:
Schumacher-Kish Funeral and Cremation Services - La Crosse
MAKE A DONATION
MEMORIES & CONDOLENCES
Sponsored by Schumacher-Kish Funeral and Cremation Services - La Crosse.
6 Entries
I will always remember our time spent at my land in Cataract. I never saw you so at ease and at Peace. Wish I had videotaped those times we had. Miss you very much and I will never forget. Love You
Perry McClellan
Son
July 31, 2021
Our condolences to the whole family. We will miss our conversations with Mac. He was quite a guy.
May all of your loving memories help you in the coming days ahead.
Mark & Jane Kruger
Friend
July 29, 2021
This is April McClellan, Clarence's oldest son Larry McClellans oldest daughter. Cam someone from the family please email me with buriel details, [email protected] Thank you
April Mcclellan
Grandchild
July 28, 2021
Our condolences to you families. I wish we would've gotten to know him & the families for we are cousins. My Grandfather was Julius Hart.
Willard "Bill" Hart
Family
July 28, 2021
So sorry for the family’s loss. I have nothing but fond memories of a man who was like a second father to me growing up. He will be missed, but also gave everyone who knew him memories to cherish.
Michael Umberger
Friend
July 27, 2021
He was my oldest and best friend I could ever have. I will miss him deeply. Rest well Dad I will see you when it's my time love you Brian
Brian McClellan
Son
July 27, 2021
Showing 1 - 6 of 6 results