Walt was born Feb. 18, 1924, in Omaha, Neb., to C.W. and Minnie (Brooks) Hammond. He attended several elementary and high schools, graduating from Omaha Central High School in 1941. He began college at Iowa State College, Ames, Iowa, but Naval service interrupted that career. As a U. S. Navy electronics technician first class, he served shipboard in the North and South Atlantic, until his discharge from active duty in 1946. As a member of the U. S. Naval Reserve, he was commissioned as an office after active duty. He completed his college studies in electrical engineering and technical journalism in 1948.

While in school, Walt created and researched a comprehensive book on the history of fraternities and sororities at Iowa State. It was published in book form after his graduation and serves yet as an ISC reference manual.

After graduation, Walt joined the Trane Company, in the advertising department, then moved to sales engineering. It was then that he met Sally Kennard. He was married to Sally June 2, 1951, by the Rev. Harold Stoffel at English Lutheran Church in La Crosse. He later joined his father-in-law, Elmer Kennard, in the Buick Dealership. He acquired the dealership in 1974 and operated it as president, along with his son, David Hammond. He retired in 1990 from the dealership, which by then had acquired several additional automobile brands.

Walt enjoyed golf and traveling, having hosted multiple tours of Europe, the British Isles and Alaska. He served on a number of organizations: Past-president of the La Crosse Country Club, member of the Lutheran Hospital Board of Directors, member of SCORE, 1972 Oktoberfest Festmaster (along with Frau Festmaster, Sally), and continued on the board of trustees of La Crosse Festivals, Inc. He represented area auto and truck dealers on the state association. He also represented Buick dealerships in Wisconsin, on the Buick National Advisory Board. Walt was a member of the Masonic Order, F and A.M. Badger Lodge #345, Eau Claire Consistory 32nd degree, and a proud Shriner and a member of the Zor Temple, Madison. He was also a member of V.F.W. Post 1530 and American Legion Post 52, as well as the Loyal Order of Moose, Lodge 1920. After Walt retired from the automobile business, he worked as a bailiff in the La Crosse Circuit Courts.

Due to current conditions, only private family services will be planned at this time. Honorary pallbearers will be Chris Weiss, Dr. Gregory Ludden, Robert Richardson, Terry Zalewski and Dr. Stephen Webster.

If you wish to give a memorial in Walt's memory, Good Shepherd Lutheran Church in La Crosse, Riverside Transitional Care - Recreational Therapy Dept., or the Shriner's Hospitals for Children-Chicago, or the charitable organization of the donor's choice. Schumacher-Kish Funeral and Cremation Services of La Crosse is assisting the family. Online condolences may be submitted at www.schumacher-kish.com.

Walt's family would like to express their heartfelt thanks to the faithful physicians, nurses and staff at Riverside Transitional Care for their professional care with genuine love and concern.

To plant trees in memory, please visit our Sympathy Store.
Published by La Crosse Tribune from Nov. 18 to Nov. 22, 2020.
MEMORIAL EVENTS
No memorial events are currently scheduled.
To offer your sympathy during this difficult time, you can now have memorial trees planted in a National Forest in memory of your loved one.
Funeral services provided by:
Schumacher-Kish Funeral and Cremation Services - La Crosse
GUEST BOOK
22 Entries
My deepest sympathy Barb in the loss of your dear father. He was a wonderful man that gave so much to others and his community. He will be dearly missed by his family & friends. When my uncle Richard was at the same care center with him I saw your dad a few times when I would visit Richard at meal time. They were friends and able to share some days together in the final chapters of their lives. Let the fond memories bring you peace in the days ahead. Your Dad's love & spirit will be around you always!
Roxanne Nehring
Friend
November 29, 2020
We are so grateful for the times we spent visiting with Walt as we escorted him to Oktoberfest events. There are many smiles, laughs, and great stories that will remain with us forever! He touched our hearts as he did those of many others through the years with his kindness and generosity of spirit.
Silvana and Robert Richardson
Friend
November 25, 2020
Words fail as we bring ourselves to say, rest in peace, dear Walt. You were a fixture for so many years in my and Judge Pappas' courtrooms in both the old and new courthouses. Your humor, humility and grace will be remembered by me and all those who had the pleasure of knowing and working with you. Our deepest condolences to your family. This challenging pandemic is robbing so much from all of us including the opportunity to fully celebrate your extraordinary life together. Here in my household we lift our Octoberfest mugs to the best Festmaster ever, Ein Prosit, ein Prosit Der Gemütlichkeit!
Judge Ramona Gonzalez
November 23, 2020
Barb and Bob, Our sympathy to you and your family on the loss of Walt. He was a treasure to the whole community and will certainly be missed! Bill and Pat Shepherd
Pat Shepherd
Friend
November 22, 2020
Our condolences on the loss of your Dad - he had a good run.
Bill & Mary Jo Gehrking
November 20, 2020
Walt was simply a classy gentleman. He always greeted everyone as if they were his best friend. I remember many fun Sunday rounds of golf with my dad and Walt & Dave. Years ago Walt sold me on Buicks and Buick dealers years ago and I still drive one today.
Dick Pearse
Family
November 20, 2020
Dave and Barb and families. You have mine and Linda's deepest sympathy regarding the passing of Walt. I have many great memories from my time working with Walt. From the new car intros, to the Oktoberfest to the Double Fudge Wudgie desert.

Our hearts and prayers go out to you.

Rick and Linda Sorenson
Rick Sorenson
November 20, 2020
Grandpa Walt as my children called him. For 10 years of the beginning of my married life he felt like family. He made our sales team feel stronger and tighter. We were always happy for him to meet everyone we worked with. He had a personality larger than life. A La Crosse icon, He is greatly missed.
Tom and Lois Tucker
Coworker
November 19, 2020
Barb and family, I am so sorry for your loss and for the conditions during which you are going through all of this. Know that many are keeping you in their thoughts at this time.
Kraig Brownell
Friend
November 19, 2020
Dave, Dianne and family: We would like to offer our thoughts, prayers and sympathy to you in the loss of your dad. Walt had a wonderful life that he lived to the fullest as his many accomplishments and awards attest to. And now he is reunited with your mom, Sally. Enjoy all of the memories.
Leslie and Gene Shumann
November 19, 2020
My condolences to Dave and Barb and their families . Walt was a great man, good place to work right out high school. Very fond memories to the new car introductions, to the Octoberfest prep and parades. Really enjoyed working for the business at 40 Copeland Ave. Always an honest place to work.
Bruce Meyer
November 19, 2020 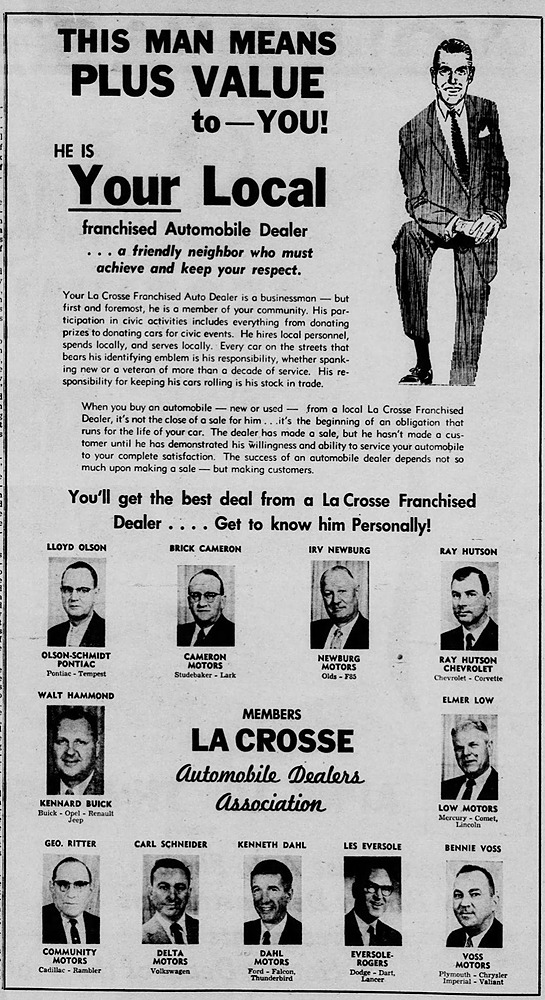 Having worked for and with him for several years at Walt Hammond Buick I found him to be the type of person that truly cared for his employees and their families. And, in return it was easy to give our all. Our dealership lit up during Oktoberfest and our epic parade day parties at 40 Copeland Ave were an annual highlight. One personal memory was being his “driver” in several Maple Leaf parades and watching the people on the parade route respond to his exuberance as a past Festmaster.

Our condolences to Dave and Barb and their families ... He meant so much to so many.
Mike and Donna Warren
Coworker
November 19, 2020
Walt was a great boss and friend the ten years that I worked at Walt Hammond were the best of my career my condolences to his family
Steve Hagen
November 18, 2020
I was saddened to read of the passing of Brother Hammond, and my thoughts and prayers are with his family, friends & chapter brothers. While I never had the privilege of meeting Walt, I pledge that the SigEp Patriots Project will always remember him, his life & his patriotic service. Rest easy Shipmate/Brother. We have the watch. VDBL
Ed Jones
November 18, 2020
As the La Crosse County Clerk of Court, I would like to express my sincere sympathies to your family. Walt was such a wonderful bailiff when he worked here. He made all of the jurors feel welcome to the courts and always made my job a little easier by being here.
Pam Radtke
Coworker
November 18, 2020
My parents died in their nineties. What amazing times they lived through. Barb, I know you spent as much time as possible with your dad. Thinking of you and yours.
debbie Bartel
Friend
November 18, 2020
I met Walt through Sally who was in my Senior Water Exercise classes at the YWCA many years ago. They were both people that made me happy just to see them and their smiles. I am sure they are smiling now as they are joined in eternity.
Sue Bulk
Acquaintance
November 18, 2020
David and family, very sorry to hear of your fathers passing away. From your stories in the past I believe your father lived a very good and rewarding life. Sadly words don't erase the pain but as time goes on the great memories will overshadow the pain and good memories will prevail. May God bless and keep you all..
JIM TAYLOR
Coworker
November 18, 2020