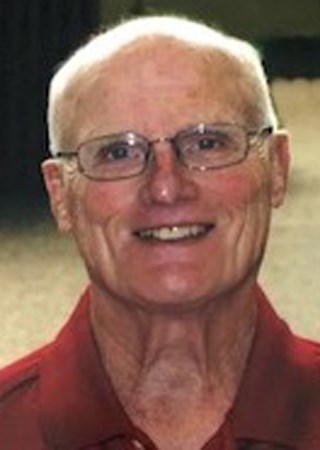 ONALASKA - David Arlo English, 78, of Onalaska passed away Thursday August 26, 2021 at his home with his family. He was born September 28, 1942, in Minneapolis to Arlo and Josephine (Voit) English. On June 20, 1964, he married JoAnn Goldman. David was a 1960 graduate from Albert Lea High School. In 1964, he received a BA in mathematics from St. Mary's University. He later received a master's degree from the University of Wisconsin-LaCrosse. In 1964, David was hired at Aquinas High School as a math teacher and wrestling coach. He served as a wrestling coach for 15 years. He continued to serve as a teacher until his retirement in 2000. In 1979, David was recognized for his outstanding coaching career. Under David's direction, Aquinas won 2 consecutive WISAA State Championships, 5 Conference Championships and 7 city titles. In 2011 he was granted the St. Francis Staff Award for having a significant impact on the students of Aquinas High School.

David also worked part-time for the Onalaska Parks and Recreation Department as a member of the grounds crew and youth baseball staff. His service to the Onalaska Parks Department continued after his retirement from Aquinas until June of 2021. He enjoyed many passions including hunting, fishing, bird watching, Twins, Vikings, and Loggers games, and especially events his grandchildren participated in.

He was preceded in death by his parents; his father-in-law and mother-in-law, Alvin and Florence Goldman; and his brothers-in-law Lyle Foley and Darwin Haroldson.

A Funeral Mass will be held at 11 a.m. Thursday SEPT. 2 at St. Patrick's Catholic Church in Onalaska, 1031 Main St. Onalaska. Father Steven Kachel will preside. Burial will be held at the Onalaska City Cemetery. Visitation will be held from 4 to 7PM Wednesday at The Gathering Place, 133 Mason St, Onalaska and day of the funeral at 9:30AM at the church.

The family has designated Aquinas High School and the Onalaska Park & Recreation for memorials.

Published by La Crosse Tribune on Aug. 29, 2021.
To plant trees in memory, please visit the Sympathy Store.
MEMORIAL EVENTS
Sep
1
Visitation
4:00p.m. - 7:00p.m.
Coulee Region Cremation Group
133 Mason St, Onalaska, WI
Sep
2
Visitation
9:30a.m.
St. Patrick's Catholic Church
1031 Main St., Onalaska, WI
Sep
2
Funeral Mass
11:00a.m.
St. Patrick's Catholic Church
1031 Main St., Onalaska, WI
Funeral services provided by:
Coulee Region Cremation Group
MAKE A DONATION
MEMORIES & CONDOLENCES
Sponsored by Coulee Region Cremation Group.
11 Entries
RIP Dave, Condolences to Family and Friends. Dave worked very hard developing great young men through the wonderful sport of wrestling
Larry Vincient Marchionda
September 5, 2021
My condolences to the entire Family. I'm a 1971 Graduate from Aquinas and finished 2nd at State under his (and Jack's) tutelage. I loved his passion for wrestling. He was a Good Man. One day in Geometry class he called on me to review yesterdays lesson. I had no idea what he was talking about. I was knocked out in football practice the night before only remember waking up in my bed. My classmates explained I was knocked senseless. His response was "Okay anybody who was not knocked out yesterday?" I enjoyed going back my Freshman year in college and wrestling with John Kaufman to give him some serious competition. I have a lot of great memories because of him. His passing really left me with a genuine sense of loss. He was the only teacher who came to my brother Kennys funeral. He really was a Good Man. My prayers are with you all.
ronald fitzpatrick
School
September 3, 2021
Mr. English was my favorite teacher. He challenged me and made learning fun. I'm sorry to hear of his passing. Please know my prayers are with him and your family.
Mary Jo Graves
September 2, 2021
Thinking of you all during this difficult time and sending prayers your way.
Kristen Herriot (Kamla)
Friend
September 1, 2021
To JoAnn and family. Sending my condolences as I am in Colorado and can´t come to the wake. Will always have good memories of DAVE.
Bonnie Smith
September 1, 2021
Mr. English was the only math teacher I ever understood!
Paula Lamke
School
September 1, 2021
JoAnn and family, My heartfelt sympathies to all of you. David was one of a kind! He had a thousand watt smile that oozed kindness and love. I will always remember when he came to our home after Jena was born bearing a lovely blanket made by you, Jo. I will hold that memory in my heart forever. He was so very happy for my husband and me. When he would come to an athletic event and I was announcing, he always made the time to come and say hi and that made my day! He made an impact on so many people as you well know. He will be missed greatly but you can be comforted in knowing that his legacy will live on in his children, grandchildren, and those still to come as well as those he touched through his teaching, coaching, and friendships. All my love, Julie Ender
Julie Ender
Friend
August 30, 2021
Met Dave at Sam's having morning coffee and what a wonderful man. I liked him when I first met him. Teased him about the Vikings and he took it well. More importantly he was a religious man and I identified this with him. GOD BLESS. He definitely is in heaven. JOHN 3:16. RUDY
Rudy Wuest
Friend
August 30, 2021
We are both 1974 grads of Aquinas H.S.,and fondly remember walking the halls under the watchful eyes of Mr.English&Mr.Nockels- you didn't mess w/either one of them!Mr. English,keep those angels in line!
Tom&Sandra Stingl
School
August 29, 2021
As a 1973 graduate of Aquinas High School, I had Mr. English for geometry. I wasn't very good at math, but he was so good I did really well. He was a great teacher and a great guy-God Bless him and his family!
Carolyn R. Muchow
School
August 29, 2021
My sincere condolences to the English family on Dave´s passing. Like many, I was coached by Dave. It was the summer of `89. I had no idea what I got myself into. He was the first coach to hold us accountable. We couldn´t be late. We couldn´t slack. He was never hard on us for our ability, but if our effort or focus was not to his standard, he would let us know. We didn´t know it then, our parents did, but it was exactly what we needed. Even this morning my friends and former teammates on the Onalaska 10u Green baseball team are sharing some great stories of Coach English. He was an impactful man; a true inspiration for those looking to be a positive mentor for young kids.
Brendan Dwyer
August 29, 2021
Showing 1 - 11 of 11 results