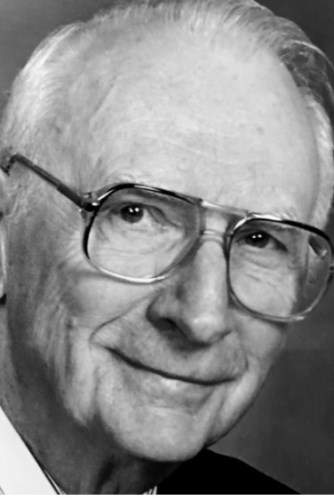 David Oliver Keller, 94, died Saturday, Nov. 14, 2020. He was born in Cochrane, Wis., Feb.10, 1926, the son of Esther (Bade) and Oliver Keller and a third generation descendant of Swiss emigres Rachalia Spörnlin (Bollinger) and Henry Keller who settled in Buffalo City, Wis., in the mid-19th century.

Following his graduation from Cochrane High School in 1944, he joined the Navy where he served stateside, stationed on Long Island, N.Y. until 1946. He attended UW-Madison for three semesters before returning to Cochrane where he lived the remainder of his life.

He was hired in 1949 as a general laborer at Dairyland Power Cooperative in Alma, Wis., and retired 40 years later in the role of switchboard operator.

He met Alethea Blank at the Prairie Moon dance hall near Cochrane in 1951. They wed six months later and were married for 63 years. Their children are Katherine Keller (Milwaukee) and Daniel Keller (Cochrane).

A devoted husband, Dave possessed a genial, fun-loving nature. He liked to tease and play pranks on unsuspecting nieces, nephews, and neighbor children. He often quoted Jack Benny, telling them, "My eyes are bluer than a hitchhiker's thumb in Alaska."

Fond of music, among the favorites of his record collection were the big band and polka albums. He could identify scores of land and water birds that inhabit or migrate through Wisconsin. He played bridge, 500, and sheepshead with neighbors and family members. He read history and biography and was a talented vegetable and flower gardener. In his basement woodshop, he made bird feeders, birdhouses, and other projects. Fond of travel, he and Alethea enjoyed excursions to Hawaii, Alaska, and visiting family members in the Dakotas. His Swiss and German heritage was evident in his fondness for the occasional lager, cheese, braunschweiger, sausage, sauerkraut-and chocolate.

His favorite pastime was fishing on the Mississippi River, whether from his boat or ice shanty. Dave looked forward to Canada fishing trips with his brother Emmett, his nephews, and son Dan. He hunted ducks, quail, grouse, pheasants, and deer.

He was a lifelong Green Bay Packers and New York Yankees fan, followed the Milwaukee Braves and Brewers, and was an avid UW Badger football and basketball fan. He eagerly anticipated the Wisconsin high school basketball play-offs each year.

He will long and lovingly be remembered by his children, Emmett's wife, Anne Keller; nephews, Steven Keller and wife, Susan, Michael Keller and wife, Paula, James Keller, John Keller; niece, Sarah (Keller) Hoefflin and husband, Frank; nephew, David Blank and wife, Arlene; and great-nieces and nephews, all whom he loved and admired.

Due to the pandemic, a celebration of life will be postponed until a later date. A private burial service will be held at the Buffalo City Cemetery.

The family offers its gratitude to the kind and warm-hearted staff at St. Michael's Assisted Living and Winona Health Home & Hospice. Talbot Family Funeral Homes of Cochrane, Wis. assisted the family with arrangements. Condolences and memories may be shared with the family at www.talbotfuneralhomes.com.

To plant trees in memory, please visit our Sympathy Store.
Published by La Crosse Tribune on Nov. 18, 2020.
MEMORIAL EVENTS
No memorial events are currently scheduled.
To offer your sympathy during this difficult time, you can now have memorial trees planted in a National Forest in memory of your loved one.
Funeral services provided by:
Talbot Family Funeral Homes Inc
GUEST BOOK
0 Entries
Be the first to post a memory or condolences.