Don was born Jan. 22, 1949, in Chicago and grew up in Cicero, Ill. His official date of death was Jan. 23, 2021. He was the youngest son of William B. and Violet J. Henry, founders of Henry's Drive-in on Ogden Ave. (also known as Old Route 66) near Austin Blvd. in Cicero. Don and his brothers, Bill and Bob, grew up as hot dog royalty, working along side their parents, friends, neighbors and relatives, including the inimitable and unforgettable, Aunt Stella Sluka.

He graduated from college at UW-La Crosse with a degree in English and loved the La Crosse area so much that he decided to make it his home. He married Candace Lawson in 1986 and a few years later opened Henry's Top Dog in La Crosse, modeled after the original Henry's Drive-in, which was then owned by his brother, Bob. Unfortunately, the business wasn't sustainable and closed after a couple of years.

But music, not hot dogs, was his life. In the 1960s with the influence of The Beatles, The Dave Clark 5, and all the great rock bands of that era, Don became an excellent bass guitar and keyboard player, despite being nearly deaf in one ear, and after college played with several bands that toured the Midwest and East. He learned the skill of piano tuning and was self-employed in that trade the rest of his life. He and his band mates often appeared at the La Crosse Oktoberfest and clubs, bars and venues around the area. Like his trumpet player father, most of his friends were musicians and he recorded a lot of original music with such titles as "Beyond the Wazoo," "Funky Monkey," "Five Guys" and "Thinking of Dad." The 2020 Covid-19 shutdown limited his jam sessions, but he was optimistic about the coming year.

Don loved camping, fishing and getting together with brothers, Bill and Bob, Bill's brother-in-law, Bob Musil, and his son, James Musil, at the Musil cabin in Crivitz, Wis. The fishing wasn't always great, but the stories, laughter and drinking around the nightly campfires were. Every year Don would haul his boat and motor to Crivitz and some years it even went in the water. He was always accompanied by his fine, proud young golden retrievers - first Jaco, and recently Miles, who has now found a new home thanks to the La Crescent Animal Shelter.

Don died of sudden heart failure a few days before his 72nd birthday, and is mourned by his brothers, Bill (wife, Cynthia) Henry of Santa Barbara, Calif., Bob (wife, Lori) Henry of Leland, Wis.; three nieces and three nephews; many great-nieces and great-nephews; and numerous cousins in the Chicago area. He will be missed by his friends and band mates, Sam Monsoor, Jeff Tesch, Al Fruechte, Paddy Rose, stepson, Trace Lawson and all the boys and girls in all the bands.

To plant trees in memory, please visit our Sympathy Store.
Published by La Crosse Tribune on Mar. 30, 2021.
MEMORIAL EVENTS
No memorial events are currently scheduled.
To offer your sympathy during this difficult time, you can now have memorial trees planted in a National Forest in memory of your loved one.
GUEST BOOK
9 Entries 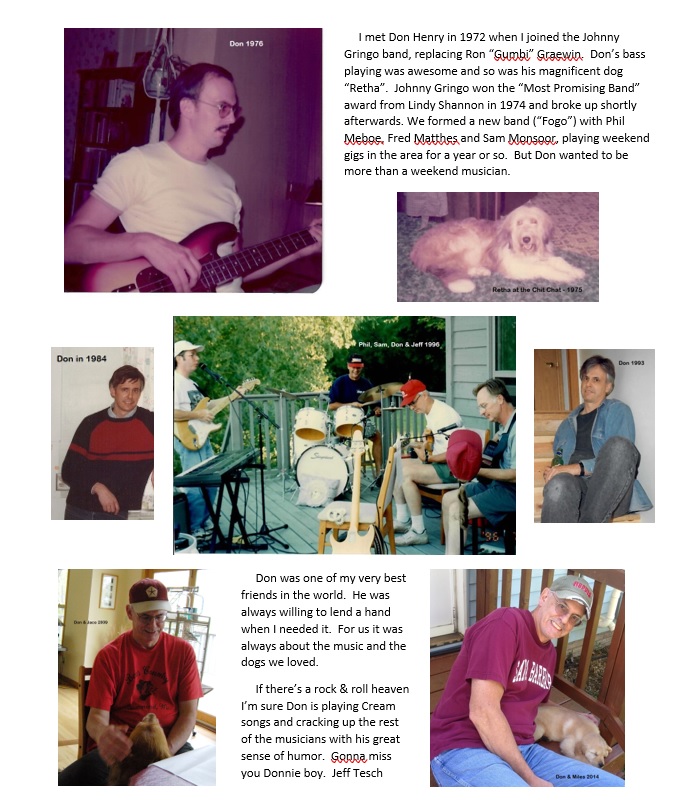 I been missing you already Don. My condolences to Bob & Bill Henry, Trace Lawson and all Don's many friends - and he did have many friends. Hope you be rockin with Jack Bruce, Jaco Pastorius and all the bass players you admired.
Jeff Tesch
April 6, 2021 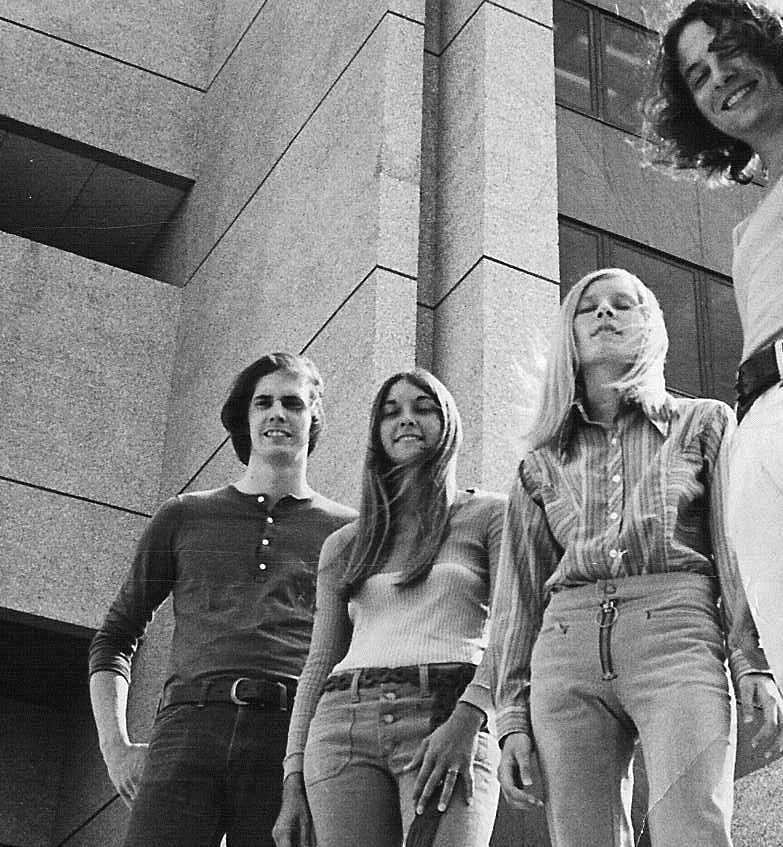 I met Don when we were in college at LSU. He posted a message about starting a band and I contacted him. A local just out of the Air Force I knew some musicians from high school and put together a group that was the house band for parties at Don's fraternity. If I recall correctly, Samuel Monsoor was in that band too. Sam went into the service, drafted I think. Don and I formed another band for a while and then the one with the young ladies in the photo. The one next to Don was the drummer and the one next to me was the singer. That band played all over Southern and Western Wisconsin. When Sam returned Don and I formed a band with Sam, that eventually included Jeff Tesch.
Mike Lennon
April 4, 2021
Don was probably my oldest friend. We started high school together and eventually lived down the block from each other. Lots of good times together at his parent´s house and we saw many concerts together. I remember him getting his Hofner bass and starting a "band" to learn to play the blues together. Fond memories of our "road trip to the past" last year when we visited all the houses we lived in and schools we went to. I miss you buddy. Rest In Peace Don.
Bruce Simak
April 2, 2021
Don was a friend and fellow piano technician and musician. He did some studio recording for me many years ago. May he rest in peace.
Dan Eumurian
April 2, 2021
So sorry to read of Don's sudden passing. Don tuned all of our pianos at Longfellow Middle School for more years than I can remember. He was always friendly, good at his job and professional. He was one of the good guys. May he Rest In Peace.
Jan Sahagian-Crandall
March 29, 2021
Thanks for all the 'jams' and memories in the garage. You will be missed.
Shifty Schaller
March 29, 2021 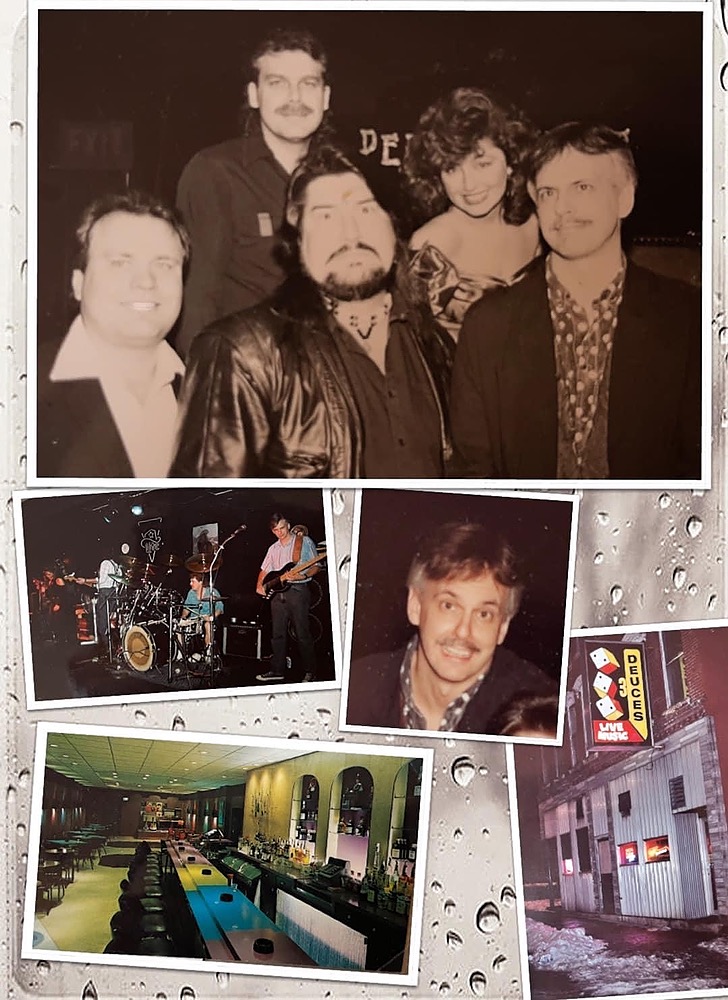 Saddened to hear of the loss of my old friend & band mate... we had a lot of good times playing music together at the 3 Dueces ... my thoughts & prayers are with Don´s family
Holly (Haefner) Nance
March 28, 2021 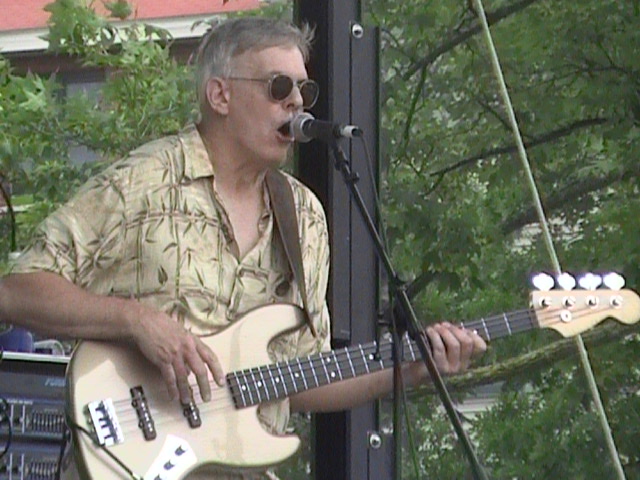 My condolences to the Henry family, Trace Lawson, and all his friends who miss him. Don was a great friend and in many bands with my late husband George. Don would come over for coffee and they would reminisce and laugh about stories on the road. Their last band together, Kingfish, was a great 3 piece blues rock band and included another great friend Shifty Schaller. They would jam and we all attended Shifty and Josie´s annual 4th of July parties and would hang out together. Don sent me Kingfish recordings after George passed that mean a lot to me and he kept in touch. Love you and miss you Don. Now you can hang out with George and your loved ones before you. Rock on
Jan McCune
March 28, 2021
Loved to emulate Jaco Pastorius. A great bass player and a great friend R.I.P. Don
Samuel Monsoor
March 28, 2021