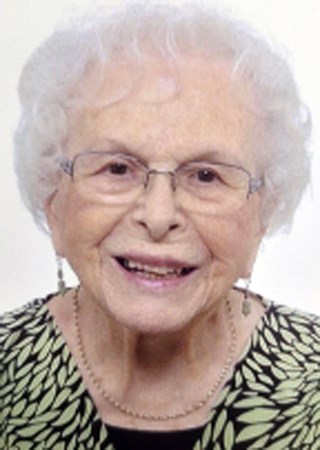 Eleanor was a woman of many interests and many friends. She was a homemaker, worked at the telephone company, was an excellent seamstress who did alterations and sewing for many people, and even did some bar tending. In her younger days, Eleanor enjoyed dancing at the Avalon Ballroom, going to movies, riding the trolley, and league bowling, which she did until age 89. She loved volunteering in the gift shop at Gundersen and going up north on vacation to Mercer, WI for Loon Days. In her later years, Eleanor enjoyed listening to the music of Lawrence Welk, Daniel O'Donnell, and Liberace, plus watching her Hallmark and Lifetime movies, car rides, and feeding and watching her birds, especially her cardinals and her favorite squirrel, Freddie. She kept her mind sharp with crossword scratch-offs and reading everything she could get her hands on. She amazed everyone by how spry and physically fit she was almost to the end of her life. Eleanor loved people and enjoyed being in the spotlight. Her favorite moments were the many times she was interviewed for TV. Eleanor will be remembered as being kind and helpful. She was a grandma to all who needed one. Truly an amazing person.

Survivors include three daughters: Carol (Tony) Knutson of Holmen, Nancy Burgett of La Crosse, and Betty (Ronald) Schams of La Crosse, two grandchildren, Kim Knutson of Holmen, and Kraig Knutson (Julie Kluge) of Middleton, WI; and seven step-great-grandchildren and one step-great-great grandchild. Eleanor is also survived by two "adopted grandchildren" Chris Esser and Dawn McGrath. She was preceded in death by her parents, her first and second husbands, her brother, Harold Flemke, her son-in-law, Lee Burgett, and her grandson, Brent Miller.

The family would like to thank Eleanor's granddaughter, Kim, for the years of care she gave her grandma which allowed her to stay in her home and to her daughter, Carol, for taking her into her home for the last three weeks of her mother's life. Also, a special thank you to Lynn Farrell, friend and neighbor, for all the kindness and special care she gave to Eleanor and to the Gundersen Hospice Staff for their compassionate care.

Funeral services will be at 12:00 noon, Saturday April 17, 2021, at First Evangelical Lutheran Church, 400 West Avenue South, La Crosse. Rev Richard Pamperin will officiate. Burial will follow in Oak Grove Cemetery, La Crosse. Visitation will be held from 11:00 AM until the time of service. After the service, there will be a luncheon at the La Crosse VFW, 630 6th Street South, La Crosse. In lieu of flowers, memorials are preferred for the Coulee Region Humane Society. Arrangements are by Jandt-Fredrickson Funeral Homes and Crematory. Online condolences may be offered at www.jandtfredrickson.com.

To plant trees in memory, please visit our Sympathy Store.
Published by La Crosse Tribune on Apr. 14, 2021.
MEMORIAL EVENTS
Apr
17
Visitation
11:00a.m. - 12:00p.m.
First Evangelical Lutheran Church
400 West Avenue South, La Crosse, Wisconsin
Apr
17
Funeral service
12:00p.m.
First Evangelical Lutheran Church
400 West Avenue South, La Crosse, Wisconsin
Funeral services provided by:
Jandt-Fredrickson Funeral Home
GUEST BOOK
Sponsored by Jandt-Fredrickson Funeral Home.
3 Entries
How can I ever begin to say all the wonderful things that your mother was with her smiles, her laughs, her wit, and all the times we met her. She was such a great lady to know and I'm sure she was the best charming person on this earth. Every time I saw her, she was such a precious person on this earth. It had to be a great pleasure to have her around all these years, and we all enjoyed having celebrated her many birthdays. I'm sure she is celebrating with all her family and friends in heaven. What a great lady to know and love! She will never be forgotten. May the Lord guide her family, both living and deceased. Blessings to all of you. John always enjoyed your mother with her laughter and smiles.
Joan Mutch
April 15, 2021
My condolences to all of you. She was a fun lady. I worked with Betty at the phone company.
Marilyn (Petersen) Polzin-Boardman
April 15, 2021
A dear lady and friend, I used to pick Eleanor up & we would work at the Lutheran Hospital Gift Shop for years. Always sweet and enjoyable, I have many memories and she remains in my heart. Blessings to the Family.
Rita Nelson
April 14, 2021