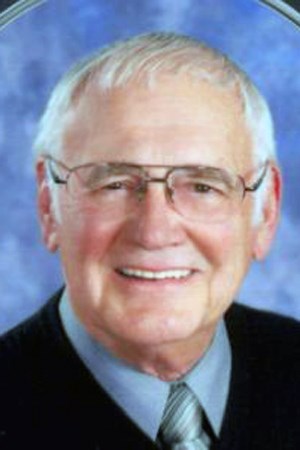 ONALASKA - Gerald "Jerry" L. Roob, 91, of Onalaska and formerly of La Crosse, passed away on Friday, November 26, 2021, at Eagle Crest North in Onalaska.

He was born on April 24, 1930, in Columbus, WI to Louis J. and Frances L. (Hessel) Roob. As a youth, his family moved to La Crosse where he attended St. Wenceslaus Grade School and Aquinas High School, graduating in 1948. Jerry married Louise Ann Skemp on April 28, 1951, in La Crosse. Louise preceded him in death in July of 2000.

Jerry enlisted in the Wisconsin National Guard in September of 1948. After six years of enlisted service, he became a commissioned officer. Over the years, Jerry moved up through the officer ranks holding positions as platoon leader, salvage officer, executive officer at unit level, company commander and executive officer at battalion level, eventually becoming Battalion Commander for the 426th Engineer Battalion. In all, Jerry spent 35 years with the Wisconsin National Guard, with most of his duties performed with the Onalaska units, before retiring in January of 1984 with the rank of Colonel.

Jerry was a devoted husband, father, and grandfather who was generous, kind-hearted, and always willing to lend a helping hand when needed. He was a treasure to his family and his many friends. Jerry worked in the construction trades thoughout his life where he earned the respect of his colleagues and made many long-time friendships. In his free time, he enjoyed golfing and was still actively golfing until recently. He was a long-time member of St. James the Less Catholic Church in La Crosse until he moved to Onalaska

A private funeral mass will be held at 11:00 a.m., Thursday, December 2, at St. Patrick's Catholic Church in Onalaska with Msgr. Steven Kachel officiating. Burial, with military honors, will take place in the Catholic Cemetery. The Mass will be livestreamed and can be viewed on the church's website at www.stpatsonalaska.com. Schumacher-Kish Funeral and Cremation Services is assisting the family. Online condolences may be submitted at www.schumacher-kish.com. In lieu of flowers, please donate to your favorite charity in Jerry's honor.

Jerry's family would like to extend their heartfelt gratitude to the staff at Eagle Crest North and Gundersen Health System Hospice for their wonderful care.

Published by La Crosse Tribune on Nov. 28, 2021.
To plant trees in memory, please visit the Sympathy Store.
MEMORIAL EVENTS
Dec
2
Funeral Mass
11:00a.m.
St. Patrick’s Catholic Church
Onalaska, WI
Funeral services provided by:
Schumacher-Kish Funeral and Cremation Services - Onalaska
MAKE A DONATION
Please consider a donation as requested by the family.
MEMORIES & CONDOLENCES
Sponsored by Schumacher-Kish Funeral and Cremation Services - Onalaska.
8 Entries
Uncle Jerry has been wonderful example for me. I was blessed to be able to spend time with him and Aunt Loupe when I worked in LaCrosse. His generosity, faith, wisdom, commitment and humor made a lasting impression on me. Please know that you are in our prayers as we grieve his passing.
Jim Skemp Jr
November 30, 2021
John, I am sorry to hear of your father's death. You had a wonderful father and he was fortunate to have you as his son. God bless you. Prayers for you and your family.
Liz Helfrich Sharpe
Classmate
November 29, 2021
I'm so sorry for the loss of you dad.
Linda (Larkin) Bjorkman
Friend
November 29, 2021
When Mom [Uncle Jerry's late sister] and I visited with family in 2008 I finally had a chance to get to know Uncle Jerry. Mom was very happy to have spent the time with her brother. He had a good sense of humor and was a good, thoughtful person.
Christine
November 29, 2021
Jerry will be remembered here for his many years of service, not only on the Board of Directors, but as an owner/volunteer helping neighbors where he was able. Always smiling, with a positive attitude. May he Rest In Peace.
Brandywine Condo Association
Friend
November 28, 2021
As time passes, may your sadness of loosing Uncle Jerry ease and be replaced by the tons of wonderful, joy-filled memories. Love you all.
Karon and Peter Gundolff
Family
November 28, 2021
My deepest sympathies on the passing of your father. I remember Uncle Jerry at our holiday get togethers as always being their with gentle kindness, a kidding smile and unfailing love for his family. When he was able, he kept in touch with my Dad and sent Christmas cards to me during a challenging time in my life. What a gift to have him in our lives. Now, I'm sure he is having a wonderful time with Aunt Loupe! May your memories give you peace and wonderful rememberings.
Lisa Skemp
Family
November 28, 2021
John, my deepest sympathy to you and your family.
George Besl
November 28, 2021
Showing 1 - 8 of 8 results