Gerald "Jerry" Thomas Ruff passed away unexpectedly Friday, March 26, 2021, at the age of 66. At the time of his passing, he was surrounded by his loving wife and daughter at his country home in La Crosse, where he spent years growing a family and walking the nature paths that he loved so much.

Jerry's loving presence was first felt Dec. 29, 1954, in Minneapolis, when he was born to Gerald and Mary Kay (Holland) Ruff. His family then moved to Fargo, N.D., where Jerry attended Holy Spirit Grade School and Shanley High School. Growing-up with five brothers and sister, Jerry made sure to keep his parents' attention by pushing the occasional boundary, test-crashing bicycles into trees, and wrestling with his siblings. Jerry also loved to run cross country, listen to a variety of music (James Taylor being a favorite), and volunteering for events like taking care of the elderly.

For higher learning, Jerry received an elementary education degree from St. John's University and a Master's degree in English from the University of Minnesota. It was during this time that Jerry's sister, Mary, introduced him to his better half, Vivian Storm. Although Jerry thought the dates with Vivian started well before they actually did, the couple would eventually come to an agreement on their relationship status. On April 30, 1983, at the Pontoppidan Lutheran Church in Fargo, Vivian's father the Rev. Waldemar Storm, officiated and blessed this wonderful couple's marriage.

In 1984, Jerry and Vivian moved to La Crosse, where their family's roots would grow over the next several decades with four children in tow, three boys and one daughter. Together they built a life focused on faith, family, friendship and love for one another. To help support his family, Jerry occupied several different positions that involved writing, editing, and teaching English. Over the years Jerry was employed with the Diocese of La Crosse as editor of the "The Times Review" newspaper, Capstone Press in Mankato, Minn., and St. Mary's Press in Winona, Minn. He also had some limited work at Viterbo University. Like his father, Jerry had a way with a pen-stroke and finding the right choice of words (even if his children didn't always agree with how he edited their school papers). Jerry retired in March 2020, and he thoroughly enjoyed the freedom to use his time as he wanted. Jerry spent the last year of his life working on numerous creative endeavors, writing poetry, children's stories and editing for friends. He secured contracts for publishing several children books. The first of which will be released in August 2021. These books will be an everlasting gift for families and children.

For those who had the opportunity to meet Jerry, he always provided a genuine smile, love, and grace for others. He forged many relationships through ordinary daily encounters, at such places as the workplace, the YMCA, the Roncalli Newman Center/English Lutheran Church men's group which he participated in weekly for years, his neighborhood, and community encounters. Jerry was shaped by his loving parents, his strong Catholic upbringing, and his continuing search for faith, truth, and love. During his years in La Crosse, Jerry participated in fellowship with the members of both Roncalli Newman Center and English Lutheran Church. Jerry truly lived out Jesus' Gospel message to love God above all things and to love your neighbor as yourself.

Although his family and friends are heartbroken, they take solace knowing that he is now with his Lord and Savior, forging new trails in his heavenly home.

There will be a private funeral for the family April 3, at English Lutheran Church in La Crosse. The event will take place at 11a.m. CDT and a live stream link will be available on the English Lutheran Church website home page, which can be found at www.englishlutheran.org for those who would like to join virtually. There will also be a celebration of life event in the future, with details forthcoming. In lieu of flowers, the family requests memorials which will be distributed to charities of the family's choice and that were close to Jerry's heart. Jerry's online guestbook may be signed at www.schumacher-kish.com.

To plant trees in memory, please visit our Sympathy Store.
Published by La Crosse Tribune on Mar. 31, 2021.
MEMORIAL EVENTS
Apr
3
Funeral
11:00a.m.
English Lutheran Church
, La Crosse, Wisconsin
Apr
3
Funeral
11:00a.m.
Live streamed at www.englishlutheran.org
Funeral services provided by:
Schumacher-Kish Funeral and Cremation Services - La Crosse
GUEST BOOK
Sponsored by Schumacher-Kish Funeral and Cremation Services - La Crosse.
41 Entries
I had just heard of the passing of Jerry. My deepest sympathy to Viv, the children, grandchildren and other family members. Jerry was a joy to work with at the "Times Review." He also gave me some great advice when I was writing my papers for classes at Viterbo. Hold on to the memories and Take Care!!!
Lisa Breuer (Linder)
April 13, 2021
I am blessed to have known Jerry. When we worked together at Capstone, he was always brimming with kindness, positivity, and generosity. No matter how deadlines and pressures stacked up, Jerry kept smiling and found a way to work through. Over the years, it was wonderful to reconnect with him as jobs and opportunities changed. In every conversation, he would fill me in on his family--he was so proud of his kids. Sending prayers for comfort to his beloved family and many friends. He will be missed.
Lois Wallentine
Coworker
April 9, 2021
I was so fortunate to have known Jerry. He was one of my very first bosses early on in my career right after college and his kindness and encouragement gave me the confidence I needed to be able to keep going with it. Jerry always made time for you and made you feel special and important. His kindness and love for others was boundless, and I will always remember the wonderful impact he made on my life. Sending my sympathy to family and friends. He will be greatly missed by so many.
Carrie Sheely
Coworker
April 8, 2021
I first met Jerry in grade school and throughout high school. He certainly made an impact on my life at a very young age. Condolences to his family.
Tom Dunn, Corpus Christi
April 7, 2021
My condolences on the passing of Jerry. I knew Jerry from a certification class at Viterbo and English Lutheran church. He always had a smile for me and my family. It was a pleasure to have known him and he will be missed.
Teresa Clark
Classmate
April 6, 2021
We are so sorry for your family's loss. Jerry was a kind and thoughtful person. He will be missed.
Kathy & John Storlie
April 5, 2021
We wish we could be there with the entire Ruff clan as you honor a truly blessed and loving husband, father, son, brother, and in our case, older brother of our son- in-law, Steve. Like all the Ruffs, Jerry was fun to be with, but when he requested our daughter, Gloria, to translate some children’s books into Spanish, my pride and gratitude soared. Truly, Jerry was planting seeds in the minds of little ones unknown to us now, and who may be culturally different, but who will have learned of God’s love and will pass it on long after we are gone. As a result we can only echo the words of brothers Paul and Pat: How can [we] keep from singing!
Yes Jerry, as you so artfully said in your poem, “The Fellowship of Trees,” We have this seed of gratitude to give, and we thank you for teaching us to recognize what should be obvious, but is so easily ignored. God speed, dear friend, and thank you for giving us a foretaste of the unbelievably close fellowship that awaits us at the heavenly banquet we will enjoy with Jesus Christ, who makes all good things possible. Much love, Bill and Isabel Beatty, Spokane, WA.

Bill and Isa Beatty
Family
April 5, 2021
So sorry to hear of Jerry's passing. I worked with him at Capstone and he was such a great guy to be around, always so positive and optimistic.
Matt Doeden
Coworker
April 5, 2021
Our condolences on the passing of your father.
We pray for peace and comfort for you and your loved ones at this difficult time.
Jerome and Victoria Muzart
Friend
April 4, 2021
So sorry for your loss. Jerry was a great guy to work with @ the Times Review in LaCrosse. RIP
Steve Kiedrowski
Coworker
April 3, 2021
We were so grateful to join you and your family, Vivian, for the service ‘Remembering Jerry’. Ethan, you have spoken so sincerely, deeply (and with humor) — everything you’ve said we echo with - Amen, that was Jerry!

We have cherished memories of times that our families shared at Roncalli Newman, work with you, Vivian, and times that Ed worked at your south side home in La Crosse. Jerry was so generous (a legacy) in his communication. I treasure the recent notes he sent via Franciscan Spirituality Center’s Reflections from the Center. We grieve his passing; we are grateful for the grace and spirit of his life. We’re sending this note with loving friendship, peace and prayers. Extra hugs to you, Vivian.
Ed & Mary Peters
Friend
April 3, 2021 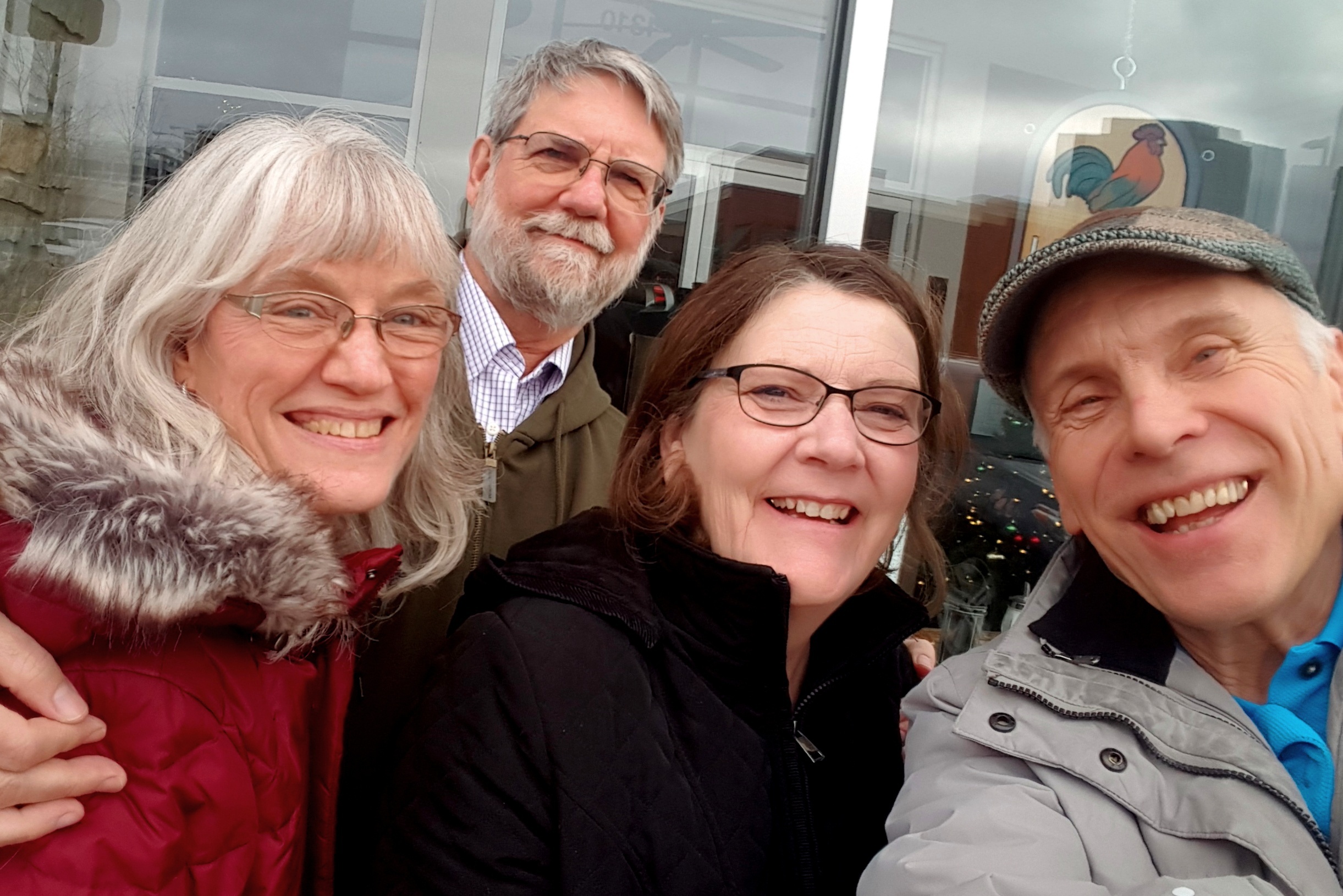