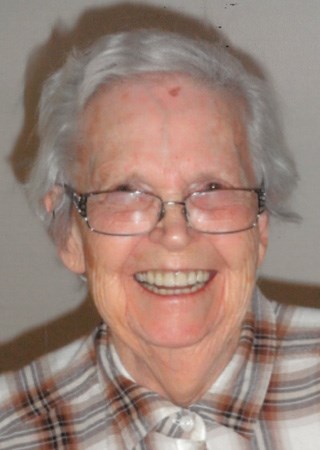 Madeline was born to Ed and Isa Kaukl on November 23, 1925, near Dilly in the Township of Union – Vernon County. At the age of three, the family moved to La Farge and then moved to Readstown where she attended Manning School. She graduated from Readstown High School in 1944. She then attended the Technical School in Madison. She went to work for the Oscar Meyer Company from 1945 – 1951.

In 1951, she accepted a civilian position with the United States Marine Corps. Headquarters in Washington D.C. and also worked for the Pentagon in the Army Ordinance Division until 1957. Maggie married Charles Everhart in 1957 (they later divorced) and had one son, Richard, in 1958. She moved back to Readstown in 1957, and worked for the Vernon County Extension office and the County Health Department. In 1976, Maggie was hired as the Vernon County Personnel Director and retired in 1994 to her home in La Farge. Maggie enjoyed gatherings with family but also loved her solitude. She was an avid reader and loved to watch the Green Bay Packers and the Wisconsin Badgers. She also enjoyed feeding and watching the birds and squirrels.

Survivors include her son, Richard (Rhonda) Everhart; her grandchildren, Elayna (Scotty Soltis) Munson and Dustin (Clara) Munson; her great-grandson, Benjamin; cousins; nieces and nephews. She was preceded in death by parents and her brothers, Robert, Ivan and Marvin.

A Funeral Service will be held at 11:00 a.m. on Monday, September 27, 2021, at the La Farge Free Methodist Church. Visitation will be held from 10:00 a.m. until the time of the service. Madeline will be laid to rest at Manning Cemetery. Online Condolences may be expressed at www.vossfh.com.