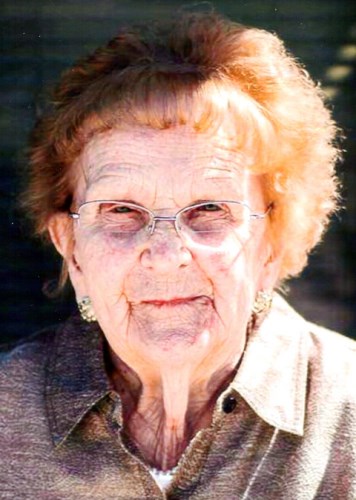 DEPERE - Margaret Lindahl, 94, of DePere, WI, and nearly a lifelong resident of rural Stoddard, WI, passed away Tuesday, September 14, 2021, at DePere where she had been a resident at Angels Touch Assisted Living since February of 2018.

She was born December 5, 1926, to Hilmer and Elise (Role) Stendahl in the Town of Coon. Margaret was baptized and confirmed at Coon Valley Lutheran Church. She graduated from Westby High School in 1944 and worked in La Crosse where she met her husband at the Concordia Ballroom. She married Selmer Lindahl on May 15, 1947, at Coon Valley Lutheran Church.

Margaret and Sam dairy farmed their married life on Hamburg Ridge, Stoddard, milking registered Brown Swiss cows. Throughout their farming career, Margaret maintained meticulous farm records, in addition to the daily milking chores and raising her family. She was the sweetest person and a devoted and supportive wife, mother and grandmother. All this sprinkled with her witty sense of humor, along with being a good board game and card player. She loved music. She appreciated and kept her family's Norwegian traditions alive, baking sandbakkles, lefse, and all sorts of goodies.

For several years in their retirement, they enjoyed being snowbirds to their daughter's home in Arizona. They also spent time creating and painting wood crafts, gifting them to their family. They were long-time members of Good Shepherd Lutheran Church in La Crosse where she enjoyed contributing baked items to their annual fundraiser. She lived by and often advised, "If you can't say something nice, don't say anything at all". We could all do with a bit of her wisdom.

A heartfelt thank you to Charlotte Travelli for her steadfast care and concern over the years.

As was her desire, a family graveside service will be held at Viroqua Cemetery at 1:00 p.m. on Saturday, October 16, 2021 with Pastor Julie Wollman of Coon Valley Lutheran Church officiating..

Memorials may be given to: Good Shepherd Lutheran Church, La Crosse, WI.

"What we have once enjoyed deeply we can never lose. All that we love deeply becomes a part of us". Helen Keller. Margaret's special memory will live on.

Cotter Funeral and Cremation Care in DePere is assisting the family. Online condolences may be expressed on her tribute wall at www.cotterfuneralhome.com.